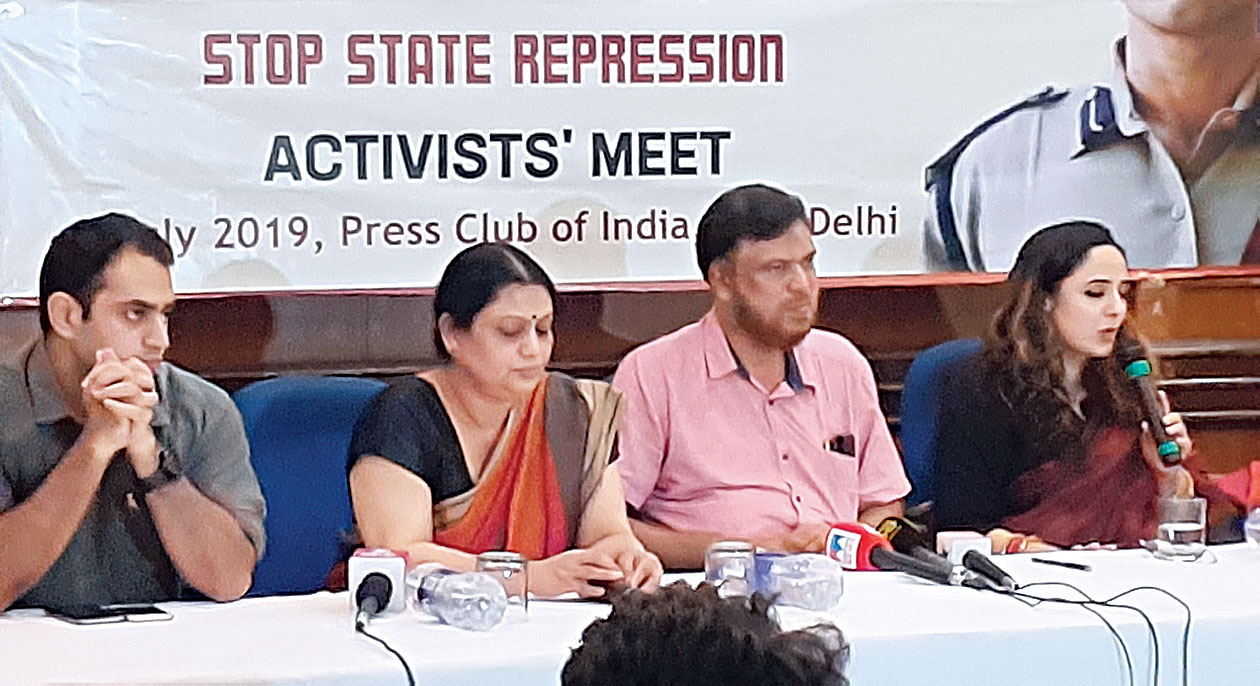 The wife and son of Sanjiv Bhatt, the former IPS officer who was sentenced to life in prison last month for the murder of a detainee in 1990, addressed activists here on Sunday to “campaign for justice.”

Bhatt was suspended in 2011 after he filed an affidavit in the Supreme Court accusing Narendra Modi, then Gujarat chief minister and now Prime Minister, of involvement in riots in the state in 2002.

The officer was dismissed in 2015 over unauthorised absence and other charges. Bhatt was arrested last year for allegedly fabricating evidence in a 1996 case and has been in Palanpur jail for more than 10 months.

Addressing a media conference after a meeting held by the National Confederation of Human Rights Organisations, Sweta told reporters that besides appealing against the conviction, she was speaking at public events in different parts of the country to highlight the lacunae in the judgment and the harassment of their family.

She said: “Our security was withdrawn. Just before a bail hearing (in January), a dumper truck without a registration plate and in a place where heavy vehicles are not permitted rammed into my car and dragged us until we hit a divider. The driver of the truck had no papers on him. Half of my house, which is 23 years old, has been broken down by authorities (last year), and we have been billed Rs 2.5 lakh as demolition charges. Wherever I go I am followed and photographed. Why do you think it is happening?”

On October 30, 1990, police had arrested 133 people after a communal riot in Jamnagar district’s Jamjodhpur town during a bandh against L.K. Advani’s arrest in Bihar. One of those arrested, Vishwa Hindu Parishad worker Prabhudas Vaishnani, died in a hospital in Rajkot 10 days after his release. Bhatt was an assistant SP of Jamnagar at the time.

Sweta Bhatt said only 32 of the 300 witnesses listed by the prosecution were examined, and the defence was not allowed to produce any witnesses. She sought immunity for her husband under Section 161 of the Bombay Police Act that exempts police officers from prosecution if the government has not sanctioned their prosecution within two years of the occurrence of the alleged offence while discharging official duties.

“I spend five days a week travelling, talking to people... He (Sanjiv Bhatt) is still respected so much that I just need to say my name and people talk to me. He is so honest that he doesn’t use a phone in jail (illegal but widely used) and only eats jail food. I only meet him in court because whenever I go to jail, they ask me to come later or wait for hours; they create an atmosphere where it is impossible to talk to him. My husband wouldn’t like me to go and meet him in this way,” she added

The 450-page judgment is in Gujarati and is being translated so that renowned lawyers from other states can represent his appeal.

On Sunday, Sweta addressed the media conference along with Deepika Rajawat, the lawyer who represented the family of a shepherd girl who was raped and murdered in Jammu’s Kathua last year.

Shantanu Bhatt, the son of Sweta and Sanjiv Bhatt, said: “This is a desperate act by a desperate government and people have to question this and they will question it only if the press tells them the truth. What is being peddled on various platforms are half-truths. We only have the truth on our side.… We can’t do this as individuals. Everyone needs to hold the government accountable.”