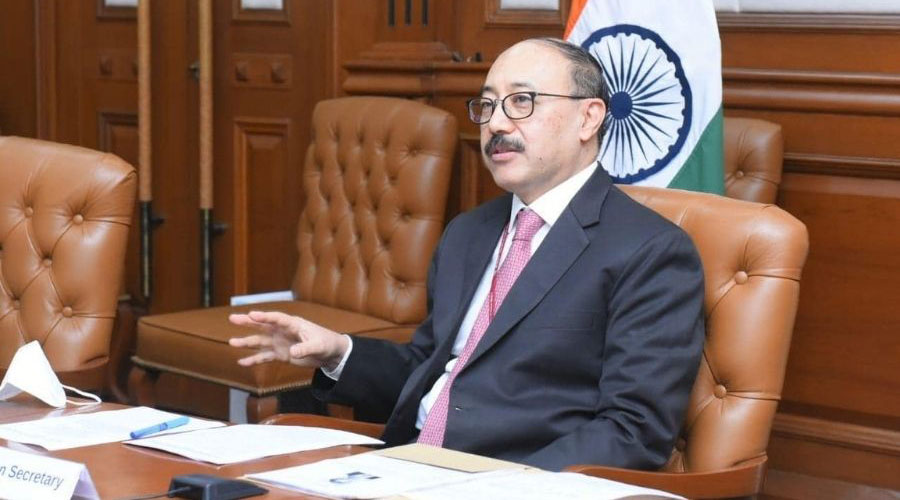 Foreign Secretary Harsh Vardhan Shringla has raised matters relating to India's security and emphasised New Delhi's interest in seeing Myanmar's return to democracy at earliest as he called on the Chairman, State Administrative Council and other senior representatives in the country.

Shringla is here on a two-day working visit, in the first such high-level outreach from India after Myanmar's military deposed the democratically-elected government of Aung San Suu Kyi in a coup on February 1.

According to the Ministry of External Affairs (MEA), Foreign Secretary Shringla called on the Chairman, SAC and other senior representatives and held meetings with members of civil society and political parties, including the National League for Democracy.

During his meetings, the Foreign Secretary emphasised India's interest in seeing Myanmar's return to democracy at the earliest; release of detainees and prisoners; resolution of issues through dialogue; and complete cessation of all violence, it said in a statement.

He reaffirmed India's strong and consistent support to the Association of Southeast Asian Nations (ASEAN) initiative and expressed hope that progress would be made in a pragmatic and constructive manner, based on the five point consensus, the MEA said.

The visit also provided an opportunity to raise matters relating to India's security, especially in the light of the recent incident in Churachandpur district in southern Manipur, the MEA said.

Foreign Secretary stressed the need to put an end to any violence and maintain peace and stability in the border areas.

Both sides reiterated their commitment to ensure that their respective territories would not be allowed to be used for any activities inimical to the other, it said.

India shares an approximately 1,700 km-long border with Myanmar. Any developments in that country have a direct impact on India's bordering regions, it said, adding that peace and stability in Myanmar remain of utmost importance to India, specifically to its North Eastern Region.

Myanmar is one of India's strategic neighbours and it shares its border with a number of northeastern states including militancy-hit Nagaland and Manipur.

India has been concerned over some militant groups from the North-East region taking shelter in Myanmar.

In the context of Myanmar's fight against the COVID-19 pandemic, he handed over one million doses of "Made in India vaccines to the Myanmar Red Cross Society.

A part of this consignment would be utilised for communities living along Myanmar's border with India. A grant of 10,000 tonnes of rice and wheat to Myanmar was also announced, it said.

The Foreign Secretary expressed India's continued support for people-centric socio-economic developmental projects, including those along the India-Myanmar border areas, as well as India's commitment for expeditious implementation of ongoing connectivity initiatives such as the Kaladan Multimodal Transit Transport Project and the Trilateral Highway.

As a democracy and close neighbour, India has been involved in the democratic transition process in Myanmar and in this context has worked with various stakeholders in developing capacities on democratic systems and practices.

India proposes to renew these efforts for Myanmar to emerge as a stable, democratic, federal union in accordance with the wishes of the people of Myanmar, the MEA added.

On February 1, Myanmar's military grabbed power in the coup and imposed a state of emergency after detaining Nobel laureate Suu Kyi and other leaders of her National League for Democracy (NLD).

As the Myanmarese military continued its crackdown on civilians protesting against the coup, India in April condemned any use of violence and said it stands for the restoration of democracy in Myanmar.

According to reports, hundreds of people including children were killed in the crackdown by Myanmarese authorities.

Earlier this month, Suu Kyi was sentenced to four years of imprisonment by a court in Myanmar after holding her guilty of inciting dissent. Her sentence was later reduced from four years to two years.

India said it is "disturbed" at the verdicts relating to Suu Kyi and others.