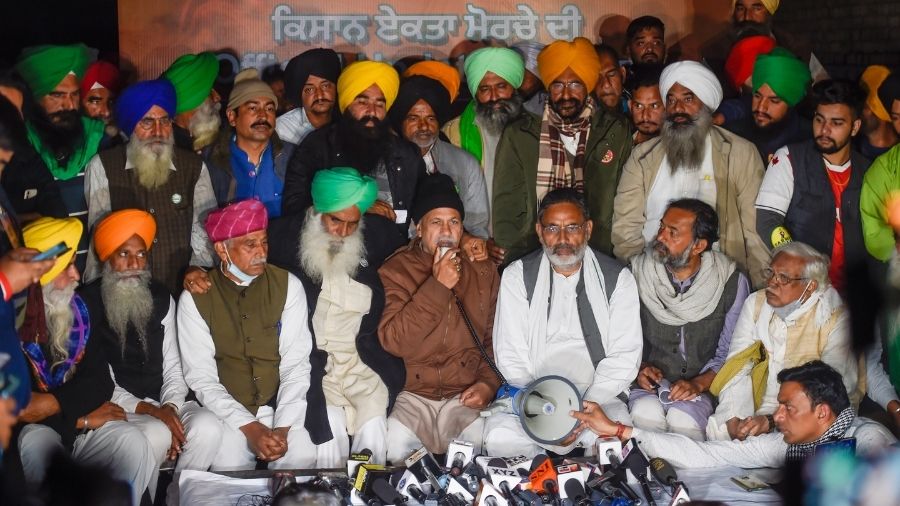 Protesting farmer unions on Wednesday said that the government should not repeat “meaningless” amendments to the new agri-marketing laws but come up with a concrete proposal in writing during the next round of talks.

A farmer leader, while addressing a press conference on Wednesday, said they were ready for talks, but first the Centre should send a concrete proposal for that to happen.

“Farmer unions are ready to talk to the government and are waiting for the government to come to the table with an open mind,” Swaraj Abhiyan leader Yogendra Yadav added.

All India Kisan Sabha leader Hannan Molla claimed the government wanted to tire the farmers out so that the protest would end.

Earlier, Union agriculture minister Narendra Singh Tomar said the government would  continue with reforms in the farm sector as they were still due in many areas, but was hopeful that the farmers would fix a date for the next round for talks.

“I am fully hopeful that our farmer unions will discuss... If they give a date and time, the government is ready for the next round of talks... I am hopeful that we will move towards resolving the issue,” he said.

The minister said any agitation can be resolved only through dialogue as has been the case always in history and urged the protesting unions come forward for the next round of talks.

The government has already sent a draft proposal to unions offering at least seven amendments to the three legislations that were enacted in September.

"I am fully hopeful that our farmer unions will discuss... If they give a date and time, the government is ready for the next round of talks... I am hopeful that we will move towards resolving the issue," Tomar told reporters.

At least five rounds of formal talks with the protesting unions have failed to break the deadlock, but a number of other farm groups have been meeting the government in the meantime to extend their support to the new laws.

While the government has presented the three laws as major reforms, protesting farmers fear they would weaken the mandi and MSP systems and leave them at the mercy of big corporates. However, the government has maintained these apprehensions are misplaced and has accused opposition parties of misleading the farmers.

The government is ready to listen to farmers' issues with an open heart, he said, while wishing the entire farming community on the occasion of the National Farmers Day, celebrated to mark the birth anniversary of India's fifth Prime Minister Chaudhary Charan Singh.

Stressing that a solution can be reached only through dialogue, Tomar said, "History is witness to this fact. However old and strong the protest is, the end and the solution to a protest are reached through dialogue only."

Farmer unions should discuss the government's draft proposal and inform them if they want to add or delete anything, he said.

Separately, addressing a delegation of the Confederation of NGOs of Rural India (CNRI) that extended their support to the farm laws, the minister said agriculture is an important sector for India.

The government "is and will be" committed to strengthening the sector, he said.

"In the last six years, efforts have been made to reform the farm sector to a large extent. There are still many areas left where reforms are due," Tomar noted.

The Minister said there were recommendations for reforms in the farm sector in the past also by experts, unions and state chief ministers, but the previous government might have faced difficulties in converting the recommendations into laws.

But the Modi government brought these reforms in the agriculture sector and most farmers are in favour of these laws, while some are protesting, he added.

The minister also received six boxes of letters with signatures of 3,13,363 lakh farmers from 20 states, including Punjab through NGO CNRI in support of the farm laws. Of these, 12,895 farmers from Punjab have signed in favour of the laws, while 1.27 lakh such farmers are from Haryana.

Minister of State for Agriculture Kailash Chaudhary and Agriculture Secretary Sanjay Aggarwal were also present in the meeting.