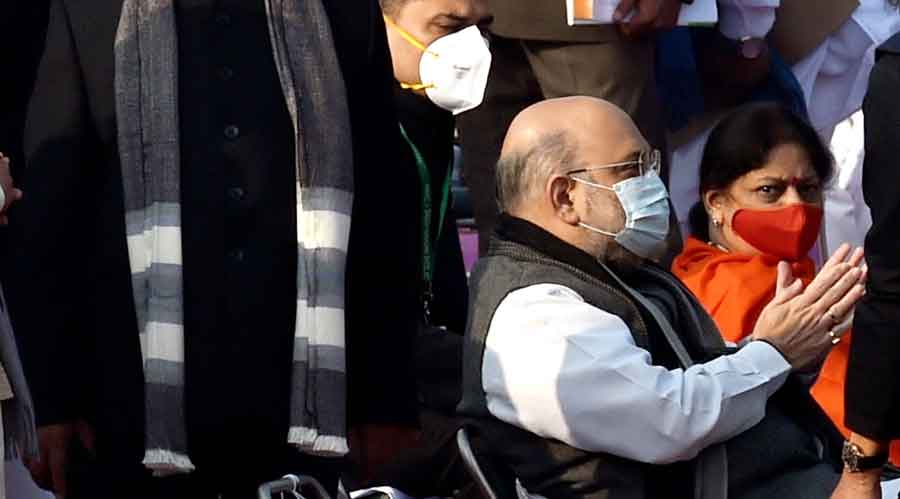 Union home minister Amit Shah, under fire for the intelligence failure and police’s lack of preparation after several places in Delhi witnessed chaos and violence on Republic Day, caused surprise by remaining silent through Wednesday.

An FIR has been filed against several senior leaders of the Samyukta Kisan Morcha.

Sources said Shah, who has charge of law and order in Delhi, had at a meeting directed strict action against farmer leaders who had given the police a written undertaking of a peaceful tractor rally through designated routes.

But the rally deviated from the assigned routes at some places, leading to chaos and violence.

Many farmers believe the police facilitated the chaos by allowing those at the front of some of the convoys to veer off route, and then cracking down when those behind innocently tried to follow them.

Srivastava told a news conference that the police had made thorough preparations and this was why “no one died in the violence”. One of the protesters died near the ITO when his tractor overturned, which the police say was an accident.

The farmers claim that police action caused the mayhem that led to the accident. Some have alleged the farmer was shot by the police.

Srivastava said 394 police personnel had been injured in the violence but did not specify the nature of the injuries. There is still no estimate of how many farmers were injured.

Srivastava claimed the police had realised by Monday evening that the farmer leaders planned to deviate from the agreed plan and were pushing aggressive and militant elements to the forefront. He did not explain why the police, with such advance knowledge, had failed to prevent the chaos.

Srivastava said: “The farmer unions have betrayed us by not honouring the agreement. Nineteen accused have been arrested and 50 detained so far for questioning.”

He said 25 FIRs had been registered.

Late in the evening, the name of Deep Sidhu, a Khalistani sympathiser and former BJP campaigner, was added to an FIR.

Srivastava said the police’s crime branch, special cell and district police would work on the case and a special investigation team would be formed.

“Leaders like Satnam Singh Pannu delivered provocative speeches at Mukarba Chowk. Darshan Pal Singh too violated the agreement. From Ghazipur, they started their movement from 8.30am while the time given to them was noon,” Srivastava said.

But Srivastava did not explain how a few groups of farmers had succeeded in reaching the ITO in central Delhi and the Red Fort despite the heavy police presence.

Some of the farmers who had arrived at the Red Fort said the police had not put up any barricades on the way.

“As we approached the Red Fort, the police did not stop us at all. They were mute spectators. This suggests the police wanted the protesters to enter the Red Fort and engage in violence,” said Jagvir, a farmer.