The prime minister requested the farmers to end their agitation and return to their fields and homes, urging them to 'make a new beginning' and 'move forward afresh' 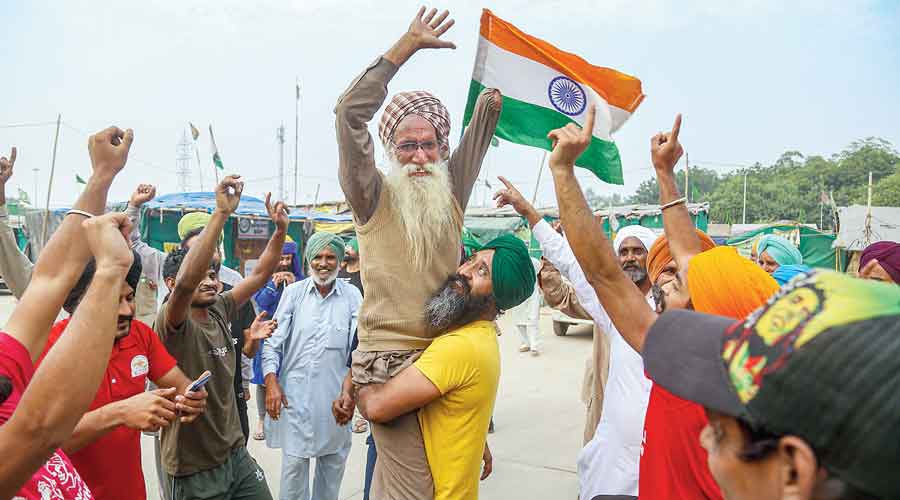 Prime Minister Narendra Modi on Friday apologised to the Indian people and announced a decision to repeal the three farm laws that have triggered a yearlong agitation, marking a rare capitulation before public opinion by a leader prone to boast about his “56-inch chest”.

Modi said he was taking the step “for the country” but did not explain himself. Many social media users, the Congress and some BJP leaders attributed the decision to the upcoming Assembly polls, especially in Punjab and Uttar Pradesh.

The Prime Minister’s surprise announcement, made in a sudden 9am address to the nation, came on Guru Nanak’s birth anniversary, implying an attempt to woo the minority Sikh community that has been spearheading the farmer protests in Punjab and at Delhi’s borders.

Modi announced the repeal towards the end of his around 20-minute speech, still insisting the contentious laws were beneficial for farmers and apologising only because his government had failed to convince “some” farmers about this.

“Friends, while apologising to countrymen, I want to say with a sincere and pure heart that perhaps something was lacking in our dedication that we could not explain the truth, which was clear as daylight, to some of our farmer brothers,” he said, a week before the farmers’ siege of Delhi completes one year.

Modi said: “But today, Prakash Parv, is not the time to blame anyone. Today I want to tell the country that we have decided to repeal the three farm laws.”

He added: “Whatever I did (so far) was for farmers. What I’m doing is for the country.”

The agitating farmers had argued the three laws would leave them open to exploitation by big companies.

Modi said the three laws would be revoked during the upcoming winter session of Parliament, expected to start in end-November. He requested the farmers to end their agitation and return to their homes, urging them to “make a new beginning” and “move forward afresh”.

But the Prime Minister offered no apology or regret for the relentless campaign by some BJP leaders to demonise the protesting farmers as “anti-nationals”, “Maoists” and “Khalistanis”.

Nor did he apologise for the deaths of hundreds of farmers during the long protest, including the four farmers mowed down by a car owned by one of his ministers in Lakhimpur Kheri, Uttar Pradesh.

Ministers and BJP leaders rushed to hail the Prime Minister’s “statesmanlike” move, but some privately acknowledged the climb-down was very “un-Modi-like”.

Only once before had Modi backtracked on a reform move — a minor one compared with the farm laws, and one that came early during his first stint as Prime Minister. Modi had in 2015 quietly shelved a pro-market land acquisition ordinance that had provoked Opposition protests and a “suit boot ki sarkar” jibe from Rahul Gandhi.

The withdrawal of the farm laws is much bigger, especially since Modi had led the campaign from the front, defending the reforms, viciously attacking the Opposition and asserting his firmness not to yield.

Besides, the three laws, railroaded through Parliament, reflected the government’s bullishness after the electoral mandate of 2019, which had also emboldened it to bulldoze all opposition and force constitutional changes and a brutal clampdown on Jammu and Kashmir.

In Kashmir too, on Thursday, the authorities buckled before public protests, announced a probe into a disputed “encounter” and reversed a decision not to hand over the victims’ bodies to their families.

Home minister Amit Shah hailed Modi’s decision as “statesmanlike” and tweeted: “It also shows there is no other thought except the welfare of each and every Indian for him.”

Some in the BJP suggested the “national interest” that dictated the decision was a perception in the Sangh parivar that a feeling of persecution among Sikhs was bringing them closer to Muslims.

The government’s climb-down comes just months ahead of Assembly elections in Punjab and the key state of Uttar Pradesh, and shortly after a series of by-election defeats had prompted it to lower fuel prices.

Western Uttar Pradesh, which had become a hub of the farm protests along with Punjab and Haryana, accounts for around 130 of the state’s 403 Assembly seats. Party insiders said an internal assessment suggested the raging anger among farmers in the region could cause severe electoral damage.

The party is worried that the Lakhimpur Kheri massacre has spread the message of the farm protests across the state’s central and eastern districts too.

The recent by-election drubbings in Himachal Pradesh and Rajasthan have alarmed the party, as has the alliance between the Samajwadi Party, Rashtriya Lok Dal and smaller outfits in Uttar Pradesh.

“The by-election results led the government to cut petrol and diesel prices and now the decision to repeal the farm laws,” a BJP MP from Uttar Pradesh said.

Elections are due early next year in Uttar Pradesh, Uttarakhand, Punjab, Goa and Manipur, and later in the year in Gujarat and Himachal Pradesh.