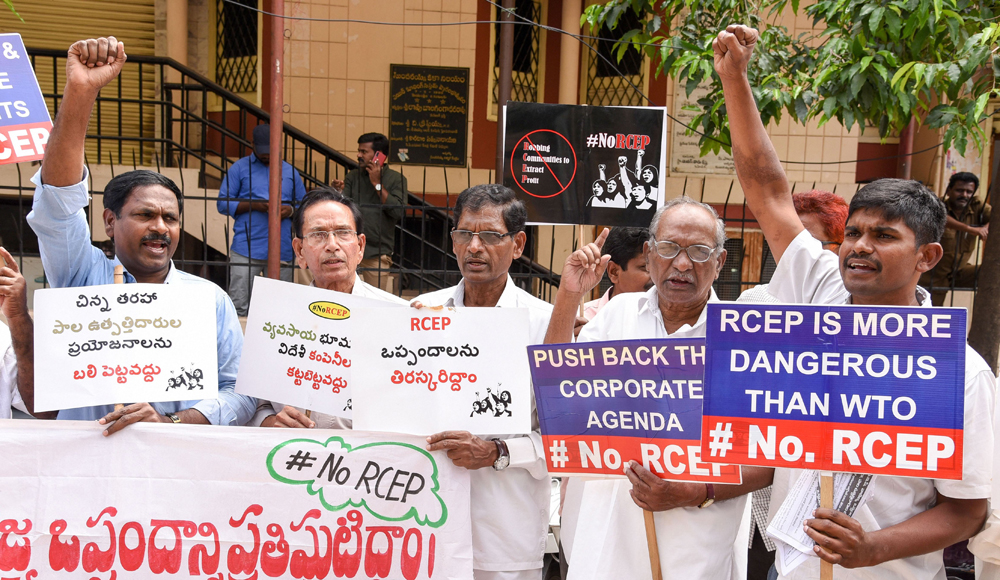 Farmers’ representatives on Sunday signalled their intent to intensify protests against a proposed free trade agreement between India and 15 Asia-Pacific region countries that they fear will flood local markets with inexpensive foreign farm, dairy and plantation products.

Members of the Alliance for Sustainable and Holistic Agriculture (Asha), the Bharatiya Kisan Union (BKU) and the Indian Coordination Committee of Farmers Movement (ICCFM) have urged the state governments to oppose any proposals in the RCEP that might affect farmers.

“Farmers in India will be exposed to an uneven playing field,” said Kavitha Kuruganti, a coordinator with Asha.

“We’re worried that foreign farm products will be cheaper because of the comparative efficiency advantage in foreign farms or because they are subsidised by foreign governments and dumped in India.”

The RCEP is intended to be a free trade agreement between the 10 Asean countries and six trade partners: Australia, China, India, Japan, South Korea and New Zealand. The 16 countries account for about 25 per cent of the global gross domestic product and about 30 per cent of global trade.

“We think dairy producers and the producers of coconut, oil palm, areca nut, tea, coffee, rubber and cardamom would be the ones at the greatest risk,” Kuruganti said. “But cotton and wheat producers too might need to contend with Chinese and Australian producers.”

Farmer group representatives, citing an example, said that dairy cooperatives in India now earn about Rs 280 to Rs 300 a kilogram of milk powder. They are worried that milk powder from Australia or New Zealand might become available at Rs 180 to Rs 200 a kilogram.

The farmers are also fearing that the RCEP might allow cheap imports of oil palm from Malaysia and Indonesia and rubber, tea, cardamom and vanilla from other Southeast Asian countries.

The ICCFM, Asha and BKU had joined several other farmers’ organisations to protest against the RCEP in towns across Andhra Pradesh, Haryana, Karnataka, Kerala, Madhya Pradesh, Maharashtra, Tamil Nadu, Telangana, Uttar Pradesh and Odisha on October 24 and 25. “We’re planning to continue this campaign next week,” said Dharmendra Malik, a BKU member.