Advertisement
Home / India / ‘Extraordinary horrors inflicted on Muslims of UP’

‘Extraordinary horrors inflicted on Muslims of UP’ 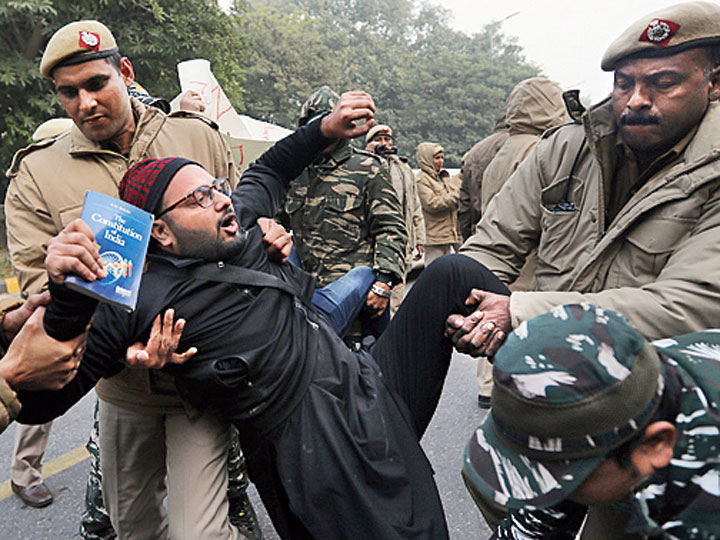 Over the past month, there have been protests across India on the CAA/NPR/NRIC process. Universities have been on the frontline, suffering attacks by storm troopers and even more so by, shamefully, uniformed keepers of law and order.

The Jamia Millia Islamia leads the roll of honour, followed by Jawaharlal Nehru University and Aligarh Muslim University. The attacks on these centres of learning have been the focus of attention, even as obfuscation continues to prevent an accounting for the misdeeds of security personnel. Meanwhile, the women of Shaheen Bagh continue to shed light through wintry nights on the aspirations of their fellow citizens across India.

Surprisingly, however, scant attention has been paid to the extraordinary horrors inflicted on the hapless Muslims of Uttar Pradesh. Unable to accept the message demanding equality as citizens from the peaceful protesters sheltering behind the national flag and the Constitution, the saffron-clad chief minister of the state asked for “revenge”. This is perhaps a unique instance, from any corner of the world, of a person responsible for the welfare of those in his charge seeking “revenge” because they would not bow to the majoritarian diktats of his party.

That this message was well understood by his administration, including the police, became clear as a reign of terror was unleashed on the Muslims. The attitude of the Uttar Pradesh police was perhaps best appreciated by the Bengal BJP president, who was happy that they shot protesters like dogs.

Inadequate reportage by the media kept under the radar the chilling details of what was transpiring in the neighbourhood of Delhi until some fact-finding teams visited many of those affected and some who had lost their sons and brothers to police firing.

A “people’s tribunal” was held in Delhi on January 16 to expose the shocking chain of events that swept the capital and western Uttar Pradesh, and which continue to cast their leaden weight on the lives of the people.

As with so much else prevailing in the country as a whole today, where the establishment creates neo-truth, cheered on by fawning acolytes, the fate of the Uttar Pradesh Muslim became a casualty. The jury for the people’s tribunal was made up of former justices of the Supreme Court, a former chief justice of Delhi High Court, eminent academics and retired civil servants.

The jury was “deeply worried and dismayed by the testimonies placed before it. It is convinced that the entire state machinery, led from the top, acted with grave prejudice and perpetrated violence targeting one particular community, the state’s Muslim population, and the social activists leading the movement”.

Having heard the testimonies of field workers, lawyers, human rights defenders, civil society activists, doctors and eyewitnesses and also looked at the videos of victims, the jury found that “the UP police has been guilty of inflicting enormous violence targeting the Muslim community, peaceful protesters, and not even sparing those (who) were not involved in the protest”.

Apart from the violence on the protesters, the police brutality included “the arrest of and filing of false cases against innocent people; the destruction of vehicles and property by entering people’s homes, as well as CCTV cameras; threats to and intimidation of people picked up (for) speaking the truth about what happened; communalised abuses against victims; custody violence even on minors; firing and killing people without following the law; preventing medical personnel from treating the injured and threatening the injured against accessing medical care”.

The testimonies at the tribunal revealed that in keeping with the establishment’s disdain for the truth, the victims’ complaints about police brutality, violence and destruction of property were either not filed or were filed incorrectly. On the other hand, thousands of FIRs were filed against unnamed people on the charge that they had become violent, the intention being to continue harassment and intimidation. The jury found that the issuance of notices to the public for damage allegedly caused to public property, without specifying culpability in a court of law, was entirely illegal.

One of the most chilling revelations to emerge from the tribunal was the repeated charge that hospitals would not admit even seriously injured people as they were apparently concerned about displeasing the government.

As a consequence some died without treatment or while being shifted from one hospital to another. Such conduct on the part of the state or the institution would be a violation of Article 21, Supreme Court rulings and international treaties to which India is a signatory, besides the matter of the Hippocratic oath.

There were allegations that ambulances were not provided when necessary, when the Red Cross is honoured even in war. This despicable conduct by those concerned would likely have put them in front of an international tribunal investigating human rights had Uttar Pradesh been an independent country.

The jury concluded: “The state of affairs in UP shows a complete collapse of rule of law. In fact, the very state administration that is charged with protecting the rule of law is perpetrating violence upon its own people.”

The geographical heart of India, where two of our holiest rivers merge, where Lord Ram was born and where Gautam Buddha gave his first sermon, has today become the Heart of Darkness.

Deb Mukharji, a retired diplomat who has been India’s ambassador to Nepal and high commissioner to Bangladesh, was a member of the jury at the ‘people’s tribunal’ that looked into allegations of police atrocities