Europe’s MPs are welcome, not India’s 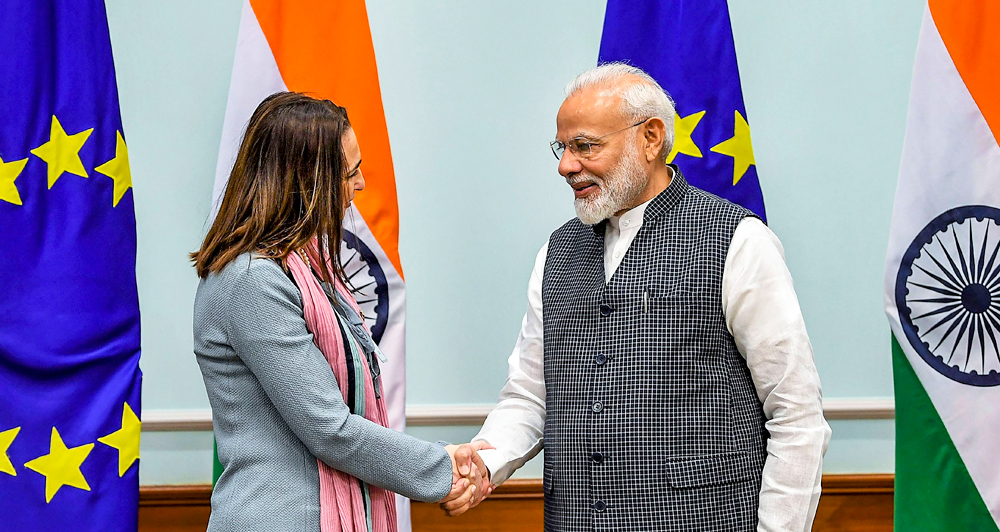 Twenty-seven members of the European Parliament — many of them from Far-Right parties — will visit Srinagar on Tuesday with the approval of the central government in an apparent bid to address criticism coming from international quarters on the prolonged clampdown in Kashmir.

The European MPs are visiting India in their private capacity.

This will be the first visit by any foreign delegation to Kashmir — still out of bounds for Indian politicians — after August 5 when the constitutional arrangement of the state and its geographical contours were changed by the Narendra Modi government.

The visit will take place exactly a week after searching questions on the clampdown were raised at the US Congressional hearing on human rights in South Asia with some American lawmakers contending when there is such a clampdown, one has to presume there are human rights violations.

Ahead of their visit to Srinagar, the members of the European Parliament (MEPs) from nine countries met Prime Minister Modi at his residence.

Welcoming them, the Prime Minister said their visit to Jammu and Kashmir should give the delegation a better understanding of the cultural and religious diversity of the state, apart from a clear view of the development and governance priorities of the region. They were also briefed about the situation in the state by national security adviser Ajit Doval, whose office is said to be facilitating the visit.

The European Union office in the capital said the MEPs were on a private visit, underscoring that this is not an official delegation of the European Parliament.

“The MEPs must have been invited in their private capacity,” a EU official in Delhi told The Telegraph.

Even before the identity of the MEPs and their political affiliations were known, the visit got mired in controversy as Indian leaders questioned how politicians from abroad were being allowed to visit the state when they themselves have been turned away by the government.

“Then why were Indian political party leaders and MPs repeatedly prevented from exiting Srinagar airport? I was allowed to enter Srinagar only when the Supreme Court permitted over my habeas corpus petition. Even today Indian MPs are not allowed while Modi welcomes MEPs! #Kashmir,” tweeted CPM general secretary Sitaram Yechury.

Yechury was the first mainstream politician allowed to enter Kashmir, following court intervention, after being sent back on two earlier occasions from the airport itself. During his second attempt, Yechury was part of a delegation of several party leaders, including former Congress president Rahul Gandhi.

Former Jammu and Kashmir chief minister Mehbooba Mufti, who is under detention and whose Twitter account is updated by her daughter, tweeted: “If scrapping Article 370 integrated J&K into India, why is Shri Rahul Gandhi barred from visiting Kashmir? Instead, a group of far right & fascist leanings EU MPs is allowed by GOI. Your ticket to Kashmir is possible only if you’re a fascist with a visceral hatred for Muslims.” 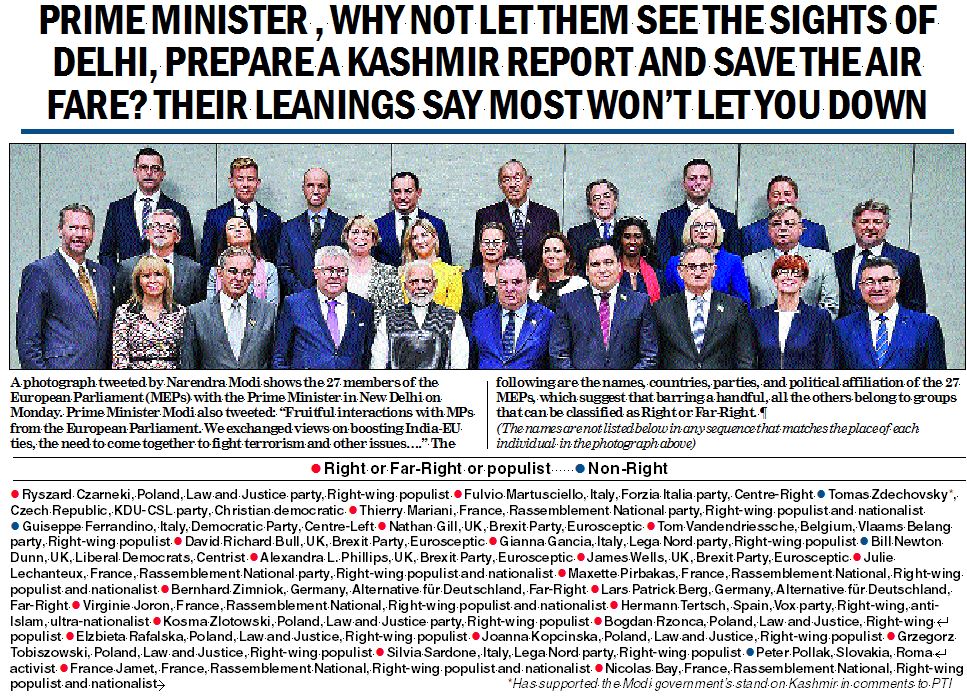 It was not just the Opposition that was raising questions about the MEPs’ visit. The BJP’s Rajya Sabha MP, Subramanian Swamy, too, objected to it.

“I am surprised that the MEA has arranged for European Union MPs, in their private capacity (Not EU’s official delegation), to visit Kashmir area of J&K. This is a perversion of our national policy. I urge the government to cancel this visit because it is immoral,” he tweeted.

The external affairs ministry maintained a studied silence through the day on the visit.

As it became evident that the MEP delegation has several Right-wing figures with a few exceptions, the entire purpose of the visit got clouded in suspicion.

“If some, hopefully not most, European MEPs, as is emerging, are from fascist, anti-immigrant & Islamophobic parties, then the BJP and the government may have erred seriously in their unseemly hurry to get approval of westerners, of whatever ilk. It shall be counter-productive abroad,” tweeted former diplomat K.C. Singh.

The delegation is made up mostly of MEPs representing conservative, Right-wing or Far-Right parties, including the Alternative für Deutschland (AfD) of Germany, the Rassemblement National of France, Law and Justice of Poland, the Brexit Party of the UK, the Vlaams Belang of Belgium and the Vox of Spain.

Some of them had articulated the official Indian position on Kashmir during a debate in the European Parliament in September, seeing the entire issue essentially through the prism of terrorism.

On Monday, PTI quoted one of the MEPs, Tomas Zdechovsky of the Czech Republic, as saying in New Delhi: “It (the abrogation of Article 370) is India’s internal matter as Kashmir is its part. It is the prerogative of Indian government to take internal decisions. We are with India on this.”

What has clearly left many policy wonks bewildered is that such a delegation of insular politicians should be allowed to visit Kashmir when Indian politicians, foreign journalists based in India, and US diplomats here have been denied permission.