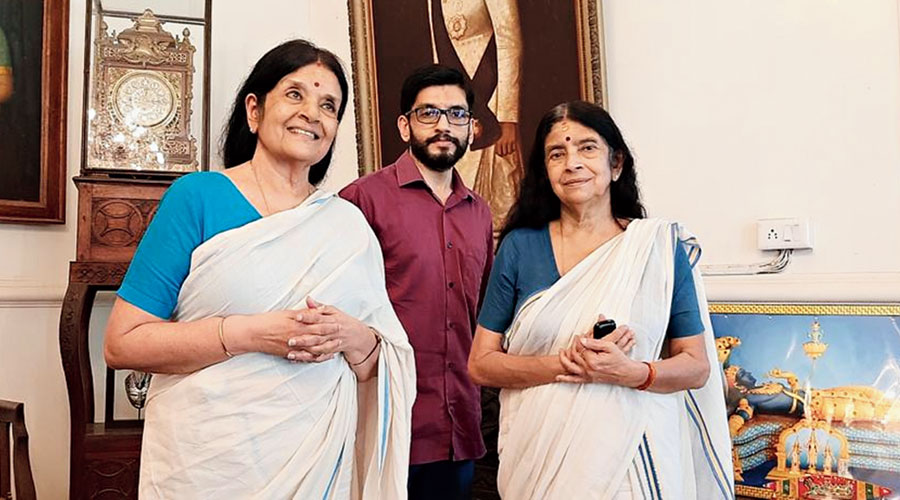 Gowri Parvathy Bayi (left), Aditya Varma and Gowri Lakshmi Bayi, some of the members of the erstwhile Travancore royal family, at the Kowdiar Palace in Thiruvananthapuram on Monday
Sourced by Correspondent
Our Legal Correspondent   |   New Delhi   |   Published 14.07.20, 02:55 AM

The Supreme Court on Monday upheld the erstwhile Travancore royal family’s hereditary rights as “shebait” (custodian) of the Sree Padmanabhaswamy Temple in Thiruvananthapuram, whose management had earlier been vested in the Kerala government by a 2011 high court judgment.

The apex court bench of Justices U.U. Lalit and Indu Malhotra added that the administrative committee managing the temple will be overseen by the Thiruvananthapuram district judge, who will head the panel.

The suggestion was made by the erstwhile royal family itself, which was accepted by the court with a “minor change”.

The verdict was accepted by the Left-run Kerala government that had otherwise fought hard for a say in the management of temples on the ground that their wealth belongs to the people.

Legend has it that after King Marthanda Varma, known as the Maker of Modern Travancore, ruthlessly crushed a rebellion by local landlords in the eighteenth century, he donated the kingdom to Sree Padmanabhaswamy and ruled as the deity’s “vice-regent”.

Since then, the kings have been known as Sree Padmanabha Dasa, and the temple has remained the biggest landmark in the capital city. It is said that Thiruvananthapuram — “the city of Lord Anantha” --- derives its name from the temple, where the deity is represented through the Ananthashayanam (sleeping on the serpent) form.

On Monday, responding to the verdict, Gowri Parvathy Bayi, a senior member of the erstwhile royal family that is still widely venerated in Thiruvananthapuram, said: “We regard today’s Supreme Court verdict as the blessing of Padmanabhaswamy, not just for the family but for all his devotees. We pray for his continued benevolence on all humanity to keep us safe and well. Thank you all who stood by us in these difficult years. God bless you all and keep you safe.”

According to the judgment, the instruments of accession or covenant that the erstwhile Maharaja of Travancore had signed with the Indian government in 1949 would not end the former royals’ control over the temple.

The apex court referred to several earlier judgments, including the Ayodhya verdict by a constitution bench, to say the management of the temple would be vested with its traditional custodian.

It held that the death of Sree Chithira Thirunal Balarama Varma, who had signed the covenant, “would not in any way affect the shebaitship of the temple held by the royal family of Travancore”.

According to the judgment, “after such death, the shebaitship must devolve in accordance with the applicable law and custom upon his successor… must include his natural successors according to law and custom”.

“Unless and until the line of succession of the shebaitship and in-charge of the administration is completely extinct, there can be no question of escheat as observed by the high court,” it said.

The executive officer of the temple had challenged the Kerala High Court judgment, which had come on a petition from an advocate, T.P. Sundara Rajan.

In its appeal before the apex court, the royal family said it was merely seeking the right, as a trustee of the temple, to manage and administer it.

It said: “The temple is a public temple and no claim can probably be made by the petitioner or anyone to owning the temple or its treasures.”