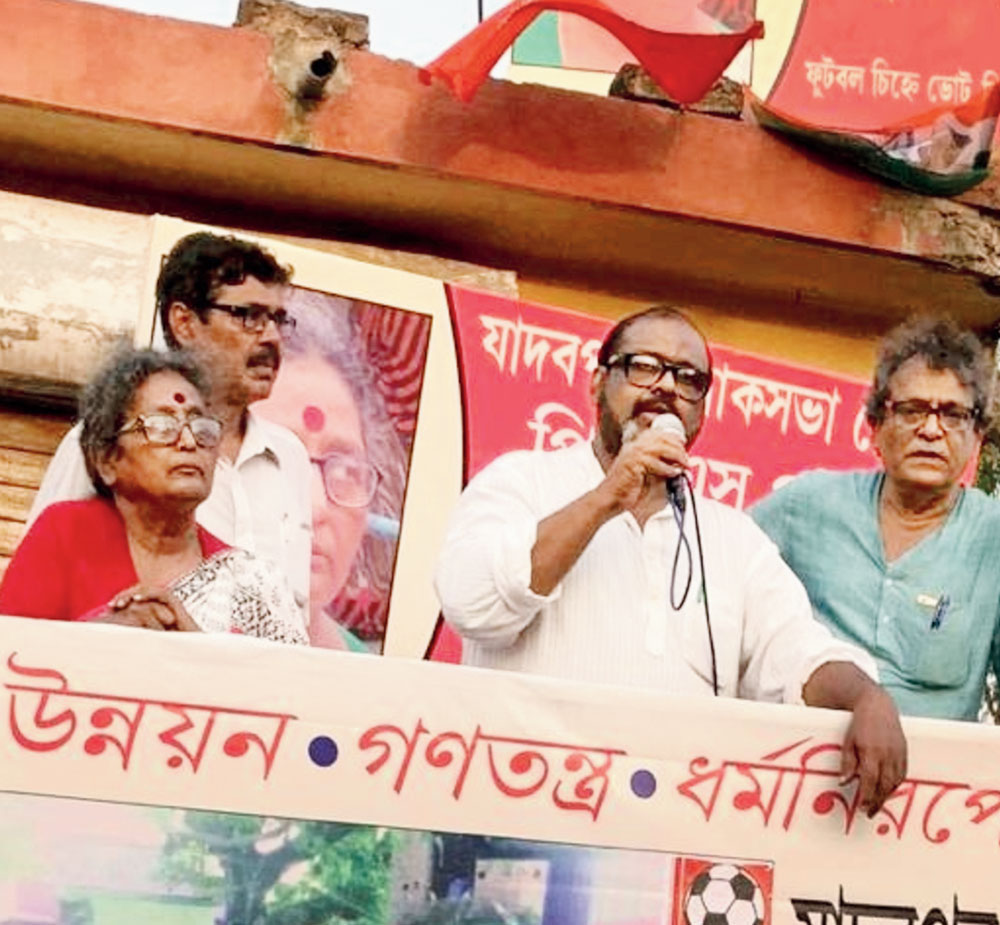 Cheruvathoor Poulose John, the general secretary of the Communist Marxist Party (CMP) in Kerala, believes the CPM in Bengal has lost the plot in going after Mamata Banerjee instead of focusing on the BJP, while it is missing the bus nationally because of the Prakash Karat lobby allegedly holding Sitaram Yechury to ransom.

The 62-year-old communist from Kerala’s Kunnamkulam co-founded the CMP in 1987 when CPM leader M.V. Raghavan was expelled following differences over formation of alliances. John has served two terms on the Kerala State Planning Board.

John, who takes an active interest in Bengal and its Left movement, toured the state between Wednesday and Saturday last week to campaign for the Party of Democratic Socialism (PDS) — the CMP’s ally in the Confederation of Indian Communist and Democratic Socialists, of which he is the general secretary — candidates in Dum Dum, Jadavpur and Calcutta North.

In a conversation with Meghdeep Bhattacharyya of The Telegraph, John said he believes the CPM’s fight against the Trinamul Congress at the grassroots has worked in favour of the BJP, which, he thinks is counterproductive to what the Marxists stand for. Excerpts:

On the CPM in Bengal

CPM leaders at the ground level are equating Trinamul and the BJP as two sides of one coin. The leaders are pitching this idea to cadres and supporters who are going ahead and voting for the BJP to defeat Trinamul. This looks like a suicidal move by the CPM and I think this will be the second historic blunder.

The CPM is confused about what to do. Theoretically, I am asking how can a regional party (Trinamul) be equated with a national fascist party or a right wing party (the BJP), from the communist point of view? What is the communist logic, what is the ideological logic of equating a regional party with the landlord-right wing-monopolist party? Their own ideology does not permit them to say that Trinamul and the BJP are equal or are two sides of the same coin. But this campaign has translated into a kind of subtle alliance between the CPM and the BJP. So, for defeating Trinamul, they are going with the BJP. This is the ground reality that I have been witnessing in Bengal.

(Asked if he was proposing a truck with Mamata instead) That may not be possible right now, practically not possible. But tying up with the Congress was the right way forward. With the others in the Left movement too, like the PDS…. This isolation syndrome that the CPM is suffering from — they seem to want to get isolated and are giving all sorts of reasons for that — is a dangerous sign of extinction.

On the CPM in Kerala

In Kerala, they thought they would benefit from the issue of young women’s entry into Sabarimala. But now they have learnt the hard way that it was another blunder they committed. The BJP utilised that issue — fortunately the UDF was sincere — and the CPM has lost a large number of majority Hindu votes in Kerala.

On the CPM nationally

They have become their own liability. They scuttled the chances of Jyoti Basu becoming Prime Minister. They expelled Somnath Chatterjee and others like (PDS general secretary) Samir Putatunda in Bengal. Now they are scuttling Mamata. Whenever, wherever a Bengali becomes a national figure, the CPM or the communist movement tries to cut that person to size. This maybe a Bengali thing. Right from Netaji Subhas Chandra Bose, the communist movement has been opposing all big Bengalis. It is a big issue. Even during Pranab Mukherjee’s time, they did not support him wholeheartedly.

Prakash Karat has become the official liquidator of the CPM. Do I even have to bring up the 2008 withdrawal of support from UPA I over the India-US nuke deal? Where is that now? What happened to the country because of it? The only things to happen, happened to the CPM. They were finished. Gross exaggeration of these imaginary problems led to their own downfall. You have to tune according to new aspirations of new generations, not remain stuck in the 1960s and 1970s. Learn from China. Even people who are not communists think communists should be strong. But the communists themselves seem bent on committing suicide politically.

On Yechury and Karat

CPM general secretary Sitaram Yechury tried his level best to make the alliance with the Congress, but the Karat group sabotaged it. They feared that if Yechury brings seats from Bengal, and Kerala adds a few more, the CPM will have 15-16 seats and then even Yechury could be a contender for Prime Minister. That they (the Karat-Pinarayi Vijayan lobby) cannot afford.

Nationally, the CPM is missing the bus again, because of the Pinarayi Vijayan-Prakash Karat combine. The general secretary (Yechury) has become a prisoner of war, he is a PoW of Karat and Vijayan and is forced to work as an office secretary, not the general secretary.

They did not support the Congress when they said we shall see to it that Yechury will be in the Rajya Sabha from Bengal for a second term. What is the logic?

Karat has come a de facto BJP agent, for all practical purposes. Yechury is helpless. Yechury is my colleague, all of us were together in the SFI leadership once. My request to Yechury, be the general secretary first, don’t be an office secretary, don’t work like a PoW. The communist movement in India at the national level is going to be wiped out if this doesn’t stop.

On the next government at the Centre

Narendra Modi is not yet out, but very, very down. He is very weak. The Congress is coming up. We hope the Congress can put up a Prime Minister sometime. Because Didi (Mamata) or Mayawati or Naveen Patnaik, nobody like that can function as a Prime Minister while Modi is the Opposition leader.

I was touring south Bengal extensively, especially areas in and around Calcutta, it was a great experience for me in the nooks and corners of Bengal. It is remarkable how we are 3,000km apart, but close neighbours and brothers. At least 10 lakh workers from Bengal have been working in Kerala for years, playing a vital role in building the state…. In remote villages of Bengal, people come and speak to me in fluent Malayalam. It is an amazing bond we have that nobody seems to be talking much about.