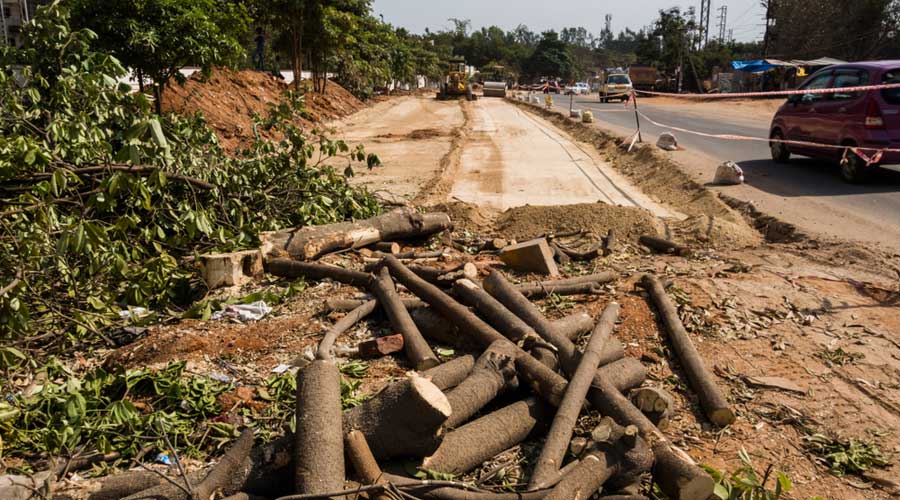 Trees that have been chopped as part of a highway-widening project in Hyderabad.
Shutterstock
Our Special Correspondent   |   New Delhi   |   Published 11.08.20, 02:10 AM

The Congress on Monday joined a chorus of opposition to the Centre’s moves to modify existing rules relating to the environmental impact assessment process that governs development projects, describing the proposed changes as “dangerous” and “disastrous”.

Several environmental groups and over 60 former senior bureaucrats, including IAS officers, had last month called on the Narendra Modi government to revise the proposed EIA 2020 modifications. The critics had said while the government claimed it wanted to expedite and introduce greater transparency in the EIA process, the modifications would lower levels of public scrutiny and safeguards on environmental protection.

The EIA process, introduced through a legislation in 2006, provides for a formal assessment of the likely impacts of development projects on the local environment and takes into account public opinion from the resident communities.

“The EIA 2020 draft placed by the BJP government for public feedback is not only disgraceful, it is dangerous,” Rahul said, pointing out that the proposals will exempt polluting industries such as coal mines as well as highways and railway lines passing through dense forests.

The EIA draft “seeks to silence the voice of communities who will be directly impacted by the environmental degradation”, Rahul said, and referred to a proposal to provide projects post-facto EIA approval as a “terrible idea”.

“I urge every Indian to rise up and protest against it (EIA 2020)…. If EIA 2020 is notified by the government, the long-term consequences of the widespread environmental degradation will be catastrophic for us and future generations of Indians,” Rahul said.

Jairam Ramesh on Monday wrote to Union environment minister Prakash Javadekar, saying the EIA draft was “fundamentally flawed and makes a mockery of the Prime Minister’s many statements on the need to protect India’s environment”.

Javadekar had on August 5 written to Ramesh saying the draft notification had been kept in the public domain for comments and that the suggestions and concerns expressed by Ramesh were “unfounded and based on misinterpretation”.

The environment ministry, which released the draft notification in March this year, has set August 12 as the deadline for receiving suggestions and comments.

“This is only a draft, not the final notification. The draft will be finalised after taking into consideration suggestions and comments received,” Javadekar said on Monday.

Ramesh has pointed out that the proposed reduction of public consultation period from 30 days to 20 days means the public will have less time to engage with the material available on potential impacts of the proposed project, seek advice and decide how best to express opinion and ask questions.

He also pointed out that the draft notification would reduce public access to relevant information as the project proponents would need to provide the EIA report only in English and not in the local or regional languages as hitherto required.

In a separate message to the Congress party’s research department, Ramesh said the proposed changes would reduce the role of public hearings.

“Good, bad or imperfect, public hearings are an essential aspect of environmental impact assessment,” Ramesh said in an online video message. “Now that role has been curtailed dramatically.”

Ramesh said the changes would also open a window for ex-post facto approval, which means project proponents could start a project and then receive environmental clearance. “It really makes a mockery of the environment impact assessment process,” he said.

He also said many projects would be exempt from the EIA, adding that this is another source of grave concern.

A group of 63 former bureaucrats had last month written to Modi, saying the proposed EIA 2020 would deliver a “most serious and long-lasting blow to the environment”.