Eighth round of talks between farmers and Centre underway

‘If no solution arrived in today’s meeting, we will take out tractor rallies on January 26’ 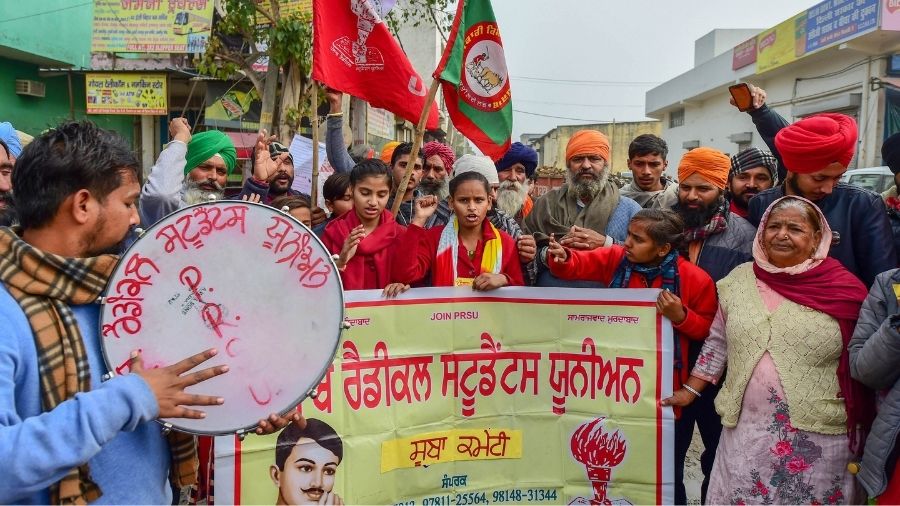 Representatives of protesting farmers’ unions and three central ministers have begun their eighth round of negotiations on Friday afternoon to solve the impasse over three agri-marketing laws in New Delhi.

Union Agriculture Minister Narendra Singh Tomar, Railways, Commerce and Food Minister Piyush Goyal and Minister of State for Commerce Som Parkash, who is an MP from Punjab, are holding the talks with the representatives of around 40 farmer unions, who have been protesting for over a month now, at the Vigyan Bhawan.

On January 4, the seventh round of talks ended inconclusively as the unions stuck to their demand for a complete repeal of three farm laws, while the government wanted to discuss only the “problematic” clauses or other alternatives to end the deadlock.

Before that, in the sixth round of talks held on December 30 last year, some common ground was reached on two demands -- decriminalisation of stubble-burning and continuation of power subsidies.

Tomar met senior BJP leader and Home Minister Amit Shah, just before the start of the eighth round of talks with protesting farmer unions on the three farm laws, sources said.

The meeting continued for about an hour, they said, but what issues came up for discussion in the meeting could not be ascertained.

Earlier during the day, Union Minister of State for Agriculture Kailash Choudhury expressed hopes that a resolution will be reached after Friday’s meeting.

“I am hopeful that a resolution will be reached at Friday's meeting. We could have ended the deadlock by now had the protesting farmer unions discussed the issues raised at the first meeting,” he told PTI.

Choudhury said during the first round of talks, there was no demand for repeal of the three laws.

Just before the meeting, All India Kisan Sangharsh Coordination Committee (AIKSCC) member Kavitha Kuruganti said: “If no solution arrived in today's meeting, we will continue with our plan of tractor rally on January 26.”

“Our main demand is repeal of the laws. We will not accept any amendments. Government is taking it as a prestige issue and not taking back the laws. But this is a life and death question for all farmers. There has been no change in our stand since beginning,” she added.

The agitating farmers took out tractor rallies on Thursday to press their demand for a rollback of the laws, while the Centre asserted that it was ready to consider any proposal other than a repeal of the legislations.

Owing to the farmers’ protest since late November last year, several routes connecting Delhi with its neighbouring states have been closed for traffic movement.