‘No salary for 4 months, what respect do we have?’ 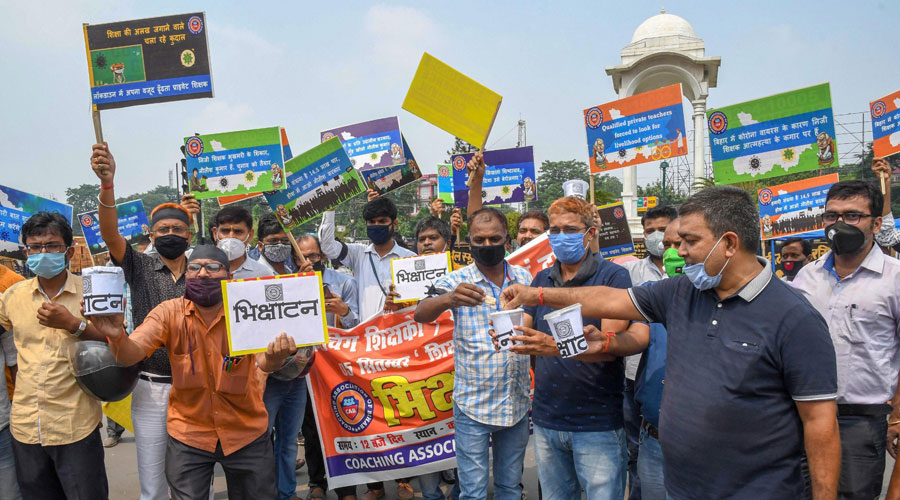 Coaching teachers and owners during a protest, demanding to reopen the educational institutes on Teachers day in Patna on Saturday.
PTI
Basant Kumar Mohanty   |   New Delhi   |   Published 06.09.20, 03:18 AM

Shalu Mahajan, an assistant professor of Acharya Narendra Dev College, began Teachers’ Day with a protest at the institution and later joined a dharna at Delhi University before being detained by police.

“Today we have no basic human rights. Our right to survival has been denied. When we have not got salary for the past four months, what respect do we have in society?” she said.

The Delhi University Teachers’ Association (DUTA) on Saturday observed “Black Teachers’ Day” to protest the delay in grants to 12 DU colleges fully funded by the state government, which has held up the payment of salaries to over 1,000 teachers and more than 500 non-teaching staff since April-May. Their plight has been aggravated by the pandemic and its crippling economic fallout.

The AAP dispensation and the university are locked in a tussle over the formation of governing bodies at 28 colleges, including the 12 institutions. All important decisions are ratified by the governing bodies, in the absence of which the college principals are running the show.

The state government has also begun an audit of the accounts of these colleges following allegations of financial irregularities, intensifying the standoff.

“I pay EMI on a home loan and also have to pay school fees every month. We are managing with huge difficulty. We are being penalised for no fault of ours,” said Mahajan, whose husband teaches at the same college.

On Saturday, the teachers held a protest at the DU arts faculty. Over 100 teachers were detained and taken to Maurice Nagar police station. The police said the teachers did not have permission to protest. They were later released.

The DUTA has threatened a boycott of classes if the salaries are not released soon.“Whatever may be the issue of the university or the managements of the colleges, the teachers’ salaries should not be stopped. The teachers are feeling discouraged to carry out their work. If the stalemate continues, the teachers will be forced to boycott classes,” said DUTA president Rajib Ray.

DU executive council member Rajesh Jha said it was ironic that the central and state governments were conducting programmes on Teachers’ Day but were not allowing teachers to protest against non-payment of salary. Retired DU teachers, who have not been receiving the revised pension although it was cleared two years ago, joined Saturday’s protest.

“The government has notified (the increased pension). But the university is not processing our cases. Many retired teachers will die without getting what they deserve,” a retired teacher said.

Also, more than 500 teachers have not been able to migrate from Contributory Provident Fund (CPF) to General Provident Fund (GPF) despite Delhi High Court ruling in their favour in 2016. GPF is free from market considerations, hence the amount received by an employee is more.

These teachers had not been able to migrate when the facility was made available intermittently from 1987. DU has challenged the high court’s decision before a bigger bench.

An email and a text message to DU vice-chancellor Yogesh Tyagi for comment on the non-payment of salaries did not elicit a response. An email to Delhi education secretary H. Rajesh Prasad asking about the delay in releasing government grants also went unanswered. Delhi education minister Manish Sisodia did not respond to a text message.