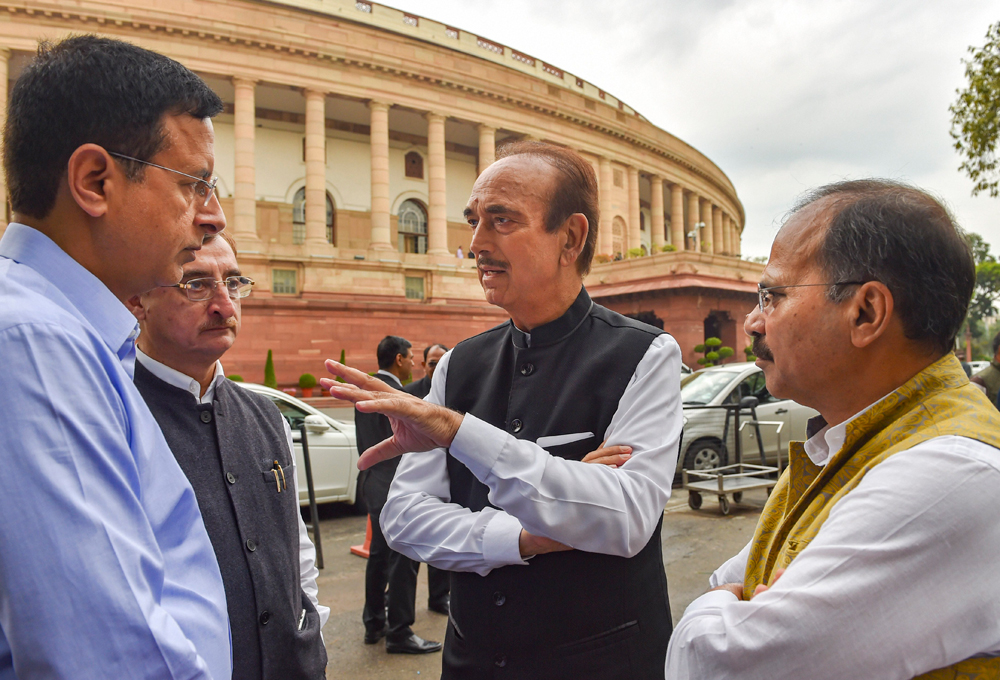 The Congress on Thursday appealed to the nation to “rise against” the manipulation of election mandates through coercion and money, a day after claiming to have foiled an alleged BJP plot to topple its government in Madhya Pradesh through defections.

“This practice started with the BJP coming to power at the Centre in 2014. Misusing investigative and tax agencies to create fear and blackmail MLAs, using money power to induce defections — this distortion of democracy will have serious implications for the country,” senior leader Ghulam Nabi Azad said.

“In Arunachal Pradesh, the Congress had a huge three-fourths majority but the government changed. The same thing happened in several other states. We appeal to the country to rise against this kind of misuse of power.”

The Congress and the Janata Dal Secular lost their coalition government in Karnataka last July following defections by 17 MLAs, most of whom are now ministers in the new BJP government.

In Madhya Pradesh, the Congress has 114 MLAs in a House of 230 (currently 228), and has the support of the two BSP members, one Samajwadi Party member and four Independents. The BJP has 107 seats.

Sources said that of the 12 MLAs targeted, 8 belonged to the Congress, three were Independents and the remaining MLA was the BSP’s Rambai.

Three Congress MLAs and one Independent, whom the BJP has supposedly sequestered at a Karnataka resort, are yet to return but Congress insiders insisted that the topple operation had been defeated. Later in the day, one of the missing MLAs, Hardeep Singh Dang, resigned his Assembly seat in a blow to the Congress.

BSP members Rambai and Sanjeev Singh and Samajwadi MLA Rakesh Shukla on Thursday denied any horse-trading or abduction by the BJP. They told the media in Bhopal that they were not up for sale and that the defection charge had hurt their image.

But the Congress painted a different picture, arguing that only a timely intervention had thwarted the alleged BJP plot.

“They had worked out an elaborate plan to pull down the government. This is not the first time they have done it,” Congress senior Digvijaya Singh told The Telegraph.

“But now they are desperate because the police are investigating the e-tendering scam, which will expose many BJP leaders.”

Digvijaya dismissed the contention that the Congress’s “internal squabbles” had triggered the crisis, arguing there was enough evidence of the direct involvement of BJP leaders.

“Did the BJP ever admit it had launched an operation in Karnataka to topple the Congress-JDS government? The MLAs are threatened, given allurements and flown out in chartered planes. Then the blame is laid on our ‘internal contradictions’,” Digvijaya said.

“Modi-Shah are not bothered where the economy, employment and value of rupee are plummeting,” Digvijaya tweeted.

“They are busy spending crores of black money to destabilise duly-elected Congress governments and destroying the social fabric of India. Utterly shameful.”

A message on the Congress’s official website said: “An appeal to all — Please don’t describe horse-trading as masterstroke, don’t call a power-broker Chanakya and don’t glorify murder of democracy as change of regime.”

The party held an early morning news conference to assert that efforts were being made to destabilise an elected government.

Senior Madhya Pradesh Congress leader Vivek Tankha said: “It’s only because of our alertness that we could bust this plot. They sent central agencies to Chhattisgarh also to create trouble there but failed.”

Congress communications chief Randeep Surjewala said: “The conspiracy to buy MLAs using crores of rupees has the support of the local mafia. The Kamal Nath government smashed mafia operations in 11 sectors — from mining to chit funds, from cooperatives to extortion.”