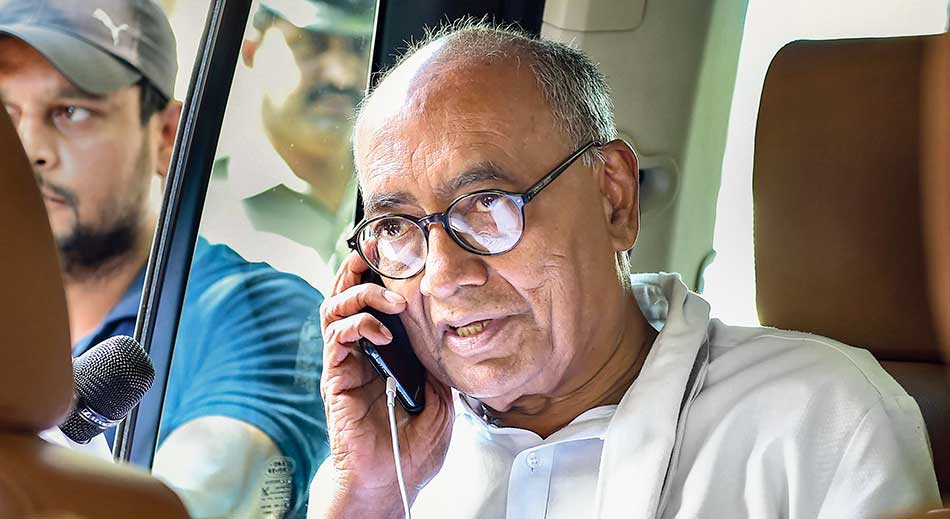 Senior Madhya Pradesh Congress leader Digvijaya Singh on Wednesday petitioned Karnataka High Court seeking a directive to Karnataka’s BJP government and police to let him meet the Congress rebels sequestered in a Bangalore resort for over a week.

Digvijaya, prevented from meeting the dissident MLAs in the morning, argued he had a fundamental right to enter the resort and meet his party colleagues from Madhya Pradesh ahead of the March 26 Rajya Sabha elections, where he is a candidate.

The petition has been admitted but it is unclear when it might be taken up. Digvijaya told a media briefing that he would not leave Bangalore till the petition had been heard.

The former chief minister had arrived in Bangalore around 6am and headed straight to the resort, located near the airport, where 22 Congress politicians loyal to Jyotiraditya Scindia are holed up. Scindia has joined the BJP.

A large posse of policemen, who had put up a barricade about 1km from the resort, stopped Digvijaya and the senior Karnataka Congress leaders accompanying him.

“I’m contesting for the Rajya Sabha and it’s my right to meet the 22 MLAs, who are the voters,” Digvijaya told reporters at the site.

The Madhya Pradesh Speaker has already accepted the resignations of six of the rebels, so technically there are only 16 MLAs at the resort. The rebels had been flown in from Madhya Pradesh in batches since early March.

Digvijaya, unwilling to return without meeting the MLAs, squatted on the road along with his party colleagues from Karnataka, who included the new state president D.K. Shivakumar and three lawmakers, and about 500 party workers.

Digvijaya accused the BJP of holding the MLAs captive and said he merely wanted a chance to meet them alone as a Rajya Sabha candidate.

“I am former chief minister of Madhya Pradesh Digvijaya Singh, who is a Rajya Sabha candidate. Voting is on the 26th and my 22 MLAs are locked up here. Their phones have been snatched away. The police are not allowing me to talk to them,” he told reporters.

Deputy commissioner of police Bheemashankar S. Guled, who headed the police contingent at the barricade, apparently told Digvijaya that one of the MLAs themselves had asked that he not be allowed to meet them.

“Mr Bheemashankarji is saying he (has been) told by some person, who claims to be an MLA, whose name he doesn’t know, that he doesn’t want to meet me. How do I know he has spoken to an MLA?” Digvijaya asked.

“They say there is a security threat. I said I’m a Gandhian and I don’t have a bomb or a weapon — a pistol or a rifle.”

The police detained Digvijaya and the other Congress politicians after about 30 minutes of arguments. They were taken to the local police station and released without charges. Digvijaya later met police commissioner Bhaskar Rao in the city.

He then met leader of the Opposition P.C. Siddaramaiah and other Karnataka Congress leaders at the party office, and attended a media briefing.

Sometime in the morning, Digvijaya’s lawyers moved the petition in the high court.

Digvijaya alleged that money was being offered to Congress MLAs in Madhya Pradesh. “They are offering money to everyone. Even our Congress MLAs who are out (loyalists) are being offered money. They say, ‘Take 20 crore, 30 crore, come with us’,” he said.

“They (the BJP) brought them (the 22 rebels) here on a chartered flight. The BJP paid for the flight and their MLAs came with them (Congress lawmakers).”

On March 12, the police had prevented Madhya Pradesh minister Jitu Patwari and Congress MLA Lakhan Singh from meeting the rebels.