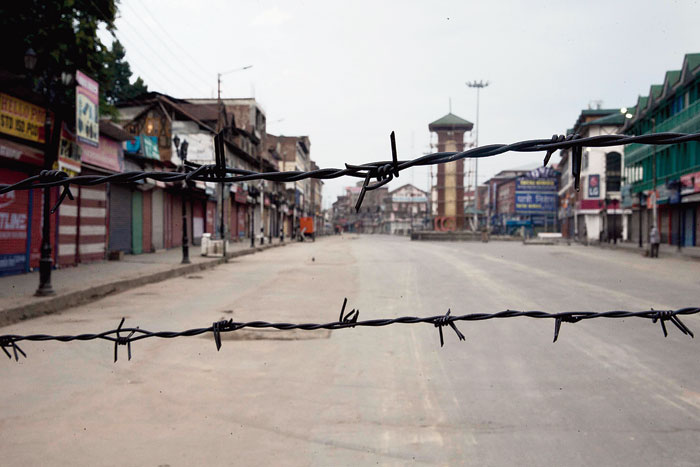 I may have never ever felt so shut out and so shut down. Not during the protracted military operations of the IPKF in northern Sri Lanka. Not during the many weeks I was on the frontier reporting the Kargil war. Not during the Tahrir Square uprising in Cairo. Not even during the darkest I have witnessed in Kashmir over the past decades.... This was not even censorship, not about what you can or cannot report. This was being cut out and left cold'

A reporter’s worst nightmare is not being able to tell the story; this week, the powers enacted it coldly, and with singular completeness. But it’s poor form to complain of being pinched when everything around you is being hammered. The reporter in Kashmir this week was a niggling collateral to seismic enactments whose impulsive after-tremors have been stilled by jackboots and commanded at gunpoint to behave.

These are fragments from a diary that lay proscribed for days:

Shortly after I arrive in Srinagar mid-afternoon, a friend of several decades comes around and insists on ferrying me home. “No point getting locked up in a room with nowhere to go. It isn’t safe, a big lockdown is coming.”

“How do you know a lockdown is coming?” I ask him, a little irritably.

“If a lockdown isn’t coming, why are you even here?” he retorts.

We visit a retired bureaucrat whose sense and instinct I have long trusted. He isn’t himself; he is unshaven and has a bedraggled look about him. “What news have you got from Delhi?” he asks me. “You tell me, I’ve merely arrived sensing something, nothing more,” I reply.

He throws up his hands. “I’ve been burning the phones, but is there anyone here I know who knows? Nobody. Something is happening but what? I am at wits’ end.”

We drive around Srinagar, through the arterial Maulana Azad Road, and dip into the warren of the downtown and weave about — Khanyar, Nowhatta, Zainakadal, Alikadal, Amirakadal, Idgah, Soura, singed flashpoints that haven’t ceased from erupting.

There’s a hint of panic in the traffic and all the honking that suggests more than just weary weekend rush. Folks are queued up at ATMs. Long, gnarled lines of cars at petrol bunks. Boys waving bottlefuls of diesel or petrol like trophies. Jostling around chemists’ counters.

“Can you not see everyone’s panicked?” my friend fumes. “What are they up to? Are they telling us all this is for nothing? That they have abrogated the Amarnath Yatra and whistled away the tourists for nothing?”

He’s on edge, he is breathlessly running through the gamut of possibilities. “What plans do they have for us? Take away 35A? Trifurcate us? Kill 370? Do you think they can do that? Is that even possible? But they can do anything, can’t they?”

It’s dark by the time we reach. The outskirts of Srinagar have turned, the air is less hurried. Governor Satya Pal Malik is exhorting calm on television. “Nothing is happening. Why is everybody panicking? There is no reason to. I know of nothing happening, but I don’t know about tomorrow.”

It rains for a bit — black, dark rain — and it puts a shine on the road. Presently a convoy carrying troops passes by, sweeping up the shine, the tyres mulching in the rain. Nothing else moves, or can be heard. Not even birds. Just the convoys, and later into the night, the report of boots getting deployed.

I drive into Srinagar. It’s a washed, sunny morning. The traffic’s thin; it’s a Sunday. But no, it’s not thin. On the edges of Srinagar, barricades have come up overnight. And many more platoons are moving up and down, taking position. The troops are calm at the back of the trucks; some of them look tired and lost, as if they don’t yet know where they’ve been ordered to. Boys are at cricket in neighbourhood fields.

The regulation Sunday street bazaar has unfurled on Residency Road; it’s churning with hawkers and buyers, multicoloured candyfloss is flying off the carts like there won’t be a tomorrow. I see people buying cigarettes in stacks; the bakery shelves are thinning by the minute, its loaves of bread are vanishing the fastest.

I spot an elderly woman screaming down her boy for spilling a bagful of cookies on the pavement: “Now don’t ask me for biscuits a whole month, you deserve that, you clumsy!”

Central Srinagar is a whirl all its own. Did anyone even pay any heed to Malik’s plea for calm? Or do these folks know better?

“It’s practice, Sir,” a restaurateur known to me for years tells me. “Kashmiris have a keen sense of foreboding, they’ve been trained by you for years and years. If there’s panic, there must be a reason.”

I try knocking a few important doors on Srinagar’s most important street. But I run into a barricade at Gupkar Road. It’s where Farooq and Omar Abdullah live; it’s where Mehbooba Mufti is too.

I take a detour to more approachable doors — homes of civil servants and the odd police officer I’ve known, senior journalists in town. For every question I ask, I get a question in return: “But why don’t you tell us what’s happening? You’re the one from Delhi.”

Something’s about to happen; nobody has a farthing’s clue what.

I get called by a friend on my way back. “Two truckfuls of troops just took over a polytechnic in front of our house. They were in riot gear, helmets, rubber knee-caps, helmets, guns. There are many of them, two truckfuls in just our narrow lane.”

I call my Srinagar-based colleague Muzaffar Raina to find out if he’s well and any wiser. “I don’t know, I don’t know, people are saying many things, all sorts of things, but something may happen tonight, hai na?”

We exchange “take care and keep in touch” advisories. That is the last I have spoken to Muzaffar since.

By the time I get home, another friend has called me from Srinagar and informed me she is on her way to secure a curfew pass. “When are they imposing curfew?” I ask her. “Tomorrow morning, I am told; speak to you later.”

“Are you certain?” I text her.

“So I was told,” she replies, “But very frightened and uneasy. Take care, speak soon.”

An hour later, as I mull the weariness of heaping my newspaper with another “nobody knows, everything’s uncertain” report, I receive a missive from a friend in the police control room.

“The phones are going off in a while, everything.”

“Meaning everything’s off, and no movement tomorrow. See you on the other side.”

My friend who’d gone seeking a curfew pass has been walked up the path.

I make several calls to people in Srinagar who may know, but nobody responds. My friend and host tells me sagely: “Relax, they are busy. Everything is shutting down, get used to the idea.”

At 10.54, the Internet on my friend’s phone snaps. He has a local number; mine, a Delhi number, is still working.

I send a text to my editor, R. Rajagopal: “They have begun snapping Internet services incrementally.”

At 11.04, I send him another text: “It can safely be added that the administration is bracing for imposing ‘restrictions’ on movement tomorrow in the Valley.”

At 12.26, I begin writing another text to Rajagopal: “Don’t know what the cabinet will decide in Delhi tomorrow, but the iron curtain is about to….”

Like at the throw of some switch somewhere. Internet gone. WhatsApp gone. Connectivity gone. The signal towers have collapsed.

I run down to the landline. “This line is currently out of service, please try later.”

I will only ever be able to try whenever it is I am in Srinagar next.

I try heading out, but there’s nowhere to go. There are pickets and barricades, and soldiers frilled out around spools of concertina wires. Lockdown.

I may have never ever felt so shut out and so shut down. Not during the protracted military operations of the IPKF in northern Sri Lanka. Not during the many weeks I was on the frontier reporting the Kargil war. Not during the Tahrir Square uprising in Cairo. Not even during the darkest I have witnessed in Kashmir over the past decades.

All through the widespread eruption of armed militancy and the consequent flight of Pandits from the Valley in 1989-90, there was always the old reliable Post and Telegraph Office to carry your typewritten copy to for transmission.

This was not even censorship, not about what you can or cannot report. This was being cut out and left cold.

Touch phones don’t come alive from rubbing them; only their screens do. I rub my phone nevertheless. I switch it off and restart it. Meantime, I coo into the landline’s receiver like I could seduce it to come back to life. I rub my phone again. But for all the magic these instruments possess, they are no Aladdin’s lamp; and the djinn was never at my command.

But bless the skies and satellites. The television was working — not cable networks, but we were blessed, we had a dish overhead.

A bombshell came down it a little past 11 in the morning.

Home minister Amit Shah had announced to the world a bouquet of decisions that would be received in Kashmir, the core intended area, as a bunch of nettles: the spirit of Article 370 lay snuffed, Article 35A had been killed as consequence, Jammu and Kashmir itself had been both bifurcated and downgraded to a Union Territory.

Jubilation and uproar flickering off the live screen from the Rajya Sabha. Astonished silence where I sat with others gathered around, as if everything had turned to wood.

“Haaaaah, that is it then, wham-bam thank you Sam,” one of them recovered to remark. “Oh, so Kashmiris had set out to demand azadi, and now they are being asked to demand statehood. That’s how far we have come. Bravo! Bravo!”

You had to hear that tone to sense the depth and pathos of the sarcasm.