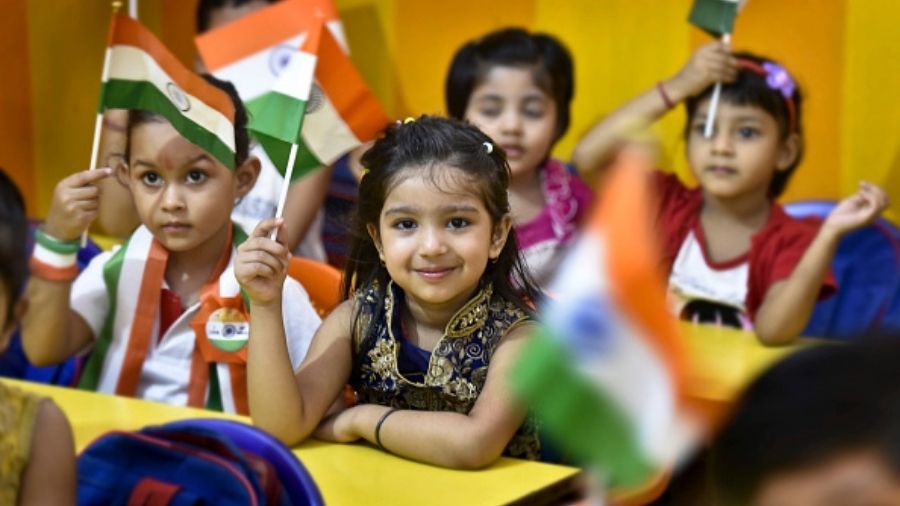 Starting the class with five minutes of "deshbahkti dhyan", maintaining "deshbhakti diary", Flag Day activity and exploring why "India is glorious but still not developed", are among the main features of Delhi government's ambitious patriotism curriculum which will be rolled out in its schools.

The curriculum for classes nursery to 12, which was launched at a mega event at Chattrasal stadium on Tuesday, will not have any textbooks.

According to officials, the 40-minute classes will be conducted every day for classes six to eight and twice a week for classes nine to 12.

"Each class will begin with a five-minute activity called deshbhakti dhyan. During the mediation, students will chant the lines 'I bow before my country and I respect Bharat Mata' through their minds," explained an official of the Directorate of Education (DoE).

"The children will then be asked to take a vow to honour their country and preserve its respect. In the end, the students will be asked to think of five people who they consider patriots and thank them in their minds," the official said.

The students will be asked to maintain a new notebook or diary as "deshbhakti diary" which will be a reflective journal to document learnings, thoughts and feelings along the journey of the Deshbhakti Curriculum and will have notes related to the homework.

The topics include taking responsibility towards the country and its progress, constructive criticism, respect for and harmonious coexistence with others, critically thinking about issues confronting the country, comprehensive conception of patriotism, linking patriotism to the lived realities and everyday actions of students and working for the country's development with pride and honesty.

Some of the chapters are: 'My India is glorious but why not developed', 'Deshbhakti: My country my pride', 'Who is a Deshbhakt' and 'India of my dreams'.

"Facilitator's handbooks have been designed for three cohorts -- nursery to class five; classes six to eight and classes nine to 12 -- and these will be used to inculcate patriotism among the students through simple activities," the DoE official added.

The facilitator's handbooks for two cohorts -- classes six to eight and nine to 12 -- and 100 stories of freedom fighters and patriots were also unveiled at the launch event by Chief Minister Arvind Kejriwal.

Describing the homework activities students will be asked to do, the DoE official said, "Students will ask the key question of the chapter to three people older that them- one from their family and two outside of their family. The activity is intended to help children to seek views and opinions of people around them -- adults and acquaintances."

"It will encourage them to listen to different views and thoughts of the people around them about the country, enhance the expanse of discussion and broaden student perspective," the official added.

The students will also participate in Flag Day activity as part of the curriculum.

"The activity is aimed to establish a connect between students' behaviours and the country. The idea is to make students realise that every act of theirs makes the country's flag happy or sad. Each student will make his or her own flag at the start of the curriculum," the official said.

The teachers' handbooks come with a set of "dos and don'ts" for conducting these classes they have been instructed not to criticise children's answers to which they do not agree and not to present their personal thoughts or opinions as the correct answer; not to stop children from asking questions or cut them off and to listen to them with patience; not to stop discussions on sensitive topics or present their own views and let children form their own thoughts through the discussion.

The chief minister had announced the plan for Deshbhakti Curriculum on the 73rd Independence Day celebrations in 2019. The curriculum has been prepared by Delhi government school teachers, with inputs from NGO partners and experts.

Sisodia said at the launch event on Tuesday that since this is the first year (of the curriculum) and "we are celebrating the 75th anniversary of Independence, we are including 100 patriots".

"Next year onwards, we will include 100 more and then another hundred after that. This would go on and on. Right from nursery to class 12, a child will be able to witness at least 700-800 stories and 500-600 patriotic songs and poems," he had said.