Delhi recorded its worst air quality of the year on Thursday morning, falling in the severe-plus emergency category 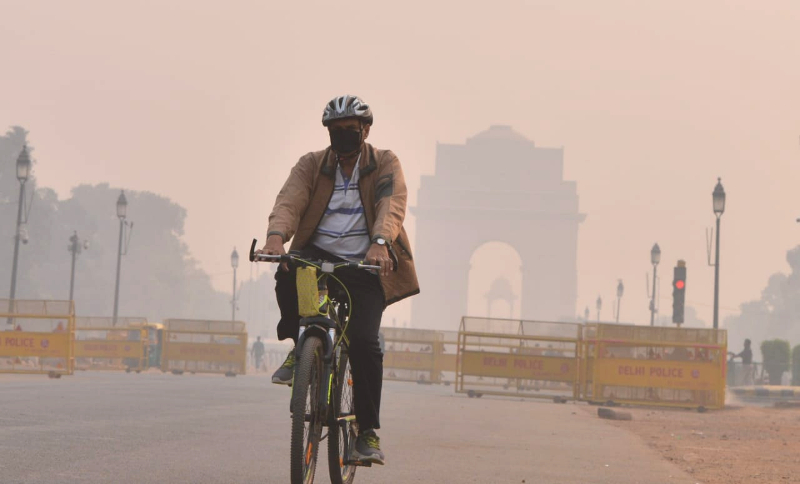 A day after Diwali, there were searching questions and some anguish too as a hazy morning dawned over the Delhi-NCR region, with many residents voicing their helplessness at the violation of the Supreme Court's 8-10 pm deadline of bursting firecrackers.

Delhi recorded its worst air quality of the year on Thursday morning, with the air quality index jumping to 574 that falls in the severe-plus emergency category, meaning that even healthy people may suffer from respiratory illnesses on a prolonged exposure to such air.

”Delhi is a gas chamber for TB patients like me. We are caught in a bind. If we escape TB, then we will die of pollution,” Hasmukh Rai, a senior citizen of Mayur Vihar.

“In this season, when everybody is talking of bringing ordinances on variety of issues, why can't politicians join hands and bring ordinance to ban stubble burning?” he asked.

South Delhi resident Sagarika Sharma said she had lost her mother to lung cancer last year due to this hazardous pollution. “My mother was not a smoker or drinker, but yes, she was guilty of living in Delhi.”

Sharma wonders how people cannot understand the repercussions of bursting crackers. “I understand they want to celebrate, but at the cost of digging ones own grave!”

Even as the police launched a crackdown the violators and made multiple arrests, several people said, for them, Diwali meant bursting firecrackers.

“Since childhood, we have been bursting crackers on Diwali. We do not understand green or red crackers. What we know is that it is a symbol of the festival for us and we will continue doing it,” said Himanshu Bhalla, a Gurgaon resident.

Another resident of Lajpat Nagar, who did not wish to be identified, said the order of the top court came out too late and and she cannot forgo the celebration of the festival over it.

Environmental activists said the police needed to be supported by governments to strictly enforce the ban.

Environmental lawyer Ritwick Dutta said the violation of the deadline was not unexpected as one cannot expect an overnight change in people's behaviour because of a court order. Doctors also warned of the ill-effects that the severe air pollution could have on the health of people.
Prem Singh

“The judiciary has given our executive the necessary tools. We request our lawmakers to support our executive and all three arms of our democracy to work together to protect citizens health at this time of national health emergency,” said Jyoti Pande Lavakare, co-founder, Care for Air NGO.

“We would like our leadership and our prime minister to acknowledge this health emergency and encourage implementation of solutions,” she added.

Ravina Kohli, member of #MyRightToBreathe campaign, said people were in denial of the health impact of burning firecrackers of their health. “The police could have been helped by the politicians and local authorities for strictly enforcing the order.”

Reecha Upadhyay, another environmental activist with the Help Delhi Breathe campaign, called for awareness at the ground level over the health hazard caused by firecrackers.

Environmental lawyer Ritwick Dutta said the violation of the deadline was not unexpected as one cannot expect an overnight change in people's behaviour because of a court order.

Doctors also warned of the ill-effects that the severe air pollution could have on the health of people.

“Before Diwali, we have witnessed a rise of 25 per cent in chronic obstructive pulmonary disease exacerbation and asthma patients, many being new patients, said Arunesh Kumar, senior consultant, pulmonology, of a Gugaon hospital.

“It is highly advisable that people should stay indoors, use N-99 masks while venturing out, avoid early-morning and late-evening outdoor activities, prevent children and elderly from going out, follow good hygiene and cleanliness practices, and keep oneself well-hydrated,” Kumar added.