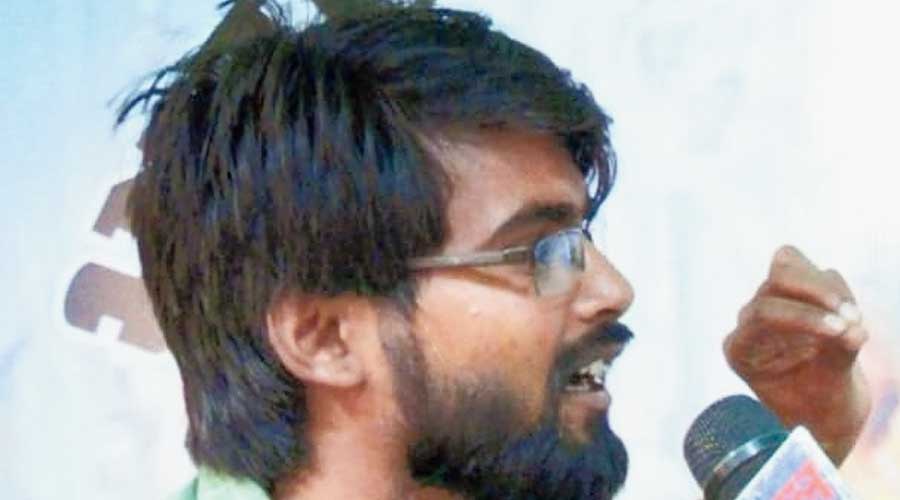 Anmol Pritam, the National Dastak reporter who was roughed up and told to chant “Jai Shri Ram”, which he refused to do under duress
Telegraph picture
Pheroze L. Vincent   |   New Delhi   |   Published 10.08.21, 01:24 AM

Many civil society members have condemned the sloganeering for the killing of Muslims that was heard in Delhi on Sunday.

Many also came out in support of a YouTube channel reporter who had published videos of the Jantar Mantar crowd trying unsuccessfully to compel him to chant “Jai Shri Ram” after he questioned the sloganeers.

On Sunday, a gathering at Jantar Mantar ostensibly protesting against colonial laws shouted slogans calling for violence against Muslims.

“It is extremely distressing that despite heavy police presence, no steps were taken by the police to immediately stop such sloganeering, nor were any coercive steps taken after the slogans were made. It is clear the programme was organised to spread hate against Muslims and incite violence against them,” the complaint said.

An FIR has been registered under Indian Penal Code sections 153A (promoting enmity between different groups) and 188 (disobeying public servant’s order). The complainants have demanded that the men seen in the video and the organisers be also booked under Section 295A (outraging religious sentiments).

The National Commission for Minorities has sought information on the action taken, permissions for such events, and steps to prevent them in future. It has summoned the deputy commissioner of police (New Delhi) on Tuesday.

Besides condemning the police, several people tweeted with the hashtag #ISupportAnmol in solidarity with YouTube channel National Dastak’s reporter Anmol Pritam, who was surrounded by the crowd after Sunday’s Jantar Mantar event.

Pritam told The Telegraph he had questioned members of the crowd about their motives.

“I tried to strike up a conversation with them as the slogans they were raising clearly had nothing to do with colonial laws but were targeted at a particular community,” he said.

“When I asked them why issues like unemployment or food security do not elicit such public protests from them, they were triggered. One youth started yelling that I was from a jihadi channel that hates (Prime Minister Narendra) Modi and (Uttar Pradesh chief minister) Yogi (Adityanath).”

Pritam added: “It was scary as I was suddenly gheraoed by about 150 people. One large man put his arm around me and said, ‘Tere muh mein dahi jam gayi hai ki ‘Jai Shri Ram’ nahi bolega (Has curd set in your mouth that you won’t say ‘Jai Shri Ram’)?”

Pritam is seen a video he has tweeted saying: “I will say ‘Jai Shri Ram’ when I like. I won’t be forced to say it. If so many of you gherao me, I won’t say it.”

He told this newspaper: “At that moment, I felt like just saying it and escaping. But I also felt that physical injuries will heal but the wound to my principles and soul won’t; so somehow I just stood my ground. Soon, they pushed me out. Luckily I don’t have any injuries that require medical treatment.”

Lyricist Hussain Haidry tweeted on Sunday: “Arvind Kejriwal must speak and take action against the brazen displays of hate speech against Muslims in Delhi today.”

Delhi Congress chief Anil Chaudhary tweeted: “Under the leadership of Aam Aadmi Party’s founder member and BJP leader Ashwini Upadhyay, there is a conspiracy by the rioters to throw the capital Delhi into riots again. Why is Delhi chief minister who ordered FIR in Markaz’s case @ArvindKejriwal silent?”

Chaudhary was referring to how pilgrims from a Tablighi Jamaat congregation in March last year were booked for allegedly spreading Covid. They were later acquitted.

However, Kejriwal, who is usually vocal against the police, was silent on Monday — as he has been on communal issues since last year’s riots in Delhi that claimed 53 lives.

Ashwani likely to be questioned