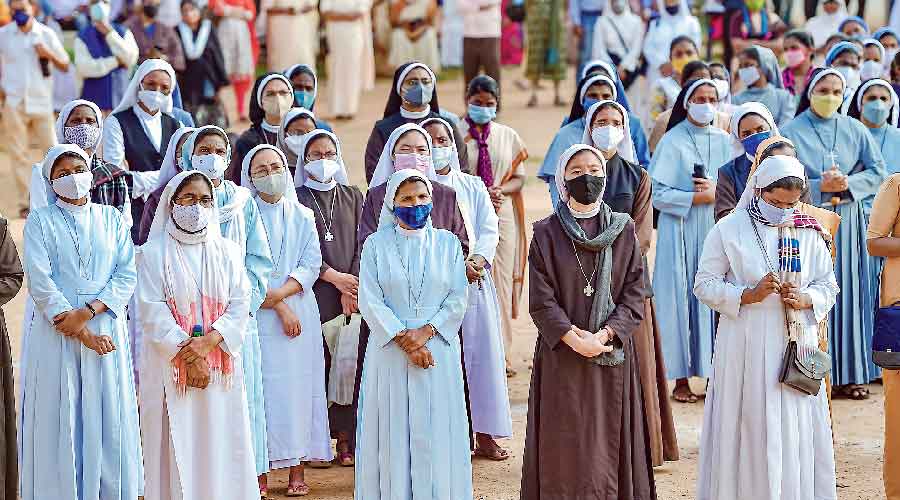 A silent protest at the St Francis Xavier Cathedral grounds in Bangalore on Saturday against the anti-conversion bill proposed to be brought in the winter session of the Karnataka Assembly.
PTI Photo
Pheroze L. Vincent   |   New Delhi   |   Published 05.12.21, 02:46 AM

The JNU students’ union on Saturday defied the registrar’s warning and began screening on the campus Ram ke Naam, a national award-winning documentary on the campaign that led to the Babri Masjid demolition.

No incidents had been reported about an hour into the late-night screening of the Anand Patwardhan film at the office of the Left-led students’ union, which the varsity administration does not formally recognise since its term has expired.

In a circular earlier in the day, registrar Ravikesh had said, “No prior permission for this event has been taken from the JNU administration. This is to emphasise that such an unauthorised activity may disturb communal harmony and peaceful environment of the university campus.”

Ravikesh had added, “The concerned students/ individuals are firmly advised to cancel the proposed programme immediately failing which a strict disciplinary action as per the university rules may be initiated against those responsible for this event.”

The established practice is that the JNU students’ union (JNUSU) does not need permission for events organised at its office. However, elections have not been held to the union because of the pandemic and the current union’s term ended last year.

Students’ union president Aishe Ghosh had said sometime before the screening: “Ram ke Naam shows the truth, what the BJP is doing in this country, and how communal hatred is spread in this secular country by the Right-wing fundamentalists. Secondly, the JNUSU office belongs to the JNU students’ community and not the administration. So why should we seek permission from them? The JNUSU will not back out at any cost.”

A source said the police had contacted student leaders to ask about the screening, only to be asked to “provide protection if they anticipate any disruption”.

Calls and WhatsApp messages from this newspaper to Ravikesh seeking clarifications on his action brought no response.

Deputy commissioner of police (South West) Gaurav Sharma replied, “Nothing reported” on WhatsApp to the questions whether the police had received a complaint against the screening, why they had contacted student leaders and what they proposed to do."

Patwardhan sent a message of solidarity to the students. He told this newspaper, “(The) film has a U certificate from the CBFC (Central Board of Film Certification). (It) can be shown anywhere. It won a national award in 1992 for Best Investigative Film…."

“We all have a constitutional right to screen it anywhere and everywhere. Let us move forward and remove all obstacles that prevent us from obeying the spirit and letter of the Constitution.”

The film has routinely been screened at JNU without incident, and was last exhibited publicly at the same venue in 2019 on the day of the final arguments on the Ayodhya dispute in the Supreme Court.

Other films have, however, faced militant disruptions on campus.

RSS student arm ABVP had disturbed the screening of Muzaffarnagar Baaqi Hai and another documentary, Caste on the Menu Card, in 2015 and 2016, respectively. Several students had faced disciplinary action for screening the films without permission.

The Left-led students’ union too had in 2018 disturbed the screening of In the Name of Love, a film on alleged “love jihad” in Kerala.

Calcutta’s Presidency University too denied permission for Ram ke Naam to be screened by students in 2019. The screening was conducted in defiance of the denial, despite electricity being disconnected by the authorities.

The film is about the Hindu nationalist mobilisation to demolish the Babri Masjid. It was released in 1992, shortly before the December 6 demolition.

Patwardhan had told this newspaper last year: “Why was Ram ke Naam attacked? They (proponents of Hindutva) don’t want their own people to see it because some of them have changed their minds after watching it....

“Even 30 years later I still come across kar sevaks and sympathisers who had gone for the demolition but contacted me to tell me that the film had opened their eyes.”