But in some areas, lights and life switched off since 1976 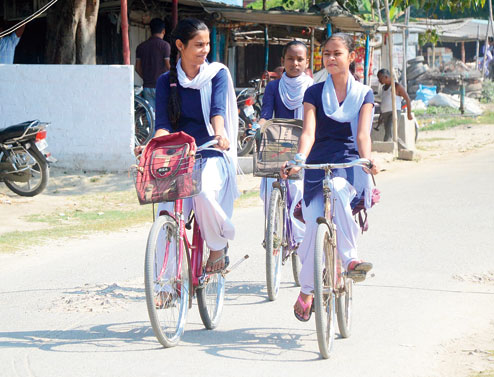 Daya Kumar Singh, 45-year-old father of two daughters and two sons, feels secure about his future as he has a job that earns him around Rs 6,500 a month.

His fourteen-year-old younger daughter, Ritu Kumari, is confident about pursuing her dream of becoming a government employee, as reaching school is no longer a problem for her.

The lives of the father and the daughter - residents of Pakari, around 23km from Patna - capture the story of empowerment in dusty corners of Bihar, which

were known more for caste conflicts, women's deprivation and abject poverty a decade ago.

The change agent for both the father and the daughter is the humble bicycle.

Daya Kumar works in the Hero Cycles plant in Bihta, around 36km from Patna, and the job has given him a security that his days as a casual manual labour could have never given.

"Am so happy that this cycle factory has been set up here... Otherwise, I would have had to keep searching for gainful employment all through my life," said Daya Kumar, who has worked as a farm labourer and done odd jobs in small factories to feed his family of six.

In the last two years, several prominent cycle manufacturing companies - Hero Cycles, Avon Cycles and TI Cycles - in India have tiptoed to Bihar and more companies are showing interest to set up their base in the state.

One of the major triggers behind Destination Bihar for these companies is a government programme that chief minister Nitish Kumar launched in 2006, wherein girls enrolled in Class IX in government-run or aided schools were given Rs 2,000 in cash to buy a bicycle.

The main aim behind the programme - which was later expanded to include boys as well and the aid increased to Rs 2,500 - was to reduce gender gap in enrolment in schools. Since 2006-07, the state has recorded around

Leading the pack of the cycle companies in Bihar is Hero Cycles, which has invested Rs 55 crore to set up a modern plant in Bihta, around 35km from Patna, and employed over 250 people, the majority of whom are from the area. The mother cycle plant has brought two ancillary units - with a total investment of around Rs 25 crore - creating employment opportunities for another 150 people.

"At present, we have a capacity of 3,000 bicycles a day, but we would scale up to 5,000 cycles a day very soon and we would hire more people," said Z. Siddiqui, head of the Hero Cycles plant.

Avon Cycles, which has a plant in Hajipur Industrial Estate, is also planning expansion to cater to the market.

Though the investments in cycle plants do not run into hundreds or thousands of crores, the benefits of such plants are aplenty for a state like Bihar, which hardly has any organised industry. Among the major Indian states, Bihar has the lowest contribution to industrial sector - 18.4 per cent in 2013-14 - in the gross state domestic product, which captures the value of all goods and services produced in the state in a year.

Low contribution to GSDP from industrial sector means that the state lacks in industry, which results in poor tax collection and lack of employment in organised sector.

As the eastern states - including Bengal, Bihar, Odisha and Assam - comprise around 45 per cent of the country's bicycle market of around Rs 9,500 crore, Bihar can become the destination for cycle manufacturers, said cycle industry insiders.

If the cycle firms make a beeline for Bihar, it will augur well for the state, which faces the chronic problem of lack of employment in the organised sector.

"We hope that the cycle companies will give the much needed push to the state's industrial sector and create jobs," said Shyam Rajak, the industry minister of Bihar.

The changes in the life of Daya Kumar - and his colleagues like Ravi Kumar and Upendra Kumar, who were also engaged in manual casual labour before getting employment at the Hero Cycles plant - bears testimony to the fact that Nitish's plan two for the state may work.

His first plan of empowering the women seems to have worked as girls, with their school bags, pedalling to schools has become a common sight in rural Bihar.

Daya Kumar's daughter Ritu pedals around 5km every day from her village to Dhandhari Sarvodaya Uccha Vidyalaya in Moriama, also in Patna district, to pursue her dream of becoming a government employee, a much-cherished goal in one of the poorest states in the country.

"My elder daughter did not finish her studies and I married her off when she turned 18. The younger one wants to study and I will support her," said Daya Kumar, a proud father.

Several factors may have contributed to this trend of girls showing willingness to go to school, but social scientists have linked this welcome change in Bihar to the government-sponsored cycles programme. The results speak for themselves as school enrolment among girls in Bihar has not only increased in the last 10 years, the dropout rates have also drastically fallen. (See chart)

"Long distance from schools have often been one of the major reasons behind poor enrolment of girls, but the cycle has taken care of that concern," said Chinmaya Kumar, country economist, India-Bihar programme, International Growth Centre.

In a paper that he has co-authored with Maitreesh Ghatak of the London School of Economics and Sandip Mitra of the Indian Statistical Institute, Calcutta, Chinmaya has found out that the model of direct benefit transfer - in this case cash for the bicycle to the beneficiary - is working efficiently in Bihar.

Not just for the beneficiaries, the cycle scheme seems to be working for the political masters, as Bengal chief minister Mamata Banerjee has also decided to distribute 40 lakh cycles to school students in the run-up to the 2016 Assembly polls in the neighbouring state.

And in this poll season in Bihar, the Nitish Kumar-led Grand Alliance is hoping to ride to victory with the support of the beneficiaries from the programme for which the government has spent more than Rs 1,500 crore.

"My father has told me that Nitishji has given me this bicycle," said Soni Kumari, a Class IX student of Rajkiya Krit High School in Vaishali district, pointing to her purple bicycle.

Every day, Soni - the daughter of unlettered parents - pedals 5km to come to school to pursue her dream of becoming a teacher. The most basic two-wheeler has not only brought the school closer to many girls like Soni and Ritu, it has changed some traditional notions.

"Earlier, the responsibility of going to the market was only with my brother... Now, I also go to the market riding my bicycle," said Aditi, a classmate of Soni, the twinkle in her eyes while mentioning that she could match her brother could not be missed.

Talking about the changes that cycle has brought to his daughter Ritu's life, Daya Kumar said: "I find my younger daughter more confident than the elder one."

Team Nitish is banking on this confidence among the girl child and the pride among their parents as the game-changer in the Bihar polls.