Farmers’ issue, Covid-19 vaccine among other topics discussed in meeting 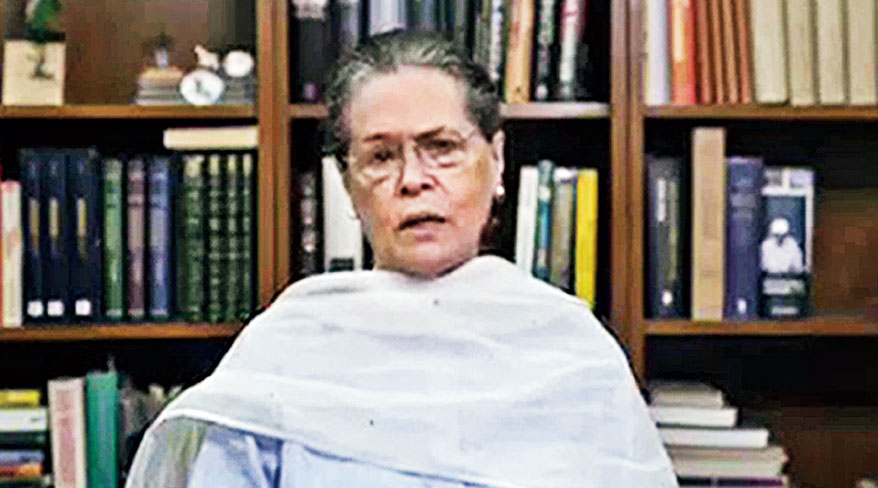 The CWC on Friday, after a three and a half hour meeting, authorised incumbent party chief Sonia Gandhi to schedule the internal election after the conclusion of assembly polls in five states.
Telegraph Picture
Our Bureau, Agencies   |   New Delhi   |   Published 22.01.21, 05:35 PM

The Congress Working Committee on Friday decided that the new president of the party will be elected in June, and approved holding internal discussions on the matter after Assembly polls in five states.

The committee after a three and a half hour meeting authorised incumbent party chief Sonia Gandhi to schedule the internal election after the conclusion of assembly polls in five states.

Addressing a joint press conference, Congress leaders K.C. Venugopal and Randeep Surjewala said elections to the CWC will also be held but it remains to be seen whether they can be scheduled before or after the election to the Congress chief's post.

Sources said the Central Election Authority has proposed the holding of polls for electing the party president and AICC session on May 29 and the working committee discussed the dates, but authorised Sonia Gandhi to schedule them after the assembly polls.

The CWC passed three resolutions demanding a repeal of the three agriculture laws, a time-bound JPC probe into the alleged violations of national security and Official Secrets Act and another to ensure that the government ensures free time-bound Covid-19 vaccination for the poor and oppressed sections.

“The CWC decided that there will be an elected Congress President by June 2021 at any cost,” AICC general secretary K.C. Venugopal said.

He said the little change of schedule depending on the state elections will be decided soon.

He said the Congress president was requested unanimously to reschedule AICC Plenary Session to the end of June 2021 and the Congress chief's election would be concluded by June 2021.

“We will conduct elections as per the Constitution of the party. We need a change of schedule due to assembly polls as counting would be underway in May,” he said.

Asked about any dissenting notes on the holding of elections, Surjewala said, "There was no dissent at the meeting."

He added that leaders like Ghulam Nabi Azad, Anand Sharma or P. Chidambaram were not dissenters but senior members of the Congress party and were all unanimous in deciding to extend the election schedule a little.

“There was no argument in the election schedule issue. The meeting was very fruitful. There is no dispute over conducting an organisational election,” Venugopal said.

He said a little clarity was needed on whether the CWC election can be held before or after the Congress president’s election.

“We have to go to the constitution to look at that. The practice is to hold Congress president’s election first and then the CWC election,” he said.

There were reports about Rajasthan Chief Minister Ashok Gehlot hitting out at those demanding internal elections, saying the leaders should leave this to the party chief and focus on how to fight the Narendra Modi-led BJP. Anand Sharma objected to the tone of his remarks, dubbing it “disrespectful”, the sources said.

The virtual meeting chaired by party chief Sonia Gandhi started with her address.

She then asked AICC general secretary organisation K.C. Venugopal to read out the Organisational Election Schedule sent by the chairperson of the Central Election Authority.

The CEC chaired by Madhusudan Mistry has proposed that the AICC Session and the party president's election be held on May 29, with the process of nomination filing starting in the month of May itself.

Sonia Gandhi took over as the interim Congress president in August 2019 after Rahul Gandhi resigned in the wake of the party’s Lok Sabha debacle in May 2019.

There have been demands from a section of the Congress leaders for having a full-time and active party president and an organisational overhaul.

The CWC had in its earlier meeting decided to hold organisational elections, following a storm in the party in August last year over a letter to Sonia Gandhi by a group of 23 leaders including Ghulam Nabi Azad, Anand Sharma, Bhupinder Hooda, Prithviraj Chavan, Kapil Sibal, Manish Tewari and Mukul Wasnik raising these issues.

Sonia Gandhi had last month met some of these 'letter-writers' and discussed the issues raised by them.