The protection of cows and their "protectors" has a long history in Karnataka, where beef consumption is not as widespread as in neighbouring Kerala. 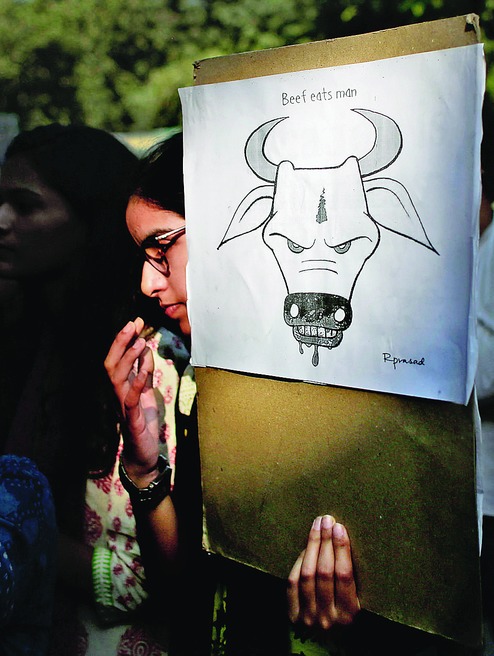 Bangalore, May 4: The protection of cows and their "protectors" has a long history in Karnataka, where beef consumption is not as widespread as in neighbouring Kerala.

But the response of the Congress government in Karnataka yesterday to a public interest litigation challenging the state's cow-protection law has come under severe criticism for what is being interpreted as the party's "soft Hindutva line".

The government defended before the Supreme Court Section 15 of The Karnataka Prevention of Cow Slaughter and Cattle Preservation Act, 1964. The PIL filed by Tehseen Poonawalla, an activist and relative of Priyanka Gandhi's husband Robert Vadra, had sought the court's direction to declare the section unconstitutional.

The section says: "No suit, prosecution or other legal proceedings shall be instituted against the competent authority or any person exercising powers under this Act for anything which is in good faith done or intended to be done under this Act or the rule made thereunder."

While the law was enacted during the time of Kengal Hanumanthaiah, a Congress chief minister 53 years ago, its tenor is now being interpreted as state protection for cow vigilantes, who have perpetrated violence in several states including Karnataka.

The 1964 Act allowed slaughter of only bulls, bullocks and male buffaloes over 12 years and no longer fit for breeding.

A source in the state law department said the law had "stood the test of time" and had been enacted in a different era, when cow protection didn't mean the same.

Neither current chief minister P.C. Siddaramaiah nor his law minister, T.B. Jayachandra, reacted to criticism of the government for defending the law even as cow vigilantes continue to run amok.

"There is absolutely no question of supporting anyone taking the law into his hands. The law is capable of taking care of handling such people, as has been established in the past when cow vigilantes have been arrested and put on trial," he said.

"It is an old law that clearly states that milch cows and calves cannot be slaughtered. It does not in any way protect these Hindutva group vigilantes," Rao added.

This evening, the Karnataka government said Section 15 was not in any way an acceptance of criminal activities in the name of cow vigilantism.

In a statement this evening, the government said: "No institution or individuals can take law into their hands in the name of cow protection. Relevant criminal action will be taken against anyone engaged in violence in the garb of protecting cows."

Congress communications chief Randeep Surjewala said "fact were twisted" to create a false controversy in a "conspiratorial manner to help vested interests in the BJP" as the Karnataka law, passed in 1964, does not give protection to cow vigilantes.

Surjewala said: "Section 15 of the law provides for protection of government officials who are assigned to execute the cow protection law. Every law protects those who do the official job from vexatious litigations and harassment. This is not for protection of individuals or groups who indulge in vigilantism."

But not everyone is happy with the law and the stand taken by the government.

"The Congress has always been a party that smartly used its own soft Hindutva line," said Chandrashekar Patil, a renowned Kannada writer who wants stiffer punishment for cow vigilantes.

"I have for long felt the Congress has departed from its secular ideals of the (Jawaharlal) Nehru days and is peddling a softer version of Hindutva," said Patil, better known in the state as Champa. "Supporting cow protectors has a different overtone now. It doesn't mean the same as then (in 1964)," the writer said.

Sriram Reddy, the CPM state secretary, questioned the secular intent of the Congress. "Contrary to what the Congress has been claiming, it is secular only by credentials, not by conviction," he said.

Cow vigilantism has been on the rise in Karnataka, one among six states, along with the Centre, that had been asked by the Supreme Court to reply to a petition seeking action on such groups.

On April 25, suspected cow vigilantes assaulted a family belonging to the tribal Koraga community in Udupi district for slaughtering a cow. While three attackers were booked by police, an equal number of Koraga men were arrested for the slaughter. "It's high time such laws are repealed as they are totally unconstitutional," said the CPM's Reddy.

Activists of the Hindu Jagarana Vedike lynched a 29-year-old BJP worker for transporting cows in Karnataka last August. The vigilantes had waylaid Praveen Poojary's mini-truck and killed him. Poojary's family had later said the attackers knew his political background.

"The Congress followed such soft Hindutva whenever it suited them," Reddy said, alluding to the then Congress government at the Centre allegedly turning a blind eye to incidents leading to the demolition of the Babri mosque in 1992.

"Perhaps they are now taking a stand with an eye on the Assembly elections (next year)," he added.

Although the Congress government in Karnataka withdrew amendments to the cow law made by the previous BJP dispensation, it did not remove Section 15.

The BJP government under B.S. Yeddyurappa had introduced amendments to make it more difficult to slaughter cows. The proposed amendments in 2010 and 2012 had prohibited the slaughter of cows, calves, bulls, bullocks, male and female buffaloes and their calves. It had also sought to increase the slaughter age from 12 to 15, that too only after obtaining permissions.

As the amendment bills had not received the governor's consent when the BJP demitted office, Siddaramiah had swiftly withdrawn them, saying the existing law was enough.

Perhaps the only party happy with Section 15 is the BJP, which wholeheartedly welcomed the Karnataka government's stand. "We think cow protectors must be protected as they are doing a great job, preserving the most valuable animal that has helped sustain the farm sector for ages," said BJP leader Vaman Acharya.