It came in response to a state government appeal, though, and a lot of the money was contributed by corporate groups and rich NRIs 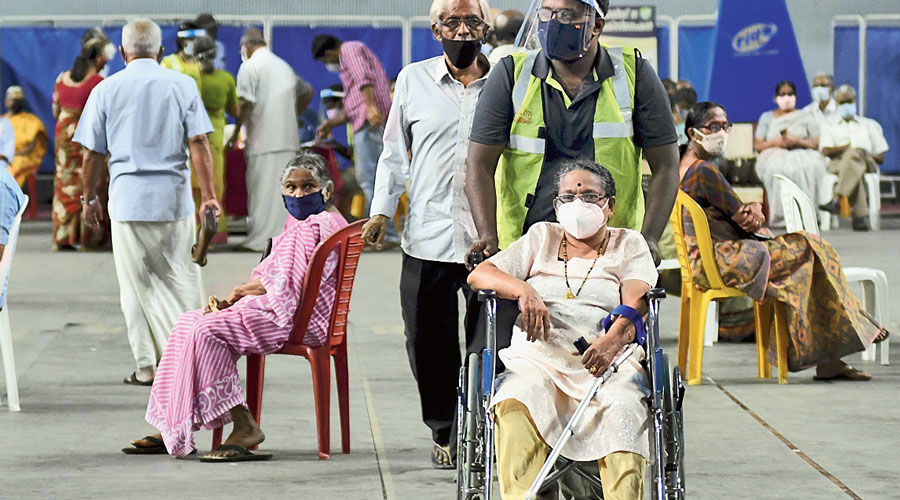 Keralites have taken up a crowd-funding challenge to help the state government vaccinate people free of charge against Covid, and to register their protest against the Centre’s move not to fund the vaccination of those aged 18 to 45.

In just 48 hours after #vaccinechallenge became visible on Twitter and other social media platforms, more than Rs 1.4 crore had been deposited into the chief minister’s disaster relief fund (CMDRF).

Whether or not the initiative — in which the authorities have no role— raises the entire Rs 1,300 crore that the Kerala government believes it needs to vaccinate everyone above 18, chief minister Vijayan extolled is as typical of Keralites’ response to crises.

“That’s the speciality of our state. We have already experienced Keralites’ power of unity,” Vijayan said at his media briefing on Wednesday.

“This kind of popular intervention and support provides us with strength in all crises.”

Some of the contributors suggested the initiative was a “slap” in the Centre’s face. Posts by many of the donors made it clear they had already received both vaccine doses and were chipping in only to help others.

So far, the Centre has been giving vaccines free to the states so that those aged above 45 — currently the only eligible group — can be vaccinated free at government facilities and for Rs 250 at private ones.

But from May 1, when those aged 18 to 45 too become eligible for the jab, it would be up to the states and the private healthcare sector to decide how and at what charges the new group would be vaccinated. Already, some of the vaccine makers have signalled increased prices.

The money raised through the crowd-funding initiative is expected to help Vijayan keep his promise of vaccinating those aged 18 to 45, too, free of charge at government facilities. Kerala has 1.65 crore people in this age group, Vijayan said.

“It’d be a slap on the Centre if it (total donation) reaches 1 Cr before CM’s press meet,” a man named Sreenath had tweeted on Friday.

By 5pm, Friday’s donations alone had reached Rs 1.2 crore, deposited through 5,365 transactions — an average of Rs 2,236 per transaction — the CMDRF website showed.

It’s unclear who started the initiative, which began on Wednesday afternoon.

Many of the donors amplified the initiative’s message by sharing the QR Code of the payment gateways, making it easy for others to donate to the CMDRF. Several others shared their donation receipts to motivate people.

Filmmaker Ashiq Abu and music composer Gopi Sunder were among the celebrity donors.

“We’re in this and we’ll get through this — together. Together let’s help Kerala government to provide vaccines to every person in our state,” a Twitter user, Elina, wrote.

Jithil Jishad tweeted: “This government stood with (the) people when they needed support badly. Now the people are standing with the government when it requires a hand.”

A similar drive had been seen after the 2018 floods when the Centre refused to let the Kerala government accept donations from foreign countries and agencies for reconstruction. It led Keralites and others from across the world to send money to the CMDRF. A similar initiative was seen after the 2019 floods too.

A total of Rs 4,912 crore was received during and after the two floods, according to the CMDRF website.

Independently of the #vaccinechallenge initiative, more than Rs 524 crore has so far been deposited with the CMDRF since November 3 last year to help the state government fight Covid.

These donations came in response to a state government appeal, though, and a lot of the money was contributed by corporate groups and rich NRIs.