Centre chided for its note 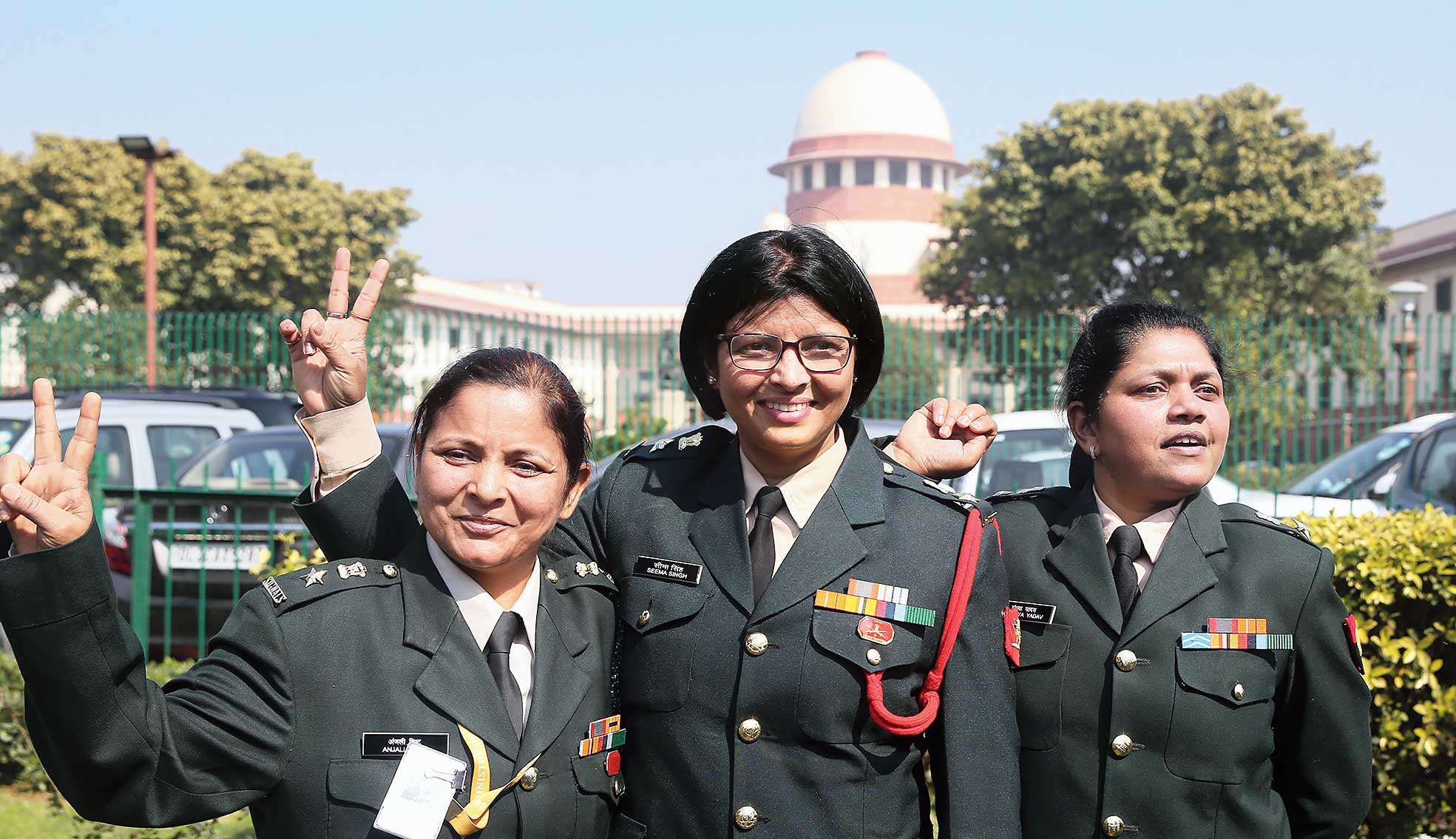 The Supreme Court on Monday directed the government to grant permanent commission to all women army officers, including those in combat areas, dismissing the government’s argument of physiological and social limitations of women as a “deeply entrenched… flawed notion” of gender stereotypes.

The milestone judgment, which signalled a move towards gender parity in the traditionally male bastion, asked the Centre to extend permanent service to all women officers within three months.

Permanent service has been applicable to men so far. Women have till now been inducted through a Short Service Commission (SSC) that lets them work for up to 14 years, and only allowed permanent commission in the army’s legal and educational wings.

Following Monday’s judgment, women will get the same opportunities and benefits as their male colleagues, including ranks, promotions and pensions, and be allowed to serve longer tenures.

Justice Dhananjaya Y. Chandrachud, who headed a two-judge bench, chided the government for placing a note justifying that women could not be granted the status of permanent commissioned officers on a par with men who had completed 14 years of service.

“The submissions advanced in the note tendered to this Court are based on sex stereotypes premised on assumptions about socially ascribed roles of gender which discriminate against women,” Justice Chandrachud, writing the judgment, said.

“Reliance on the ‘inherent physiological differences between men and women’ rests in a deeply entrenched stereotypical and constitutionally flawed notion that women are the weaker ‘sex and may not undertake tasks that are too arduous’ for them. Arguments founded on the physical strengths and weaknesses of men and women and on assumptions about women in the social context of marriage and family do not constitute a constitutionally valid basis for denying equal opportunity to women officers.”

The bench, which also included Justice Ajay Rastogi, clarified that a policy decision the government had taken on February 25 last year to grant permanent commission to women officers would apply retrospectively to all women serving in the army now.

The government had argued that the benefits of permanent commission would apply from February 25, 2019.

Monday’s judgment came as the bench disposed of an appeal the defence ministry had filed against a 2010 ruling from Delhi High Court.

The high court had directed the government to grant the status of permanent commissioned officers to women on a par with men except in combat areas.

The high court’s ruling had come on a petition filed by an advocate, Babita Puniya, and some women officers. The government had then come up with its 2019 policy, which said it was willing to grant permanent commission to only those women officers who had not completed 14 years of service and only in no-combat areas.

The government had also argued that male soldiers were not ready to accept orders from female officers.

Justice Chandrachud came down heavily on the government for such a stand. “To deny the grant of PCs (permanent commission status) to women officers on the ground that this would upset the ‘peculiar dynamics’ in a unit casts an undue burden on women officers which has been claimed as a ground for excluding women.

“The written note (placed by the Centre) also relies on the ‘minimal facilities for habitat and hygiene’ as a ground for suggesting that women officers in the services must not be deployed in conflict zones.”

The court noted that according to the material placed by the women officers — represented by BJP MP Meenakshi Lekhi and Aishwarya Bhati, both senior lawyers and members of the party’s legal wing — 30 per cent of women officers in the country were now deputed to conflict areas.

So the government’s argument that women were not capable of operating in combat areas could not be accepted.

The court said: “If society holds strong beliefs about gender roles — that men are socially dominant, physically powerful and the breadwinners of the family and that women are weak and physically submissive, and primarily caretakers confined to a domestic atmosphere — it is unlikely that there would be a change in mindsets.

“…that role is sought to be diluted by the repeated pleas made before this Court that women, by the nature of their biological composition and social milieu have a less important role to play than their male counterparts. Such a line of submission is disturbing as it ignores the solemn constitutional values which every institution in the nation is bound to uphold and facilitate. Women officers of the Indian Army have brought laurels to the force,” Justice Chandrachud said.

The court said an “absolute bar on women” seeking command appointments “would not comport with the guarantee of equality under Article 14”.

The court said the army had provided “no justification in discharging its burden” as to why women across the board should not be considered for command appointments.

“An absolute prohibition of women SSC officers to obtain anything but staff appointments evidently does not fulfil the purpose of granting PCs as a means of career advancement in the Army,” it said.

“If the army has cogent reasons for excluding women from a particular criteria or command appointment, it may provide them to the relevant authorities and if necessary, to future courts.

“However, such a justification must take place on a case-to-case basis, in light of the requirements and exigencies of a particular appointment,” Justice Chandrachud said.The “blanket non consideration of women for criteria or command appointments”, the judge added, “cannot be sustained in law”.