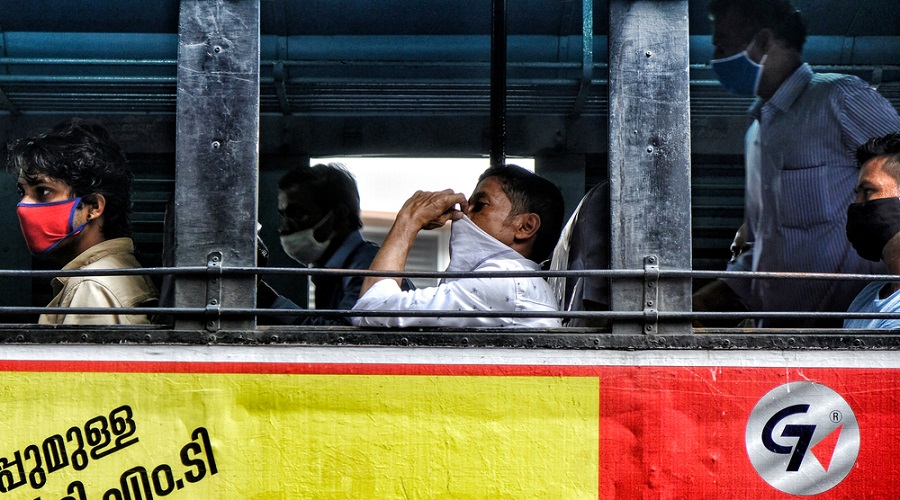 There are serious questions about Kerala’s Covid positivity rate, which is the percentage of people who test positive for the virus out of those overall who’ve been tested.
Shutterstock
Paran Balakrishnan   |   New Delhi   |   Published 20.10.20, 03:47 PM

Is Kerala fumbling its fight against the novel coronavirus? The state was the star performer in India’s anti-Covid-19 drive but now daily infection numbers have soared. Was it the million people who returned from the Gulf and other parts of India who brought the virus with them or the huge Onam festival crowds that triggered the huge rise? Or has Kerala’s campaign to suppress the virus been undermined by the state government failure to test enough?

Whatever may be the causes of the mounting caseload, Kerala government officials insist they’re not worried. “Don’t look at the Covid case numbers, look at deaths. We’ve focused on reducing the deaths,” says Dr Mohammed Asheel, a top state government official. Asheel, who’s executive director of the Kerala Social Security Mission, argues that the government has got its control strategy right and that the virus numbers were bound to rise.  “We delayed the peak. In fact, we have not peaked yet even after eight months,” he says. He adds that other nations are going into a second and even third wave of infections during the same timeframe.

Most crucially, Asheel argues that the actual number crucial to look at is not the number of cases, but the “number of fatalities per million”. On that score, he points out, Kerala is still way out in front. After eight months, the death toll is now a remarkably low 1,161 on October 18. By comparison, Karnataka had 9,666 deaths till October 11. And Tamil Nadu had 10,371 up to October 13. And deaths all over India have crossed 110,000.

Even if the government may have fumbled in other areas, “we have kept the case fatality ratio low,” Asheel says. And how has the state done that? “Through careful clinical management,” says Asheel.  Even with its failings on testing, on case fatalities, Kerala still appears to be doing exceptionally well. Kerala’s case fatality rate (CFR) stood at around 0.36 per cent or 36 per million in October. That compares with Karnataka’s 160 per million and Tamil Nadu’s 140.

But internal medicine specialist Dr Arun N M, who collects material at the ground level from a variety of sources, alleges that Kerala state authorities are undercounting the number of fatalities by around 40 per cent. Says Arun: “A lot of secrecy is there, and a lot of doctors are complaining” about causes of deaths of patients being ascribed to comorbidities rather than the virus. But even using the 40 per cent undercounting estimate, mortality rates don’t come anywhere near neighbouring states. State officials reject any suggestion that the death figures have been manipulated. State health secretary K.K Shailaja says all that counts is how many lives Kerala’s doctors save and that “the mortality rate of 0.36 is among the best in the world.”

Nationally, the government says the country’s case mortality rate is 1.8 per cent, just over half the global average of 3.2 per cent, something government doctors attribute to the fact that the strict nationwide lockdown in March gave doctors here time to learn treatment protocols from other countries. Also, there’s the fact that India has a younger population.

Even though Kerala is doing exceptionally well in keeping down fatalities now, there are concerns that it may not be able to maintain its success if infections keep rising. There are serious questions about Kerala’s Covid positivity rate, which is the percentage of people who test positive for the virus out of those overall who’ve been tested.  Those numbers are bad.  Kerala’s Test Positivity Rate or TPR stands at 18.16 per cent which is more than double the national average of 8.4 percent. The World Health Organization suggests a desirable positivity rate that would indicate an epidemic is being reined in would be less 5 per cent so Kerala’s double-digit positivity rate may be a sign state authorities are losing control of the spread of the virus. In the past week, the state added 50,000 cases to its numbers, the most rapid caseload increase nationwide.

Here’s why testing matters:  without sufficient testing, there’s no way of assessing the true scale of the pandemic and it becomes extremely difficult to figure out the healthcare resources and infrastructure needed. Also, testing is a vital means of infection control because with more testing, more positive cases can be isolated along with their contacts, helping avert the spread of the illness. But when tests are in short supply, they’re only performed on those who have a higher probability of being sick and when the positivity rate rises sharply it’s a clear sign that testing is lagging.

Kerala’s government which reported the state and the country’s first Covid case on January 30 used its solid healthcare system and experience from fighting swine flu in 2009 and the Nipah virus in 2018 to hold back the virus. The daily new infections which were in single digits in mid-May but then the Great Wall of Kerala seemed to develop a breach as infection numbers began climbing steadily. With Onam, the state’s only really big festival that brought shoppers out on the streets, the figures zoomed. On one day, daily infections spiked to 11,755 and the state’s total number of infections since it reported its first case in January stands at over 3.03 lakh. Kerala’s cumulative case load took until September 11 to hit one lakh, it reached one lakh in October and it racked up a further one lakh in only 12 days.  Union Health Minister Harsh Vardhan said at the weekend the state was paying “the price for gross negligence” during the Onam festival when services were unlocked.

With the caseload surging, the anti-Covid battle is taking its toll on Kerala’s medical fraternity. Doctors and nurses in the state who don’t want to be named say they are “tired and frustrated”. Also, the state is so short of money that government salaries – including doctors and nurses – have been cut at a time when everyone is working longer hours and in very difficult conditions.

Asheel, himself, says he has gone home only occasionally in the last eight months and has mostly slept in his office. His wife, who’s also a doctor, has also been going on 10-day shifts and they’ve mostly sent their daughter to stay with a neighbour.

Couldn’t the virus have continued to be suppressed as indeed Kerala managed to do for several months? Asheel points to the population density to defend the state’s performance. Kerala’s population density is 859 per square kilometre which is close to twice the national average of 467. Sweden, one of the few countries which hasn’t had a lockdown, has a population density of 26 per square kilometre which has enabled it to stay relatively unaffected by the pandemic -- though its “corona-light” measures are not without controversy as its Covid-19 death rate per person is one of the highest in Europe, and 10 times the rates of neighbouring Norway and Finland. Italy, which was in a desperate state early in the year, has a population density of 216 and is recording daily infection rates of close to 9,000.

In Kerala where the villages and towns merge into one another into what’s called one great rural-urban continuum, keeping the coronavirus at bay was always going to be a tough proposition to say the least. Says Asheel: “Even if I lock up nine out of 10 people in a district, I will still have a higher population density than in Sweden.” Incidentally, at one point, Italy had a death rate of around 20 per cent. Italy was one of the first countries to be hit by Covid-19 and the doctors were just learning how to tackle the illness.

Turning to the most serious concern of insufficient testing, in late June the state was doing only around 5,000 tests daily and it pushed that figure up to a peak number of over 73,000 tests in early October. But that number has since fallen to just over 50,000, a fall attributed to problems in the state’s new Lab Diagnosis and Management System. By comparison, Tamil Nadu, next door, has been conducting around 90,000 daily. Asheel says Kerala had a Test Positivity Rate (TPR) of 3 per cent or even 2 per cent in the early days of the outbreak so there was no indication more tests were needed. I’s only with the TPR hitting more than 18 per cent that it is clear more testing is needed.  “That does indeed indicate we’re testing less than is required,” says Asheel.

And there is another problem with Kerala’s testing. The testing shortfall combines with the fact that Kerala has mostly used the less reliable Rapid Antigen Tests (RATs) rather than the far more reliable RT-PCR tests. The Union Health Ministry, in fact, had sent out a directive to states to only use the RT-PCR tests. Asheel defends using the RAT tests, saying the results from those crucially come back within a few hours. RT-PCR tests, by comparison, take a day at the earliest. If large numbers are being tested by the state, then the results are likely to take even longer. “When you are going for containment and when the spread happens rapidly, you need the results at the earliest. Otherwise, the infected people will be going around normally for three or four days and they will keep spreading the infection,” says Asheel. But one virologist points to a flaw in this argument. “If the RAT tests are coming up with wrong results, then infected people will be walking around without being detected,” he says.

Arun, however, suggests that the state could have purchased larger capacity PCR machines that could have processed a far higher number of tests very swiftly. He points out that Tamil Nadu has consistently done more tests. He notes, however, that Kerala is one of the few states that tests people in hospital before releasing them rather than relying on the number of days elapsed since the initial test.

Even now, Asheel maintains that the situation is under control. Deaths have risen very slightly to about 20 per day. Most importantly, the ICUs have about 60 per cent occupancy. He reckons that case numbers will fall by December. But he warns that there could be a second wave of infections early next year.

Kerala also has its own singular problems. It has a large elderly population and also over 600 old-age homes. There are reckoned to be 4.3 lakh elderly people and, of those, 2.5 lakh are in the most vulnerable category. About 20,000 of these people live in old age homes. These people were asked to stay at home and, in some cases, food was taken to them. Also, mobile units with doctors and nurses did the rounds looking after these people.

Dr Dileep Raman, who’s director and co-founder of cloud-based critical care start-up Cloudphysician, argues that nationwide it’s impossible to keep the virus down forever. “It’s viral kinetics. Either you completely lock down till the vaccine has been found. But that’s not practical,” he says. Raman agrees that a second wave this winter is almost inevitable around the country. “What’s going to happen when the Mumbai trains are fully open? The virus is not going to change its behaviour.”

Kerala now seems to have accepted this inevitability and is no longer screening those arriving by road for Covid and it opened on Saturday the Ayyappa temple in Sabarimala. But there’s been no let-up in the effort to prevent deaths. The state’s using a tiered care system under which mildly symptomatic Covid patients are monitored in nurse-run establishments while just those in serious condition are admitted to hospital. Only the young or those who are infected but display no symptoms can home quarantine.  At the end of the day, keeping the virus under control comes down to being a “disciplined population,” says Raman.  “Unless we’re all model citizens, keeping the virus away is a pipedream,” he says.