Advertisement
Home / India / Covid: Scammers on the prowl in pandemic

Covid: Scammers on the prowl in pandemic

The second wave has devastated India’s medical system; drugs, vaccines, oxygen and other supplies are running out and profiteers are filling the gap 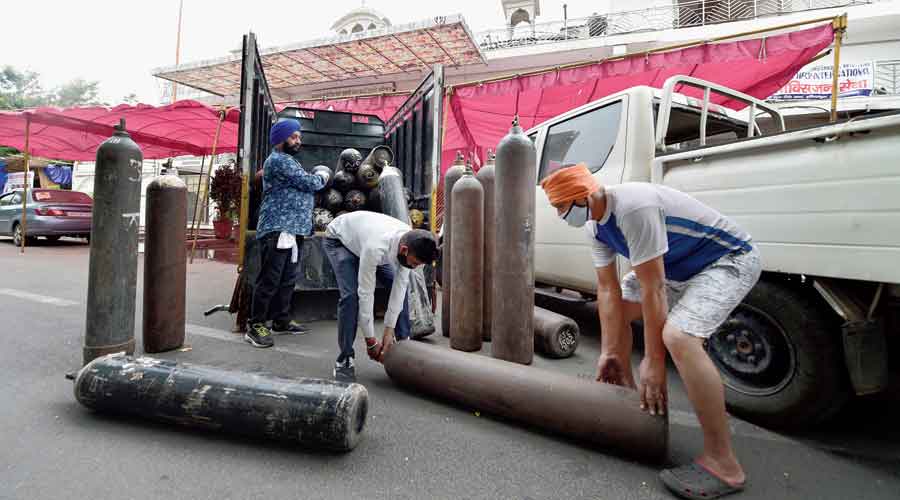 Within the world’s worst coronavirus outbreak, few treasures are more coveted than an empty oxygen canister. India’s hospitals desperately need the metal cylinders to store and transport the life-saving gas as patients across the country gasp for breath.

So a local charity reacted with outrage when one supplier more than doubled the price, to nearly $200 (Rs 14,608) each. The charity called the police, who discovered what could be one of the most brazen, dangerous scams in a country awash with coronavirus-related fraud and black-market profiteering.

The police say the supplier — a business called Varsha Engineering, essentially a scrapyard — had been repainting fire extinguishers and selling them as oxygen canisters. The consequences could be deadly: the less-sturdy fire extinguishers might explode if filled with high-pressure oxygen.

“This guy should be charged with homicide,” said Mukesh Khanna, a volunteer at the charity. “He was playing with lives.” (The owner, now in jail, couldn’t be reached for comment.)

A coronavirus second wave has devastated India’s medical system and undermined confidence in the ability of Prime Minister Narendra Modi’s government to treat its people and quell the disease. There are widely believed to be far more deaths than the thousands reported each day. Hospitals are full. Drugs, vaccines, oxygen and other supplies are running out.

Pandemic profiteers are filling the gap. Medicine, oxygen and other supplies are brokered online or in hushed phone calls. In many cases, the sellers prey on the desperation and grief of families.

“These people, the cyber criminals, were already out there,” said Muktesh Chander, a special commissioner for the Delhi police. “The moment they got this opportunity they switched on to this modus operandi.”

Sometimes the goods are fraudulent, and some are potentially harmful. Last week, police officers in the state of Uttar Pradesh accused one group of stealing used funeral shrouds from bodies and selling them as new. The day before, officers in the same state discovered more than 100 vials of fake remdesivir, an antiviral drug that many doctors in India are prescribing despite questions about its effectiveness.

A relative of a Covid-19 patient carries an oxygen cylinder for refilling in Sangli, Maharashtra, on Monday
PTI

Citing the predatory sales, a top court in New Delhi said this month that “the moral fabric of the society is dismembered”.

Over the past month, Delhi police have arrested more than 210 people on allegations of cheating, hoarding, criminal conspiracy or fraud in connection with Covid-related scams. Similarly, the police in Uttar Pradesh have arrested 160 people.

“I have seen all kinds of predators and all forms of depravity,” said Vikram Singh, a former police chief in Uttar Pradesh, “but this level of predation and depravity I have not seen in the 36 years of my career or in my life.”

The scams and profiteering represent the flip side of the huge online help system that has emerged to fill the void left by the government. Do-gooders across the country have swooped in to connect those in need with lifesaving resources.

The ad hoc system has limits. Vital supplies like oxygen are still stuck in bottlenecks, and people keep dying after hospitals run out. Vaccine and pharmaceutical makers can’t keep up. Politicians in some places are threatening people who publicly plead for supplies.

That empowers the black market, with its exorbitant prices and dicey goods. Many people feel they have no choice.

Rohit Shukla, a graduate student in New Delhi, said that after his grandmother died in late April in a neighbouring state, an ambulance driver demanded $70 (Rs 5,113) for the three-mile ride from the hospital to the cremation ground, over 10 times the normal price. When the family arrived, workers demanded $70 for firewood that should have cost $7 (Rs 513).

Supply and demand might account for some price increases, Shukla said, but he suspects more than that.

“Everyone is trying to profit from this pandemic,” he said. “I don’t know what has happened to people.”