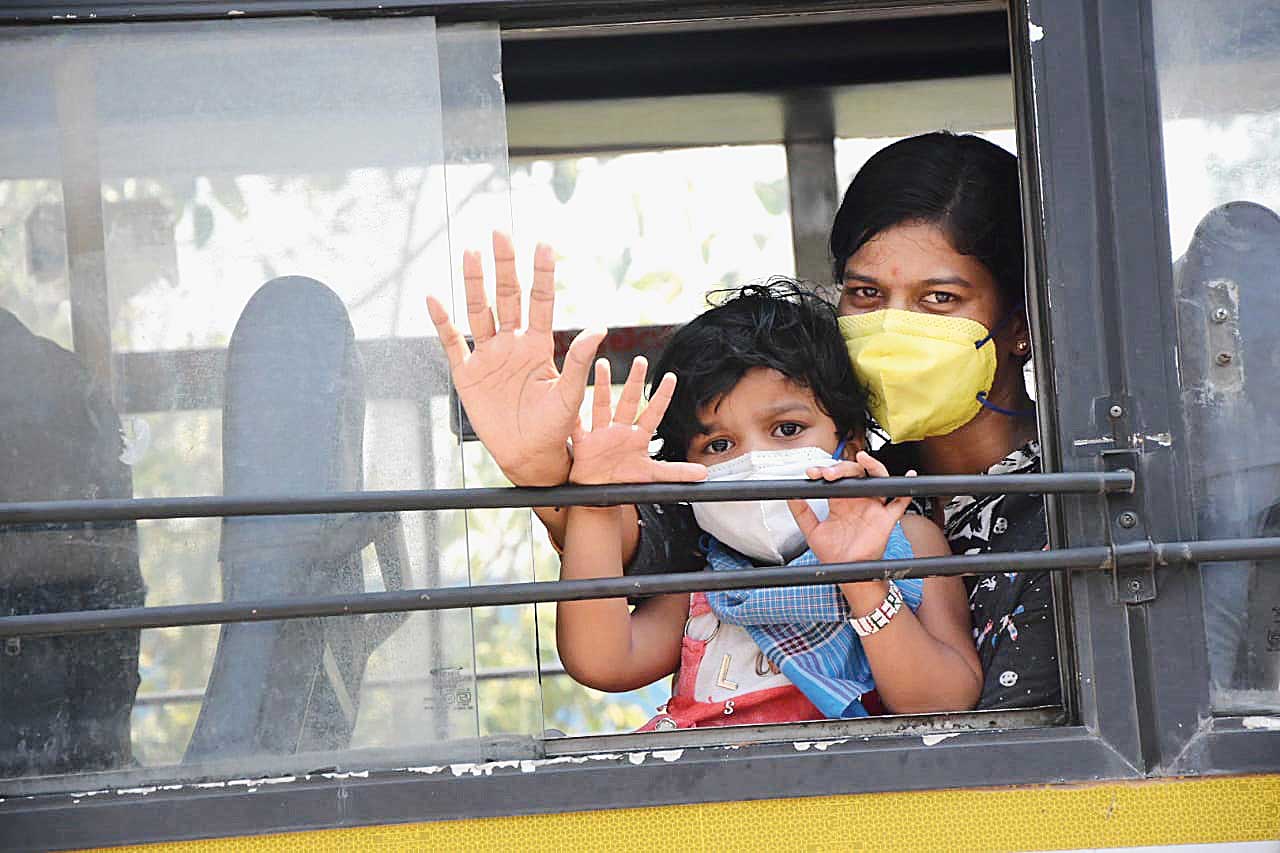 A woman and a child at the Bangalore bus station to catch buses operating to other districts in Karnataka on Saturday.
Photo credit: Bangalore News Photos
K.M. Rakesh   |   Bangalore   |   Published 02.05.20, 09:07 PM

The Karnataka government had decided to charge migrant workers double the usual bus fare for travelling home within the state but rolled back the hike on Saturday following an uproar and opposition criticism of “cruelty” to the poor left penniless by the lockdown.

Education minister S. Suresh Kumar said the BJP-led government had decided to reduce the charge from two-way fare to the usual one-way fare for a single trip.

“The chief minister has given green signal for single fare for all the workers travelling on state road transport buses from the Bangalore bus station,” Suresh Kumar tweeted on Saturday.

The change in decision came as the number of people waiting to travel home within the state swelled by the minute and after a threat from the opposition Congress to launch a state-wide agitation for free transport.

Earlier, on Friday, the government had announced that it would charge double the fare from migrants who want to travel home by state buses.

State Congress president D.K. Shivakumar said it was cruel to charge anything from the poor who have been hit the hardest by the Covid-19 lockdown. “We have sent aircraft to bring Indians stranded abroad. So why can’t our governments in the state and the Centre allow free transport for poor migrant workers who have been left penniless after the lockdown?” Shivakumar told reporters on Saturday. Some migrant workers had met him, he added, requesting his intervention.

“It is cruel to charge anything at all from the poor who have not been earning anything since the lockdown. Isn’t it the duty of governments to provide them free transport in such times?” he said. “Imagine how much a family of three or four would have to shell out.”

Shivakumar said he was even willing to pay for a part of the travel expenses, saying the total cost for the government shouldn’t be more than Rs 10 crore, and threatened to launch a statewide agitation to get the government to provide free transport.

The Karnataka State Road Transport Corporation had on Friday announced a list of close to 600 special buses to connect all the districts in the state. But a shock awaited migrant workers when they reached the bus station in Bangalore city. They would have to pay more than double the usual fare, they were told.

An official with the transport corporation explained that the 55-seater buses could carry a maximum of 30 passengers because of the social-distancing protocol now in force, allowing only two passengers on seats for three and one on seats for two.

“The buses are running nearly half-empty and this operation would pile up on the Rs 5.3-crore loss we made last year,” said the official who asked not to be named.

Had the government struck to its Friday’s decision, a passenger to Bagalkot, for instance, would have had to pay the round-trip fare of Rs 1,311 for the one-way, 475km non-air-conditioned journey from Bangalore. That would have been about 120 per cent more than the regular two-way fare.

Muniyappa, who works in Bangalore as a gardener, said he would have had to pay Rs 260 to reach home in Mandya, about 100km from here.

He was okay with Saturday’s decision to roll back the fare — to Rs 130 in his case. “I can afford that much,” he said.

The demand for free travel has arisen because, unlike Muniyappa, there are people who need to travel long distances to reach home. Also, more the family members means more strain on the pocket.

The transport official said the decision to charge the passengers had been taken because of “misuse” during the initial services.

“We had run 25 free bus services until Thursday. But several people who could otherwise afford to pay misused the free service,” he said.