At least 1,000 migrant workers had gathered near Bandra, demanding to be allowed to return home 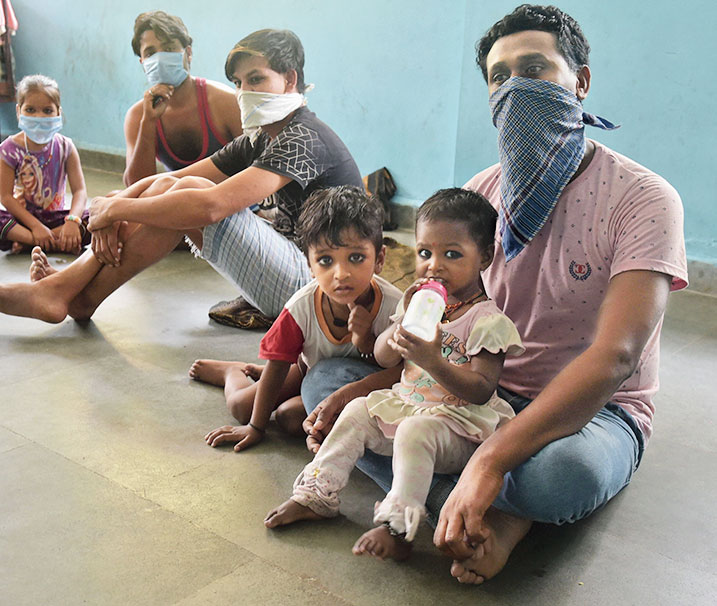 The Maharashtra government has suggested that Tuesday’s chaos at Bandra involving migrant workers could be part of a conspiracy to destabilise the state’s coalition set-up, insisting that the source of confusion was the railway ministry.

At least 1,000 stranded migrant workers had gathered near Mumbai’s Bandra railway station on Tuesday afternoon, demanding to be allowed to return home, and dispersed after two hours following a police baton charge.

Senior ministers Ashok Chavan and Balasaheb Thorat, both from the Congress, on Wednesday blamed the chaos on a leaked internal communication of the railways suggesting the running of special trains for stranded migrant workers.

They held a media conference to ask the Centre to look into the railway ministry’s role, alleging the booking of tickets was “going on till April 14 afternoon”.

Chavan, the PWD minister, referred to “a letter dated April 13 which suggested special trains (named Jansadharan Specials) would be run for the stranded passengers and migrant workers”.

“This letter was written by A. Malleswara Rao, deputy chief commercial manager, South Central Railway. A report was shown on the basis of this letter. The information went viral and people came out hoping they can return home.”

The railway ministry acknowledged the letter but said it was an internal communication, not meant for the public’s eyes. It issued a statement saying train services had been cancelled till May 3, the last day of the current phase of the lockdown.

The state’s Shiv Sena-NCP-Congress government has filed three FIRs, one against 1,000 unknown people, another against an ABP Majha journalist who had reported that special trains would be run for stranded migrants, and the third against self-styled labour activist Vinay Dubey who had posted video messages exhorting migrant workers to go home. Both the reporter and Dubey have been arrested.

“I’m not here to do politics or indulge in a blame game. But who is responsible for the leak of this letter? The ministry of railways cannot escape responsibility. Ticket bookings were going on till April 14 afternoon,” Chavan said.

“The situation could have turned very serious; it might have triggered a stampede. The police cannot anticipate and control such a spontaneous crowd. The Prime Minister and the railway minister must find out which officer leaked the internal communication.”

Chavan went on: “We have noticed the campaigns on social media: people were demanding the resignation of chief minister Uddhav Thackeray and talking about the imposition of President’s rule. Who controls the social media? Who were the people running these campaigns? Who was trying to create panic?

“This smells of a conspiracy. We are aware there are people who want to disrupt the state government’s fight to control the coronavirus and create communal disturbances. We are probing every aspect.”

A campaign on social media and some TV channels had sought to lend a communal colour to Tuesday’s incident, saying the crowd had gathered near a mosque close to the railway station.

Responding to a question about prominent people tweeting about the mosque and asking why those assembled weren’t carrying luggage if they wanted to catch a train, revenue minister Thorat said: “People from all communities had assembled; there was no role of the mosque in it. The sole objective was to find out about trains.”

He added: “There was an impression that special trains would be run and suddenly word spread that the trains wouldn’t be run as the lockdown had been extended. People just came out in desperation, to find out whether the trains were going.

“Some people are questioning the presence of the Congress MLA (Zeeshan Siddique, who had tried to pacify the crowd). It is his constituency; he and his father — who has been a multi-term MLA from there — have an emotional connect with the people. They came to help the police. The people returned on their request.

“The people didn’t complain about (lack of) food or make any other complaint. They just wanted to go home. And all this happened because of the rumour that special trains would be run.”

Asked about the BJP allegation that this was a conspiracy to create trouble during the lockdown, Chavan said: “Everybody knows something went wrong but who is responsible? ….Why should the Maharashtra government do it? …. The railway ministry should reveal how the rumour spread.”

Uddhav has issued a video message asking the migrant workers to be patient.

“Live with us, we will face the crisis together. We are not happy to lock you down but we all should understand the situation,” the chief minister said.

He requested people not to bring politics into the matter, arguing that all the leaders – Narendra Modi, Sonia Gandhi, Sharad Pawar – were fighting the pandemic together.