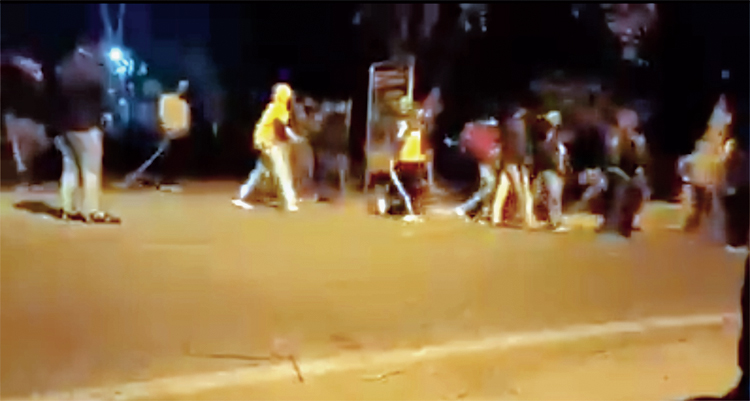 A JNU professor’s wife was chased on the campus on Sunday evening but managed to barricade herself in her flat.

With the attackers banging on her door, she was able to get through to Delhi police’s women’s helpline, 1091, and the control room number, 112, at least four times between 7.16pm and 8.48pm, she says. Each time she pleaded with the police to send officers to her quarters at JNU’s New Transit Hostel, which houses teachers and their families.

The fourth time she had been connected to 1091, she asked: “Will you only come when everything is lost?”

On Monday, the Delhi Commission for Women summoned the police and the university administration for the “murderous assault on female students and faculty”.

Videos of Sunday night’s events also show the police standing by as scores of youths walk out of the campus with sticks. This reporter saw these men stop passers-by on the streets outside, assault them and force them to chant “Bharat Mata ki jai” right under the police’s nose.

The streetlights had been mysteriously turned off, and the police did not allow journalists to enter the campus to attend a news conference the teachers wanted to hold.

The Congress, Aam Aadmi Party and the Federation of Central University Teachers’ Associations have accused the police of complicity.

Delhi police spokesperson M.S. Randhawa, however, said on Monday that the force had responded immediately to calls made to 112.

“Around 5pm yesterday, Delhi police received a call that there had been a scuffle between students in JNU…. These calls came from the hostels…. Delhi police responded at the time and brought the situation under control,” he said.

Randhawa said that law and order on campus was the responsibility of the university administration, which has private guards for this.

Also, on Delhi High Court’s orders, a small police team — usually in plainclothes — guards the administrative block. Randhawa said that these men had responded to calls till 7.45pm, when the university administration gave a written request for police assistance.

After this, Randhawa said, the cops held a flag march on the campus. He did not specify the time.

Outside the campus on Sunday night, Swaraj India’s Yogendra Yadav and the CPI’s D. Raja and Annie Raja were pushed away from the university gate by a crowd, many among whom were seen speaking to local BJP leader Anil Sharma.

None of the gadgetry seen during the citizenship amendment protests — such as drones and the video cameras recording crowds for facial recognition — were used at JNU on Sunday night.

Even on Monday, Right-wing agitators continued to block the JNU main gate from outside through the evening as the police watched.

Randhawa said the crime branch was collecting CCTV footage of Sunday’s events from the campus.

The crime branch is reportedly probing an FIR for rioting and destruction of public property against unknown people. Also, a fact-finding team has been set up under joint commissioner of police Shalini Singh.

No one has been detained or arrested, though. Nor have any serious charges such as attempt to murder, or even assault with deadly weapons, been filed although a woman teacher and a woman student leader have received severe head injuries from being beaten with iron rods. Altogether 34 were treated at AIIMS.

In contrast, the police had not waited for any letter from the Jamia Millia Islamia last month when officers went on the rampage on the campus, not sparing its libraries and a place of worship, ostensibly to locate agitators who had burnt buses.