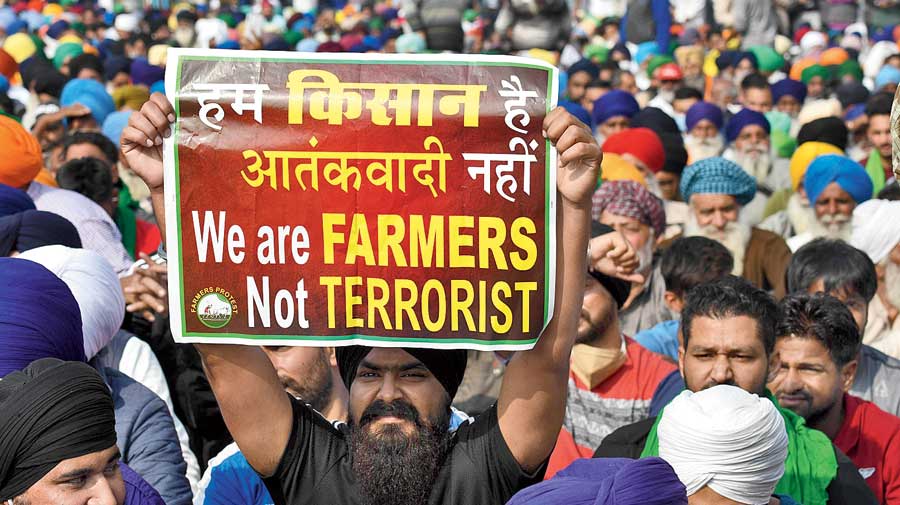 The Congress on Sunday backed the farmer unions’ call for a Bharat Bandh on December 8, asking party workers to mobilise support for the agitation against the new farm bills.
The chief ministers of Punjab and Rajasthan indicated these Congress-ruled states would ensure the success of the nationwide strike.

Boxer Vijender Singh at the Singhu border to show his support for the agitating farmers.
Prem Singh

The Congress central leadership has instructed the state units to hold demonstrations and meetings in every district to garner support for the farmers.

“Farmers from Punjab and Haryana are the main producers of wheat and paddy, and they are protesting. If the situation is not resolved soon, we will see farmers across the country joining them,” NCP leader and former Union agriculture minister said.

Pawar regretted that the Narendra Modi government had passed the three bills in haste, ignoring the Opposition’s demands for a deeper examination and consultations with the stakeholders through a parliamentary committee.

A farmer climbs up a tower to fix his organisation’s flag during the ongoing protest against the new farm laws at the Singhu border between Delhi and Haryana on Sunday.
PTI

All the farmers’ objections that the government is discussing now had been raised by the Opposition parties but the BJP had bulldozed every hurdle in Parliament. The farmers have now forced the administration to relent by demonstrating their collective strength.

Congress spokesperson Pawan Khera questioned both the Prime Minister’s intention and wisdom, alleging that every decision of his that had not been envisioned by previous governments had proved disastrous.

“The country suffered whenever the Prime Minister took a decision on his personal initiative, be it the demonetisation or these farm laws. The question today is, why are the farmers compelled to sit outside Delhi in protest? What was the (reason for the) haste in bringing these laws in the midst of a pandemic?” Khera said.

“How was it decided that these laws are in the interest of the farmers, when the farmers say (these laws) will ruin them?”

Khera added: “Now the cat is out of the bag — the agriculture minister (Narendra Tomar) has himself said that the corporate (groups) will get angry if we repeal these laws. We know in whose interest the Prime Minister acted, the farmers know, the world knows.

“The conspiratorial attitude of the government was also manifested in the attempts by ministers and BJP leaders to malign the farmers. They were called Khalistani, Pakistani and Chinese agents.”

An ex-serviceman takes part in the agitation at the Singhu border.
PTI

The Congress has also brought the charge of doublespeak against the government, which has been claiming the Agriculture Produce Marketing Committee Act will not be abolished and the new laws will not affect the mandi (wholesale market) system that ensures a minimum support price for farmers.

The party has uploaded a video from an event during the recent Bihar elections that shows the Prime Minister purportedly saying: “Nitish Kumarji is present here. He understood how the APMC Act has harmed the farmers and hence he scrapped it very early in his tenure. What Bihar did, the entire country is now traversing the same path.”

Bihar abolished the APMC Act and the mandi system in 2006. Various studies have shown how this hurt the state’s farmers. While Bihar has the worst public procurement system now, its farmers’ incomes reduced sharply after the APMC Act was revoked.

The Congress has uploaded another video showing farmers in Bihar talking about their plight and praising the system in Punjab and Haryana.

munications chief Randeep Surjewala tweeted: “Out of 30 lakh metric tonnes of paddy, only 793 metric tonnes procured in Bihar by the government agency. The MSP for paddy is Rs 1,868 but farmers in Bihar had to sell their produce in market for Rs 8,00 per quintal.”

Punjab chief minister Amarinder Singh has reaffirmed his support for the agitating farmers, dismissing speculation about a change in his stand under pressure from the Enforcement Directorate.

Amarinder questioned the Centre’s intentions, saying: “The farmers gave 10 days’ notice to the Centre before marching to Delhi. Why did they not start negotiations then?”

“The farmers were protesting, sitting on train tracks, for two months in Punjab and my government did not take a single step against them. Why? Because we know they are right, their demands are genuine. Congress-ruled states passed laws against the central laws. We are fully with the farmers.”