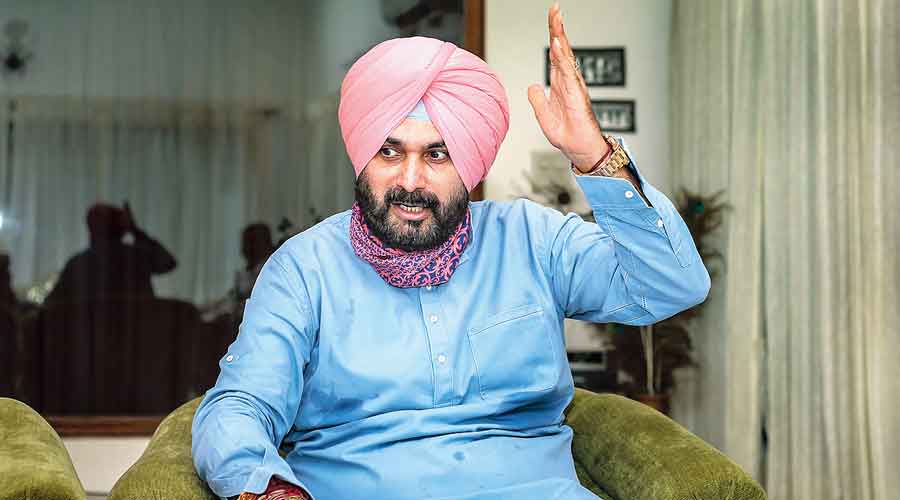 Complaints against Navjot Singh Sidhu have finally reached the Congress Disciplinary Action Committee but the mercurial leader is unfazed, declaring that time will answer questions about him.

Disciplinary Action Committee member Tariq Anwar confirmed that a letter about Sidhu’s activities sent to Congress president Sonia Gandhi by Punjab in-charge Harish Chowdhary had reached them. The Punjab Congress Committee (PCC) has endorsed the complaints, insisting that anti-party activities by any leader should not be tolerated. Anwar indicated that action against Sidhu would be decided after consultation with other members.

Sidhu appeared to have responded to the developments through a tweet: “Apne khilaf baaten main aksar khamoshi se sunta hun… jawab dene ka haq main waqt ko de rakha hai (I often hear talk against myself in silence.… I have left it to time to give the answers).”

Sidhu is almost going solo, without following the directions of the state unit. He was not even present when new PCC chief Amrinder Singh Raja Warring took charge.

Sidhu sent out an unambiguous message to the party by holding a meeting with Prashant Kishor on the very evening when the election consultant declined the Congress offer to join. He also responded to Kishor’s tweet of a new political beginning by saying: “The first blow is half the battle my friend…. A good beginning always makes a good ending…. Best always in your sincere efforts to honour the spirit of our Constitution…. ‘The power of people must return to the people’, manifold….”

Sidhu, who resented the choice of Charanjit Singh Channi as chief minister before the Assembly elections and then his own removal as Punjab Congress chief after the polls, is obviously feeling uncomfortable in the party and sending out signals of his readiness to carve out a new course.

The Congress, which realised during the elections that Sidhu was not a team man and wanted to impose his ideas on the party, is preparing to deal with him firmly instead of reaching out to him.

When Hardik Patel removed signs of his association with the Congress from his Twitter handle despite being the working president of the party, Rahul Gandhi himself reached out to him and asked the Gujarat leadership to resolve the problems. Although Hardik also spoke against the party’s work culture and decision-making, the high command is keen to retain him even as it chose to act tough on Sidhu, who too was seen as close to the Gandhi family.

Acting on the recommendation of the new PCC chief, Punjab in-charge Choudhary wrote to Sonia recommending that a showcause notice be issued to Sidhu for anti-party activities. In the letter dated April 23, Chaudhary attached a detailed note by the Punjab Congress regarding Sidhu’s “current activities”.