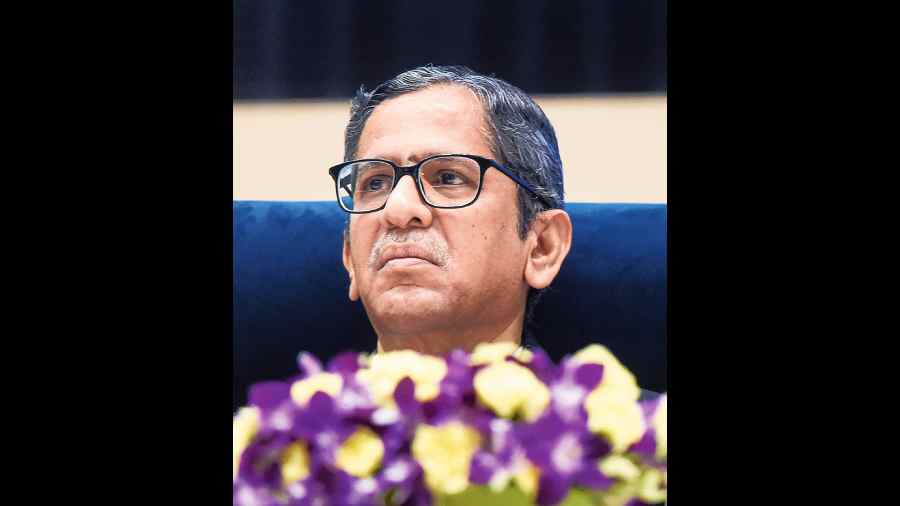 Chief Justice of India N.V. Ramana on Saturday castigated “illegal arrests”, custody torture and biased investigations by police while spelling out why governments deserved most of the blame for the backlog of 4 crore court cases in the country.

“If police investigations are fair, if illegal arrests and custodial torture come to an end, then no victim will have to approach the courts,” Justice Ramana told an audience that included Prime Minister Narendra Modi and the chief ministers of the states.

He said the Union and state governments accounted for 50 per cent of the cases in the country, either moving court against citizens or forcing citizens to move court for redress against government inaction or harassment.

Another source of unnecessary cases burdening an overworked judiciary, he said, was the governments’ tendency to defy court orders, resulting in contempt.

The Chief Justice’s remarks on “illegal arrests” come a day after a sessions court in BJP-ruled Assam said the northeastern state was becoming a “police state”. It was referring to Gujarat MLA Jignesh Mevani being subjected to repeated arrests by Assam police, the latest in a case the sessions court found “manufactured”.

Addressing the 11th joint conference of chief ministers and high court chief justices, Justice Ramana said the governments were the “biggest litigant”, accounting for 50 per cent of all cases, of which two-thirds related to land acquisitions.

“If a tehsildar acts upon a grievance of a farmer regarding a land survey, or a ration card, the farmer would not think of approaching the court. If a municipal authority or a gram panchayat discharges its duties properly, citizens need not look to the courts,” he said.

“If revenue authorities acquire land through due process of law, the courts would not be burdened by land disputes. Apparently, these cases account for 66 per cent of the pendency.

“It is beyond my understanding as to why intra and interdepartmental disputes of the government or fights between PSUs and the government end up in courts.”

Justice Ramana said: “If service laws are applied fairly in matters of seniority, pension and so on, no employee will be compelled to go to the courts. It is a well acknowledged fact that the governments are the biggest litigants accounting for nearly 50 per cent of the cases.”

He added: “The decisions of courts are not implemented by governments for years together. The resultant contempt petitions are a new category of burden on the courts, which is a direct result of the defiance by the governments. Deliberate inactions by the governments, despite judicial pronouncements, are not good for the health of democracy.”

Justice Ramana said that compliance with the law and the Constitution was key to good governance, but governments often failed to seek the opinions of their legal departments in their rush to implement executive decisions.

Often, governments abdicate their responsibilities, leaving the courts to decide what should be executive issues, he said.

“The judiciary is also confronted with the issue of the executive willingly transferring the burden of decision making to it. Although policymaking is not our domain, if a citizen comes to the court with a prayer to address his grievance, the courts cannot say ‘no’,” Justice Ramana said.

At times, the Chief Justice said, ambiguities in legislations add to the existing legal issues. If the legislature passes a law with clarity of thought, foresight and people’s welfare in mind, the scope for litigation gets minimised.

“The legislature is expected to solicit the views of the public and debate the bills, clause by clause, threadbare before enacting a law. When I expressed concern about the passing of laws without much legislative scrutiny on the 15th of August last year, I was misunderstood in some quarters,” Justice Ramana said.

“Let there be no doubt: I have the highest regard for the legislature and the elected representatives. I value the role played by each of them in our democracy, right from a ward member to a Member of Parliament. I was merely pointing towards certain deficiencies.”

Justice Ramana stressed that Lok Sabha Speaker Om Birla had recently agreed with his views and said: “Laws should be made after thorough debates and discussions, incorporating the needs of the aspirational sections of society.”

Justice Ramana said litigation was triggered mainly because of two reasons: “nonperformance by the various wings of the executive” and “legislature not realising its full potential”.

“I am aware that there are certain concerns with the judicial system also with regard to timely delivery of justice and pendency. Pendency is often blamed on the judiciary,” he said.

“Due to paucity of time, I cannot explain (it) in detail. But a keen look at the websites of the courts will give you an idea about the huge workload on judges. The number of cases filed and disposed on each day is unimaginable.”

“No doubt, the PIL has served a lot of public interest. However, it is sometimes being misused to stall projects or pressurise public authorities. These days, the PIL has become a tool for those who want to settle political scores or corporate rivalries. Realising the potential for misuse, the courts are now highly cautious in entertaining (them),” he said.

Justice Ramana said the facilities and environment in some district courts were so bad that let alone women litigants, even women lawyers felt reluctant to enter the courtrooms.

He clarified that his proposal was not aimed at usurping the powers of the governments and that the proposed authorities, to be headed by the chief justices concerned, would have representatives from the central and state governments.

The Chief Justice acknowledged that “the Union government has been making reasonable budgetary allocation through its centrally sponsored scheme for free legal aid”.

But he added that data since the inception of the scheme in 199394 suggested that the allocated funds remained underutilised because of procedural difficulties.

Justice Ramana said the judiciary would never overstep its limits.

“While discharging our duties, we all must be mindful of the Lakshman rekha. The judiciary would never come in the way of governance, if it is in accordance with law. We share your anxiety and concern regarding the welfare of the people,” he said.

CJI: Be mindful of 'Lakshman Rekha'