Born in Kutch in 1940, pottery was her secondary subject that she honed to perfection during the course of her 50-year-long career 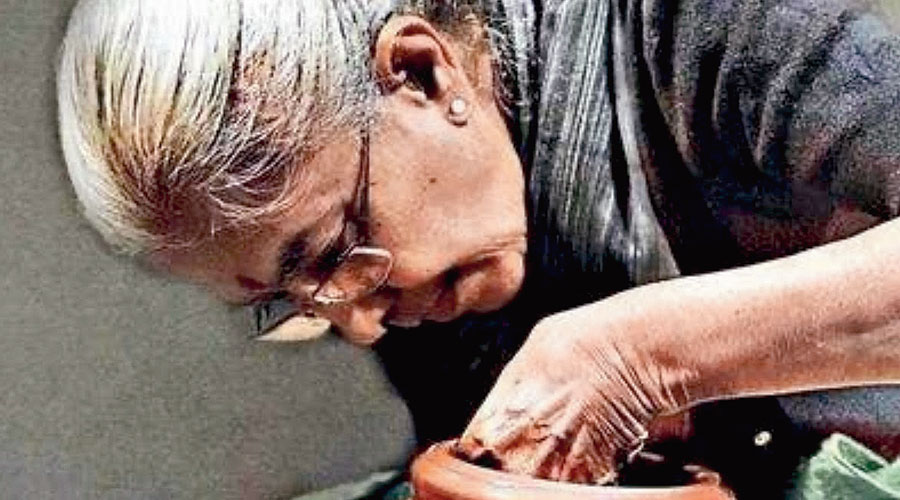 Jyotsna Bhatt, 80, leading ceramic artist, died on Saturday at her home in Baroda, where both she and her husband, artist Jyoti Bhatt, taught at MS University for years.

Having opted for sculpture, pottery was her secondary subject, but she fell in love with it and during the course of her 50-year-long career, she honed it to perfection. The couple led a life of exemplary simplicity and dignity as teachers and artists.

Jyotsna Bhatt was born in Kutch in 1940, and she shifted to Mumbai to join the J.J. School of Arts. That was in the late 1950s, but after a few months in Mumbai, she shifted to MS University. She concluded her training in sculpture under Sankho Chaudhuri.

Along with the mutating volumes, forms and shapes that stand out because of their simplicity and closeness to nature, the most striking aspect of Jyotsna Bhatt’s ceramics is the tactile quality and beauty of the mattes in teal or burnt terracotta. They have the texture and warmth of the finest tussar.

She said the methods of firing were multifarious, and a kiln fired with wood could impart beautiful colours. And one could leave it at that. It was complete in itself.

After Baroda, Jyotsna Bhatt continued her training at the Brooklyn Museum Art School. At the very beginning, she learnt making basic forms. By her own admission, she never created very large pieces, and even though her works vary in size, the larger ones are assemblages of smaller pieces done separately and later fitted together.

Her works come in many forms. The most beautiful ones are the “lotus buds” with flame-like petals conjoined at the tip like hands folded in prayer, the serene, spherical bowl-like shapes, platters that resemble striated cross-sections of tree trunks, pipes with flowers blooming along their rim, and hollow spherical bouquets that look like they were chiselled out of a single block of stone.

The mischievous cats lie in various attitudes of lassitude. The discs with what look like hands spread out at the centre or with perforations around them are multifarious in colour and texture. There is never a grand gesture. She did not hesitate to make small bowls, and she did not lose her sleep if she was charged with creating utilitarian objects.

The lotus buds are of indigenous origin, but the crowing roosters, tiny birds, fish and owls could be from anywhere in the world. They are more akin to painting than sculpture as they are in low relief. The texture is dependent on the selection of materials used, chemistry and firing in the kiln which she fine-tuned to achieve the effect she desired.

The rich mottled effects with a glowing aura were achieved with the various minerals that Jyotsna Bhatt played with.