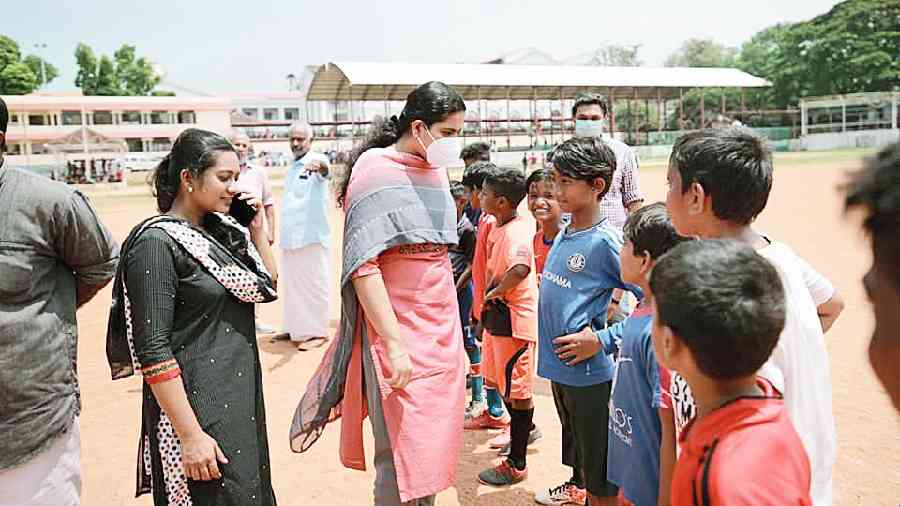 Arya Rajendran interacts with candidates at the trials to pick the city council’s sports teams in Thiruvananthapuram on June 30.
Facebook
K.M. Rakesh   |   Bangalore   |   Published 03.08.22, 01:14 AM

The International Olympic Committee in July 2021 added the word “Communiter” (together) to the Games motto Citius-Altius-Fortius, or Faster-Higher-Stronger. The amendment was a nod to the unifying power of sports and the importance of solidarity.

The municipal corporation in the Kerala capital does not appear to have got the message — it has created sports teams on the basis of caste. Ironically, the civic body is run by communists, whose avowed ideology has no place for caste or

The separate teams for the general category and Scheduled Castes-Scheduled Tribes have been formed on the watch of Arya Rajendran, who became the country’s youngest mayor when she took charge of the Thiruvananthapuram Municipal Corporation in December 2020 at age 21, bringing with her exuberance and hope.

The mayor’s announcement of the teams for boys and girls in football, volleyball, basketball, handball and athletics, all funded by the municipal corporation, has kicked up a storm in Kerala.

The idea is to enrol these teams in various tournaments in the state with the larger aim of promoting sports among youths, but it is not clear how caste-based teams will be able to take part in officially recognised tournaments when neither the Constitution nor the country’s laws have any room for such segregation.

Dalit groups and social media users have castigated the mayor for promoting the caste system.

under the “general” and “SC/ST” categories and that such classification helped better allocation of funds for more youngsters.

“It is sad that the corporation’s decision with the right intentions has been wrongly interpreted,” the mayor said in a statement posted on Facebook late on Monday.

“The Thiruvananthapuram corporation has for years been providing training in football, volleyball, basketball and athletics under the heads Kalari (general) and Kalari (SC) under the People’s Planning Project,” she said.

“These projects are run by utilising the general and SC/ST funds. It helps us to provide opportunities to more students by using these funds. Twenty-five players are picked for each team of boys and girls,” Arya added.

She claimed there was no discrimination as the players are trained together.

But the clarification did not help.

“She is now saying she inherited the caste-based system to choose sports teams. Being a young woman leader, that too from the CPM that claims to be anti-caste, she should have ideally ended that caste-based system… rather than pursue it,” Ammini Wayanad, the president of the Adivasi Vanitha Prasthanam, told The Telegraph on Tuesday.

Ammini ridiculed the argument that separate teams for general and SC/ST youths would enhance the opportunities for the deprived sections.

“Ultimately it is those with adequate financial resources who excel in sports in most cases. Of course, there are exceptions. But generally those from oppressed classes do not find a level playing field even in sports,” she said.

Ammini also drew attention to the danger of forming caste-based sports teams at a time when Kerala is witnessing a steady rise in caste sentiment.

“She (Arya) should have admitted the mistake and withdrawn the caste-based project instead of justifying it since we are going through a time when discrimination based on caste is on the rise even in progressive Kerala. I will be sending a memorandum to the state government to scrap this blatantly casteist project,” Ammini said.

The announcement made some recall the dehumanising caste system prevalent in Kerala that had prompted Swami Vivekananda to describe the state as a lunatic asylum. Kerala has since undergone radical social reform.