Advertisement
Home / India / BJP-Shiv Sena on road to power in Maharashtra, no clear winner in Haryana

BJP-Shiv Sena on road to power in Maharashtra, no clear winner in Haryana

With no clear winner in Haryana, Dushyant Chautala could well emerge kingmaker with his JJP leading in 10 seats. 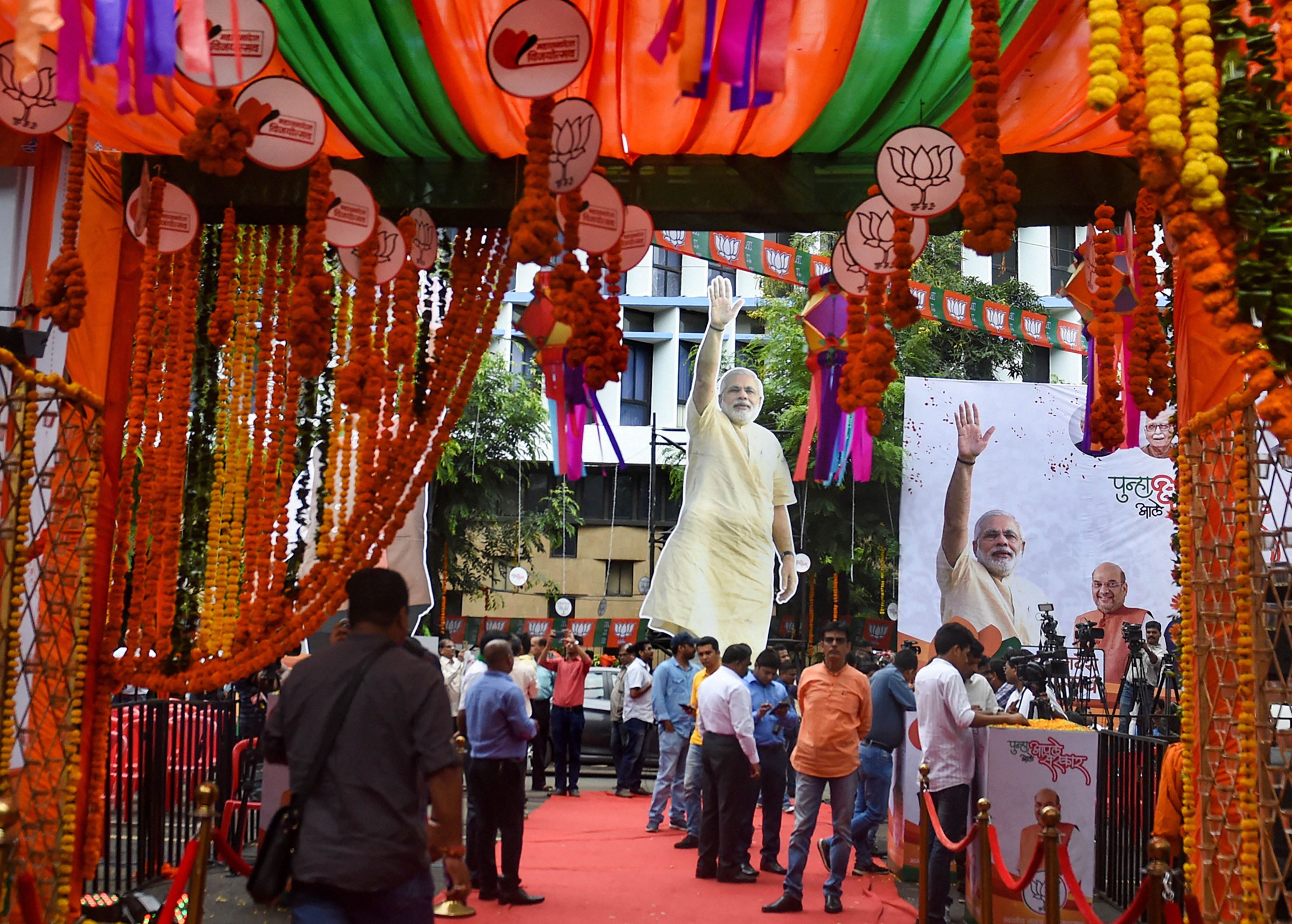 The BJP-Shiv Sena alliance was on the road to power in Maharashtra while Haryana emerged a cliffhanger with no clear majority for either the BJP or the Congress, Election Commission trends indicated as votes for the assembly polls held this week were counted on Thursday.

The BJP electoral juggernaut could have slowed down in the first Assembly elections since the party's triumph in the parliamentary polls this summer, the trends indicated.

While the BJP did not appear to be headed for the emphatic win it was expecting in the states it had ruled for five years, the Congress took a back seat to its partner NCP in Maharashtra but was poised to substantially better its tally in Haryana, according to the trends.

In Maharashtra, the BJP was hovering at the 100 mark with leads in 101 of the 288 seats and its partner Shiv Sena ahead in 64 seats. The Congress was leading in 37 seats, behind its ally Nationalist Congress Party that was ahead in 54 seats, the Sharad Pawar-led party faring way better than its parent party.

In 2014, when the BJP and the Shiv Sena fought elections separately in the western state, the BJP won 122 seats and the Sena 63. The Congress bagged 42 and the NCP 41.

As leads came in and the alliance between the two often fractious partners emerged victorious, Shiv Sena leader Sanjay Raut said the two parties will stick to the pre-decided '50-50' power sharing formula. He also ruled out the possibility of the Shiv Sena joining hands with the Opposition parties to form the government.

In Haryana, where BJP leader Manohar Lal Khattar is seeking a return to power, it looked like a hung assembly with no clear winners. The BJP was leading in 38 of the 90 seats and the Congress in 32.

In an electoral contest with no clear winner, Dushyant Chautala could well emerge kingmaker with his Jannayak Janta Party leading in 10 seats. The INLD was leading in two, Independents in six and the BSP in one.

Taking a swipe at the Bharatiya Janata Party's 'Mission 75,' Chautala said it would fall way short of its target of winning 75 seats.

Declaring that his party will hold the key to formation of the next dispensation, he told reporters, 'People of Haryana want change.'

Asked which party the JJP would support, he said, 'It's too early to say anything. We will first summon a meeting of our MLAs, decide who would be our leader in the House and then take it further.'

The people of Haryana had rejected the ruling BJP and was ready to 'embrace a new dawn of justice', state Congress chief Kumari Selja said.

'Haryana has given the verdict - it will not tolerate @BJP4Haryana's misgovernance any more. Choosing to leave behind the maladies inflicted on its people in last 5years,the state is ready to embrace a new dawn of justice & equality under the leadership of @INCHaryana,' Selja tweeted.

Both Khattar and his predecessor Bhupinder Singh Hooda of the Congress were among those who were leading from Karnal and Garhi Sampla-Kiloi, respectively, according to early trends.

In what appears to be a setback for the BJP, which placed considerable emphasis on Article 370, Jammu and Kashmir and other national issues in this campaign, seven of its ministers, assembly speaker and state party chief were seen trailing.

In 2014, the BJP won 47 seats and the Congress 15, with two Haryana Janhit Congress legislators later merging with it. The INLD had 19 seats and the Bahujan Samaj Party and the Shiromani Akali Dal one each. There were five Independents.