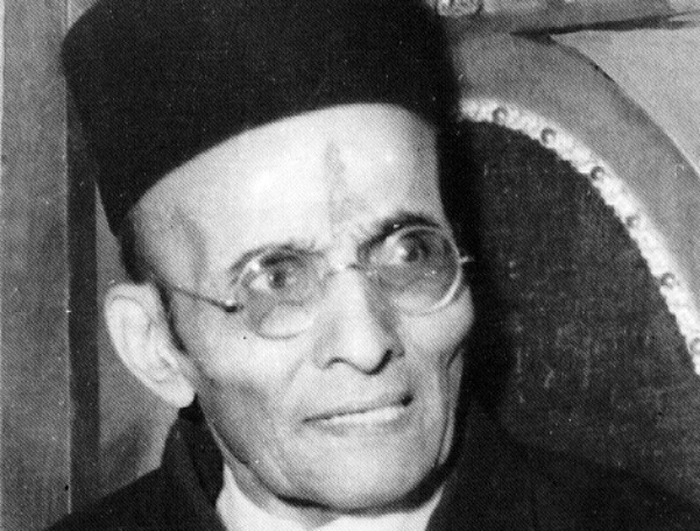 Savarkar, who codified “Hindutva” as a political philosophy, is remembered in Maharashtra as a freedom fighter. So by promising to honour him, the BJP hopes to make electoral gains as well as an ideological point.
Wikimedia Commons
Our Special Correspondent   |   New Delhi   |   Published 16.10.19, 12:06 AM

If the Economics Nobel for Abhijit Vinayak Banerjee has ruined the sleep of the self-styled Hindutva brigade, swift salvation has sprung up in Maharashtra.

Vinayak Damodar Savarkar will be proposed for the Bharat Ratna, the BJP announced on Tuesday in its manifesto for the upcoming Maharashtra Assembly polls.

Among the intellectual exploits of Savarkar was an abject mercy petition he made to the British. Savarkar also faced trial for Mahatma Gandhi’s assassination but was acquitted.

In the manifesto, the BJP said it would seek the country’s highest civilian honour for three persons from the state — the other two were social reformers Jyotiba Phule and Savitribai Phule.

The manifesto, released in Mumbai by BJP working president J.P. Nadda and chief minister Devendra Fadnavis, said the party would make efforts so that “Mahatma Phule, revolutionary Savitribai Phule and freedom fighter Veer Savarkar are felicitated with the Bharat Ratna”.

“Veer” is a prefix introduced by supporters of the Sangh parivar.

Savarkar’s choice was condemned by the Opposition, which asked if the next name would be that of Nathuram Godse, the Mahatma’s assassin and a follower of Savarkar.

CPI general secretary D. Raja was scathing. “This is the biggest irony of our times that while we are all celebrating the birth anniversary of Gandhiji, the BJP is seeking Bharat Ratna for Savarkar, who was an accused in his assassination case,” Raja said.

“The day may not be far off for the BJP to demand Bharat Ratna for Gandhiji’s assassin Nathuram Godse,” the CPI’s top leader added.

Savarkar, named a co-conspirator in the assassination, was let off for lack of sufficient evidence.

The commission headed by Justice Jivanlal Kapur of the Supreme Court was provided with evidence not produced in the court. It concluded: “All these facts taken together were destructive of any theory other than the conspiracy to murder by Savarkar and his group.” By the time the report came in 1969, Savarkar had died.

“If in the 150th birth anniversary year of Mahatma Gandhi the BJP wants Bharat Ratna for Savarkar, then God save this country,” Tiwari said.

Savarkar, who codified “Hindutva” as a political philosophy, is remembered in Maharashtra as a freedom fighter. So by promising to honour him, the BJP hopes to make electoral gains as well as an ideological point.

Savarkar’s confinement in the Cellular Jail at Port Blair is the subject of controversy, thanks to two petitions for mercy that he wrote to the British. In the second letter, written in 1913, “Veer” Savarkar wrote: “May I remind your honour to be so good as to go through the petition for clemency, that I had sent in 1911…. If the government in their manifold beneficence and mercy release me, I for one cannot but be the staunchest advocate of constitutional progress and loyalty to the English government….

“Moreover my conversion to the constitutional line would bring back all those misled young men in India and abroad who were once looking up to me as their guide. I am ready to serve the Government in any capacity they like….”

The BJP so far has not followed in the footsteps of Atal Bihari Vajpayee and proposed the Bharat Ratna for the Nobel laureate Vinayak, who has been trolled by some “Hindutva” proponents since Monday evening.

In 1999, a year after Amartya Sen was honoured with the Economics Nobel, the Vajpayee government had conferred the Bharat Ratna on the economist.