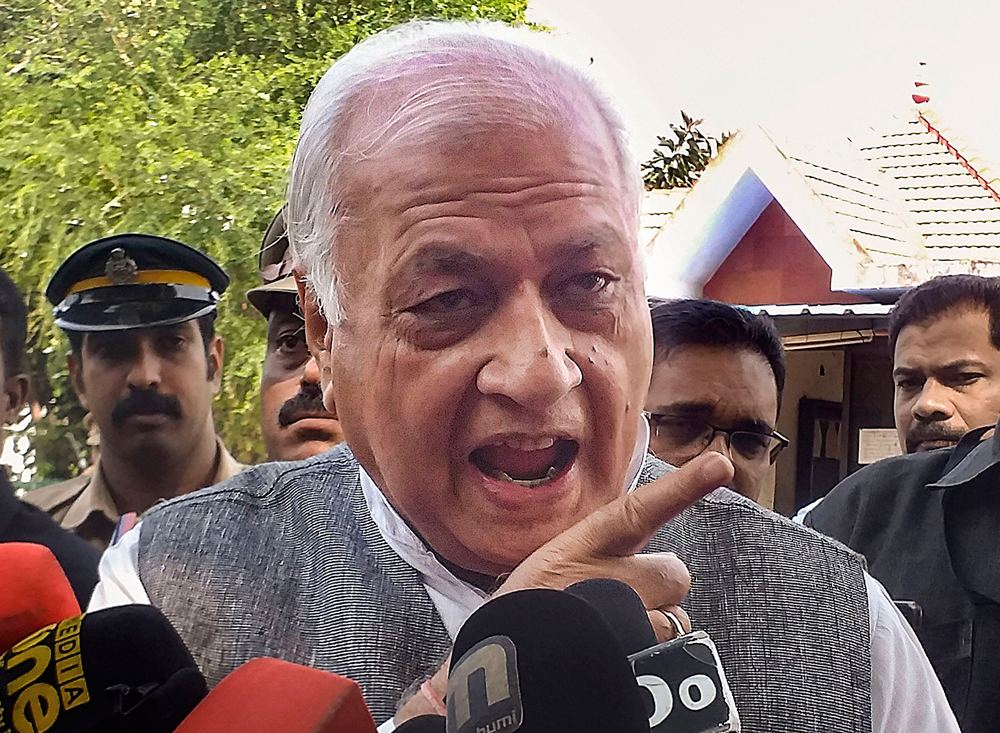 The lone BJP lawmaker in Left-ruled Kerala on Monday said neither the governor nor the chief minister should have gone public with their differences over the citizenship act, embarrassing his party in the middle of Raj Bhavan’s ongoing spat with the state government over the contentious law.

“Should they have aired their opinions so openly? There are so many channels for them to sort it out,” Rajagopal said. “Not just the governor, there were lapses on the part of the chief minister also.”

The governor has been sniping at the state government since the day Vijayan declared last month that Kerala would not implement the Citizenship (Amendment) Act and the National Register of Citizens.

On Monday, the CPM-led government formally said it would not carry out the exercise for a National Population Register but allow enumerators to conduct the census.

Khan had earlier said it was not for a state government to decide whether to enforce a central law, prompting Vijayan to remind the governor that India had a federal structure of governance that gave a state powers to act.

Then came a resolution the Assembly passed on New Year’s Eve seeking the withdrawal of the act. Khan said the resolution had no legal binding.

While the BJP has supported the governor, who assumed charge in September, Rajagopal is the party’s only leader who has said Khan’s statements have been improper.

Rajagopal made it clear he was speaking in his personal capacity. Political parties usually feel good when rivals get slammed, “but that’s not what I am for”, he said.

“As an MLA I wish for a model arrangement of governance between them,” he added. “The governor follows the Centre’s orders and in that we support him. But from the people’s point of view, it is pertinent that they solve this amicably.”

Asked if he would mediate between the two, Rajagopal appeared hesitant at first. “I don’t wish to mediate, as both of them are my friends,” he said but then added he wouldn’t mind brokering peace. “I have not taken a decision on mediating. But if an opportunity arises I will mediate,” he said.

It is the second time in 20 days that Rajagopal has put his party in a spot of bother. Rajagopal had not voted against the resolution and sat quietly, instead of raising his hands, when the Speaker asked who were opposing it.

He later clarified there was no point in opposing the resolution since everyone else was supporting it.

Rajagopal’s comments on Monday came a day after the governor sought a report on why the state government had not informed him before approaching the Supreme Court against the CAA.

Chief secretary Tom Jose called upon the governor during the day and sources said the bureaucrat told Khan the state government had no intention to keep him in the dark.

But the governor later made it clear he was not satisfied with the explanation at the closed-door meeting that lasted 20 minutes. “I made one thing clear, that going to the Supreme Court without informing me was not proper,” he said.

“The rules say it is mandatory for them to seek my approval. But, for arguments’ sake, I accept their view that only informing would do, they went to the Supreme Court without even informing me,” Khan said.

The state government hit back, with minister A.K. Balan challenging the governor to show why he should be informed before a state approached a court over a central law.

“Article 131 of the Constitution does not say the governor should be informed prior to approaching a court. There have been many instances when the state went to court against central laws without seeking prior approval or even informing the governor,” Balan told reporters in Thiruvananthapuram.