The BJP on Thursday rejected Rahul Gandhi's description of the demonetisation as a scam, saying he had "parroted" his past allegations and highlighting how the Congress had been "voted out in the people's court" in Uttar Pradesh and Gujarat. 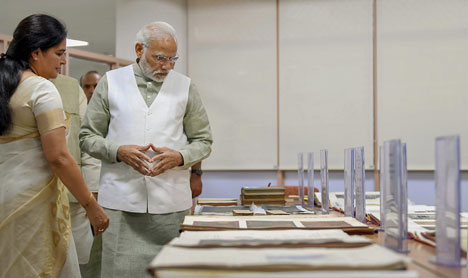 New Delhi: The BJP on Thursday rejected Rahul Gandhi's description of the demonetisation as a scam, saying he had "parroted" his past allegations and highlighting how the Congress had been "voted out in the people's court" in Uttar Pradesh and Gujarat.

"Rahul Gandhi appears a very non-serious political player. He repeated the things he had raised during the Uttar Pradesh polls. The result was seen by everybody. The Congress got just 7 seats," BJP spokesperson Sambit Patra said. "The best judges are the people in a democracy."

Patra also referred to Rahul's campaign against the demonetisation and the goods and services tax during the Gujarat polls. "Rahul termed the GST 'Gabbar Singh Tax' in Surat. What was the result? The BJP won all the 12 seats in Surat," Patra said.

He rejected Rahul's charge that 15 to 20 "crony capitalists" had benefited from the demonetisation, saying all of them were rich even during UPA rule. "Rahul Gandhi should name one corporate who has become rich post-2014," he said.

He slammed Rahul for shedding "blood tears" over the demonetisation, alleging the Congress and the Gandhi family had lost all their "ill-gotten" money because of the note recall.

"Little knowledge is dangerous. @RahulGandhi's fiction on 'demonetisation helping NPA holders' forgets that the Modi government legislated and enforced the IBC (Insolvency and Bankruptcy Code) where the NPA defaulters lost their companies," he tweeted.

Jaitley also wrote a blog to counter the charge that the demonetisation had failed in its objectives with most of the demonetised currency notes coming back to the banks.

Jaitley repeated arguments he had made several times in the past, claiming the note recall had been a huge success since it had formalised the economy by drawing all anonymous money into the banks.

"When cash is deposited in the banks, the anonymity about the owner of the cash disappears. The deposited cash is identified with its owner, giving rise to an inquiry whether the amount deposited is in consonance with the depositor's income," he wrote, arguing the return of the demonetised notes into the banks was a success.

"Accordingly, post-demonetisation, about 1.8 million depositors have been identified with tax penalties. Mere deposit of cash in a bank does not lead to a presumption that it is tax-paid money."