Advertisement
Home / India / Bihar: There is no freedom to speak in Parliament, says Lalu Prasad

Bihar: There is no freedom to speak in Parliament, says Lalu Prasad 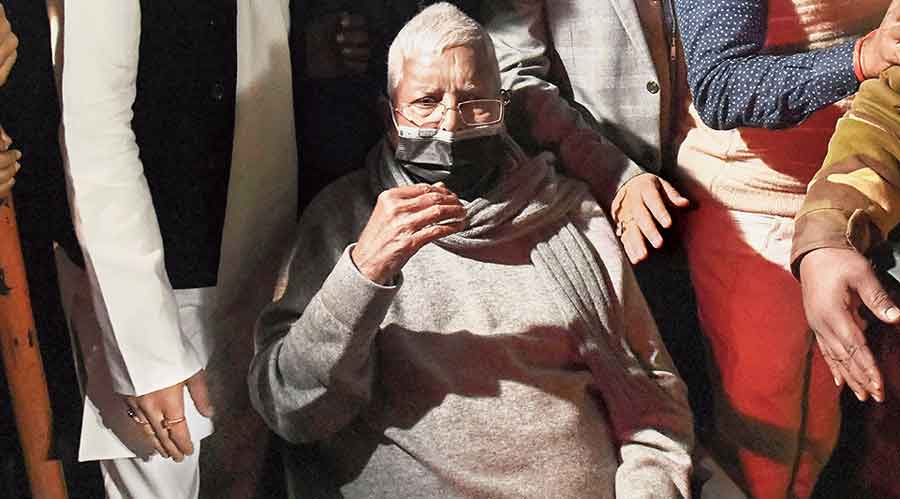 Rashtriya Janata Dal (RJD) chief Lalu Prasad on Tuesday expressed his willingness to return to active politics because it was unbearable for him to silently watch where Parliament was headed.

He also predicted the rout of the BJP in the Uttar Pradesh Assembly elections and hit out at Bihar chief minister Nitish Kumar for sticking with the party despite the state being denied the special category status.

“I see (on TV) the proceedings going on in Parliament. It is not functioning in the real sense. There is no freedom or liberty to speak there. It is unbearable to watch where it is headed,” RJD chief Lalu Prasad told reporters before leaving for Patna.

“I will definitely contest the Lok Sabha elections. Right now there are some court restrictions. I will remove them and surely contest the polls in future,” Lalu added.

Asserting that the people of the country wanted to “get rid of the lies being spread by the BJP”, the RJD chief said: “Just wait and watch. The BJP will bite dust in Uttar Pradesh Assembly elections.”

Lalu will attend his party’s national executive in Patna on Thursday and later launch a membership drive of the party. “We will discuss the present political situation in our country and Bihar and chalk out a strategy to deal with it,” Lalu said.

Not sparing chief minister Nitish Kumar on the occasion, Lalu pointed out that he went with the BJP on the pretext that it would provide special category status to Bihar, but nothing happened.

“The BJP has denied special category status to Bihar, despite committing to provide it. They are obstinate and give various excuses for it. Yet, Nitish is still sticking with it. Other states got special status, but our state did not. People rightly say that Nitish will shake hands with anybody for the sake of power,” Lalu said.

The RJD chief asserted that the Railway Recruitment Board (RRB) did gross injustice to the candidates who appeared in the non-technical popular categories examination and “committed a fraud in the results”.

Lalu, during his visit to Patna, is expected to release the names of candidates for the polls to 24 vacant seats of the Legislative Council. The RJD and its ally Congress are going separate ways in the elections and will contest on their own.

“Our alliance with the Congress is on the national level. There are no issues between us,” the RJD chief said when asked about the alliance for the MLC polls.

He will also appear before the CBI court in Ranchi on February 15 in a fodder scam case pertaining to alleged fraudulent withdrawal of money from the Doranda treasury.

Lalu is currently out on bail in four other cases pertaining to the Rs 1,000-crore fodder scam in undivided Bihar (which included Jharkhand). He is also suffering from diabetes, heart and kidney ailments.

The RJD chief was disqualified from his Lok Sabha membership in 2013 after being convicted in the first fodder scam case. In the present scenario, he can contest elections six years after the term of his conviction in all cases end.

“Laluji has moved Jharkhand High Court against his conviction. He can contest the polls if it is set aside,” RJD spokesperson Chitranjan Gagan told The Telegraph.

Gagan said the RJD chief would preside over the national executive, which would finalise the dates of the organisational elections that needed to be held every three years. Lalu’s term as the party president ends in December this year.

“Laluji will also launch a membership drive after the national executive. The existing 86 lakh primary members of the party need to renew their membership while new members will also be added. The RJD charges Rs 5 as membership fee,” Gagan said.