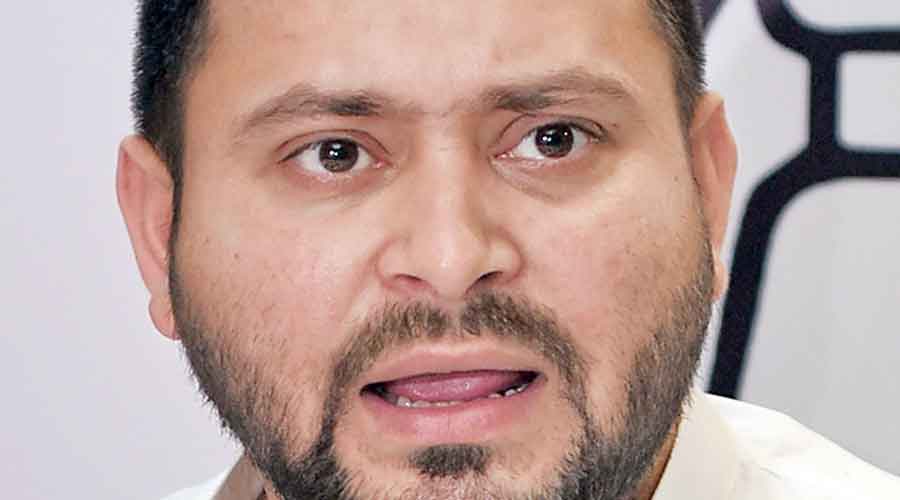 Leshi is a member of Nitish’s Janata Dal United and an MLA from the Dhamdaha constituency in Purnea district. Purnea zila parishad member Anulika Singh has accused her of conspiring to get her husband Vishwajit Singh alias Rintu Singh killed on Friday as he was emerging as a challenge to her (Lesi) in the area.

“Bihar is witnessing ‘maha jungle raj’. There is the fearsome noise of rape, loot, and murder everywhere in the state. Corruption is at its zenith due to the administrative anarchy here. Rintu Singh had submitted a written complaint to the police that his life was in danger due to Leshi Singh and her nephew, but no FIR was registered nor any security was provided to him. She should resign from her post,” Tejashwi said.

The younger son of the Rashtriya Janata Dal (RJD) chief Lalu Prasad was speaking while interacting with the media at the party headquarters in Patna. He said that over 65 people have died in hooch tragedies in the past 15 days, while more than 500 businessmen have been killed in the state in the past one year.

Tejashwi attacked the very foundation of Nitish, who came to power in 2005 riding an overwhelming mandate by the public in favour of restoring law and order in the state.

The RJD leader also focused on the murder of independent journalist and RTI activist Buddhinath Jha a.k.a. Avinash Jha at Benipatti in Madhubani district for raising voice against the wrongdoings of private hospitals in the area.

“Everybody believes that Jha has been killed by people having connections in the government for raising his voice against the hospital mafia. Similarly, a nephew of former Bihar minister Raghunath Jha was shot dead four days ago. A girl student died in police custody in Motihari in East Champaran district. A 23-year-old was gangraped during the Chhath Puja in Nitish’s native Nalanda district,” Tejashwi added.

Continuing, Tejashwi, who had a brief stint as a deputy chief minister in the Nitish-led Grand Alliance government between 2015 and 2017, pointed out how West Champaran zila parishad member Dayanand Verma was killed and his wife has been accusing JDU MLA from Valmikinagar constituency Dhirendra Pratap Singh without any action by the police. She even went to Nitish’s ‘Janata Durbar’ but nothing happened.

“Another JDU MLA from Kuchaikot constituency, Amarendra Pandey alias Pappu Pandey and his brother have murdered many people. Nitish Kumar specialises in patronising history-sheeters. If he cannot keep his murderous MLAs and ministers in control, then how will Bihar police control crime and liquor mafia,” Tejashwi asked.

The RJD leader also asked Nitish to understand that he and his government have been elected by the people to serve, provide security and ensure developmental works instead of shirking the responsibilities and indulging in the luxury of power.

Reacting to Tejashwi’s charges, JDU national president Rajiv Ranjan Singh a.k.a Lalan Singh said that he was the leader of Opposition and his work was to keep accusing the government for everything.

“Rule of the law is enforced in Bihar. The police are investigating all the cases. Nobody is saved or implicated by Nitish Kumar’s government. It used to be done during the regime of Tejashwi’s parents — Lalu and Rabri Devi,” Lalan said.

Meanwhile, Leshi came out to defend herself in the light of Tejashwi’s statements.

“The police in Bihar are independent. I will be punished if I am involved in any crime. My name is being maligned by vested interests,” Leshi said.