The state's largest minority community has held key ministerial and other constitutional posts whether under the rule of Congress, Samyukta Socialist Party, Janata Party, Janata Dal or the RJD 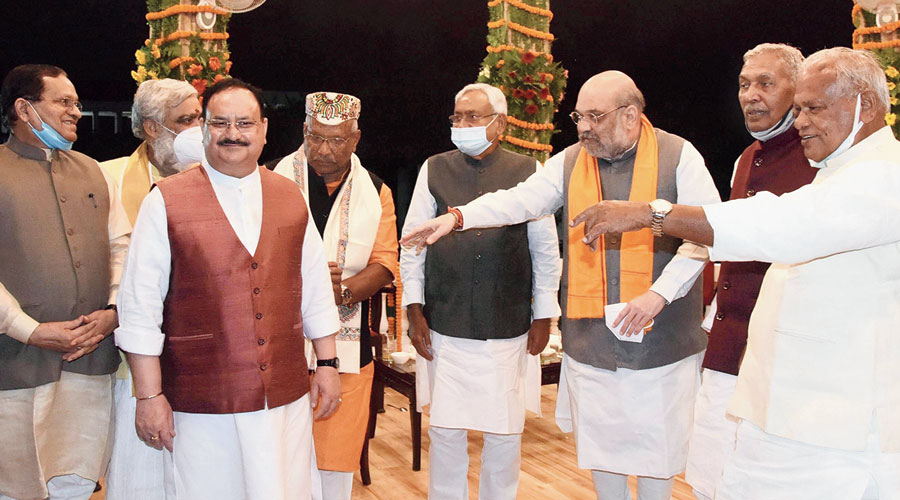 Bihar has for the first time since Independence got a ruling coalition without a single MLA from its largest minority community.

None of the four parties in the National Democratic Alliance — the BJP, Janata Dal United, Hindustani Awam Morcha Secular and Vikassheel Insan Party — has a single MLA from among Muslims, who make up over 16 per cent of the state's population.

Of these four, the JDU alone had fielded Muslim candidates, all 11 of whom lost.

Nitish Kumar, who on Monday took oath as chief minister for the seventh time and who flaunts his “socialist-secular” credentials, will therefore have to form a council of ministers without a single Muslim member elected directly by the people.

He has, of course, the option of engaging in the “tokenism” of appointing a Muslim minister and then nominating them to the state legislative council.

All the non-NDA parties or combines that have won seats — apart from the Lok Janshakti Party — have their share of Muslim MLAs. The Rashtriya Janata Dal has 8 Muslims among its 75 MLAs, the Congress has 4 out of 19, Asaduddin Owaisi’s AIMIM has 5 out of 5, and the Left parties have 1 out of 16. The Bahujan Samaj Party’s lone MLA is a Muslim.

Veteran socialist leader Shivanand Tiwary, who has worked with both Lalu Prasad and Nitish for over 40 years, put in perspective the loss of the JDU’s Muslim candidates despite their party’s origin and upbringing in Bihar’s socialist tradition.

He referred to developments at some of the joint campaign meetings held by Nitish and Prime Minister Narendra Modi in the Seemanchal and Mithila areas.

“Nitish remained a silent spectator to Modi shouting ‘Jai Sri Ram’ and demonstrating his ‘victory’ in (amending) Article 370 in Jammu and Kashmir to polarise the voters on communal lines from the dais,” he said.

“Faced with anger and anti-incumbency, Nitish’s JDU banked on the benefits of the polarisation that the speeches by the Prime Minister and Uttar Pradesh chief minister Adityanath delivered. Obviously, the minorities found the BJP and the JDU to be on the same page and didn’t vote for his candidates.”

Yet the JDU is in no way similar to the BJP in terms of origin, growth or larger ideology. Abdul Ghafoor, who was Bihar chief minister in the 1970s, was one of the founders of the Samata Party, from which the JDU was born in 1999.

Socialist stalwart George Fernandes, a Christian from Mangalore, had been chief of Samata and later the JDU. When Samata struck an alliance with the BJP in 1996, it had recorded its reservations about the BJP’s agenda of repealing Article 370, introducing a uniform civil code and building a Ram temple on the disputed plot in Ayodhya.

Muslims have held key ministerial and other constitutional posts ever since the first Assembly elections in Bihar in 1952, whether under the rule of the Congress, Samyukta Socialist Party, Janata Party, Janata Dal or the RJD —  even under the BJP-JDU alliance headed by Nitish until the latest election.

From a larger perspective, the community has played a key role in Bihar’s history over the centuries. The road leading to Patna airport is named Peer Ali Marg after a hero of the 1857 revolt.

Socialist revolutionary Taqi Rahim was the right-hand man of Jayaprakash Narayan who led the 1970s movement from Bihar that led to Indira Gandhi’s Congress losing power at the Centre in the post-Emergency 1977 election.

Muslims have presided over both Houses in Bihar. Ghulam Sarwar was Speaker of the Assembly during Lalu Prasad’s first term as chief minister and Jabir Hussein was chairperson of the legislative council during the later years of RJD rule.

“While Nitish is on the verge of creating history by logging the longest tenure as Bihar chief minister after Sri Krishna Sinha, he will also go down in history as the one who led a coalition without a single Muslim MLA,” Shivanand said.

“He (Nitish) has actually achieved the larger goal of the RSS to relegate the minorities to second-class citizens and deny them representation in political governance.”

When Nitish led the Mahagathbandhan of the JDU, RJD and the Congress to power in 2015, his cabinet had the prominent Muslim face, Abdul Bari Siddiqui, from the RJD as finance minister.

After Nitish returned to the BJP in 2017, he had Khurshid Feroz, a JDU lawmaker from Sikta, in his council of ministers. Khurshid was known for chanting "Jai Sri Ram" and donning saffron.

Nitish has also had to accept the BJP central leadership's decision of replacing Sushil Kumar Modi with Tarkishore Prasad and Renu Devi as deputy chief ministers.

Sushil, one of the last stalwarts from the Atal Bihari Vajpayee-L.K. Advani era, had stuck with Nitish throughout his career as BJP-JDU chief minister -- even at the cost of angering the Hindutva hardliners in his own party.

Tarkishore represents the politics of polarisation and is the MLA from Katihar, which has a large Muslim population and borders election-bound Bengal.

“Nitish’s oft-repeated motto of observing the triple Cs -- that is, a policy of no compromise with communalism, crime or corruption -- now sounds like a joke,” D.M. Diwakar, social economist and professor at the AN Sinha Institute of Social Sciences, said.

"The results of this election have proved beyond doubt that the BJP, which bears the signature of Narendra Modi and Amit Shah, has thoroughly subsumed Nitish’s JDU.”

Nalin Verma is a veteran journalist and media educator