Advertisement
Home / India / Battle of tents and banners on border

Battle of tents and banners on border 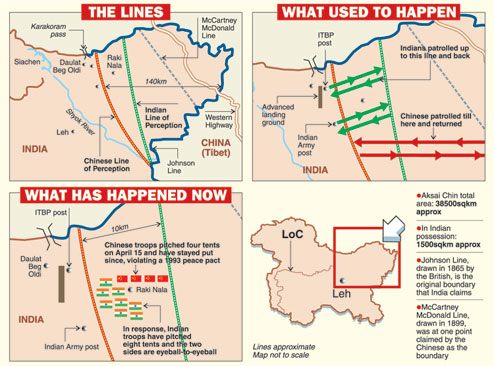 New Delhi, April 25: The India-China military face-off in eastern Ladakh has turned into a battle of tentwallahs on a Tibetan plateau.

The Indian Army chief, General Bikram Singh, who returned from Jammu and Kashmir last evening, told a group of military veterans in a closed-door meeting today that the army has pitched eight tents in response to four pitched by the Chinese between the “Lines of Perception” on a dry bed of a rivulet called Raki Nala.

The Chinese move on April 15 and the Indian response has essentially reinforced the policy of “finders keepers” on the undemarcated and disputed common boundaries between the two countries, one officer who attended the meeting told The Telegraph.

The “Lines of Perception” are the notional boundaries till which the troops of either side patrol. The Chinese “Line of Perception” is between 10km and 12km west of the Indian line.

The army chief, who briefed defence minister A.K. Antony and the China Study Group headed by national security adviser Shiv Shankar Menon on his assessment of the situation, is also understood to have told the veterans — many of whom retired as senior officers who served in the area — that the government had advised the army not to provoke a situation that could disrupt diplomatic efforts for a resolution.

He said India would try to keep the dispute “localised” and “tactical” to give diplomatic processes more space as New Delhi prepares to welcome the new Chinese Premier, Li Keqiang, on his maiden foreign visit on May 20. On May 9, foreign minister Salman Khurshid is to visit China.

There have been two flag-meetings at Spanggur Gap between the Indian and Chinese armies. Both were requested by India. Now China has requested for a third today.

But there was an acknowledgement that by pitching tents and staying put for 10 days, the Chinese had violated the rules framed under the 1993 agreement of peace and tranquillity on the Line of Actual Control (LAC).

While the troops are eyeball-to-eyeball at Raki Nala, there has been no firing but each side has held up banners advising the other to vacate the space.

The government also does not immediately favour military moves that may be interpreted as “offensive” by the Chinese. This effectively rules out outflanking manoeuvres that may have been used by the Indian Army to set up a camp behind the Chinese one. It also pushes into the background a build-up of forces.

In 1986, after the Chinese had moved into Sumdorong Chhu, a valley in Arunachal Pradesh, then army chief, General Sundarji ordered Operation Falcon with the government’s nod. Two divisions of the army were airlifted and they occupied high points around Sumdorong Chhu, threatening the Chinese. That led to a “loudspeaker war” — each side warning the other over loudspeaker announcements — that ended in 1987. But it was not till 1995 — nine years after occupying it — that the Chinese vacated Sumdorong Chhu.

A similar long-drawn-out standoff is on the cards in the Daulat Beg Oldi sector unless one or the other side decides to break the stalemate that is now 10 days old since the Chinese set up camp — and altered the status quo — on April 15.

Indian military observers say the Chinese enjoy a military advantage in Sub Sector North (SSN) — as the Leh-headquartered 14 Corps has designated the zone around Daulat Beg Oldi. The area is upwards of 16,000 feet above the Shyok River Valley that is to its west.

But from the Chinese side, the plateau and the Depsang Plains on the edge of which is Raki Nala are more easily accessible. The entire area is motorable because it is flat. Helicopters can land easily. While the Chinese army can roll down the plains from the Western Highway that links Xinjiang and Tibet, Indian troops would have to be airlifted, an exercise that will be a slow process because of the high altitude rarefied atmosphere.

It would take at least a three-day march for a company of troops to reach Daulat Beg Oldi from Sasoma in the Shyok Valley. The Indian Air Force began using an Advanced Landing Ground (ALG) in DBO from 2008. But the An 32 and (newly-acquired US-made) C130J Hercules aircraft cannot land and take off at DBO with maximum payload at that height. An IAF source said the last landing by a fixed-wing aircraft at DBO was nearly a year ago.

A request by the army in 1999, and repeated since then, to make the ITBP units in the Ladakh sector report to the 3 Infantry Division (headquartered in Leh) has been ignored. The upshot is that while the ITBP reports to the home ministry, the army is responsible overall for the defence of Ladakh. This has resulted in a communication gap, says one officer.

The main Daulat Beg Oldi post, about 16km from the Karakoram pass, is maintained by the army. The distance between Bush Area and Track Junction is about 9km.

The communication gap has made an already fuzzy situation even more confusing for Indian security forces. There are at least four different notional boundaries in this area known as Aksai Chin. While the depth of the April 15 Chinese “incursion” is 10km from the Indian “Line of Perception”, its distance from the original boundary (Johnson Line) that India claims since the British left is about 140km.

The truth is India has never been in actual military possession of the entire area that is about 38,500 square kilometres. Today, it can show possession of just about 1,500sqkm.

While the area has almost no civilian population — barring a few shepherd and nomadic communities — it is of strategic importance to both India and China. China’s Western Highway linking Xinjiang with Tibet passes through the “bulge” and it needs the 60km or so westward of the road to give it strategic depth.

The 1962 war in which Indian forces got a drubbing began with hostilities in this sector. Even in 1999, during the Kargil war with Pakistan, Chinese forces had made a foray near the Chip Chap River in this sector. At the time Prime Minister Vajpayee’s government chose not to make an issue of it.