Untamed protesters and combative minister land varsity in a mess, restless governor tries to clean it up, vandals chant ‘Jai Shri Ram’ and play with fire 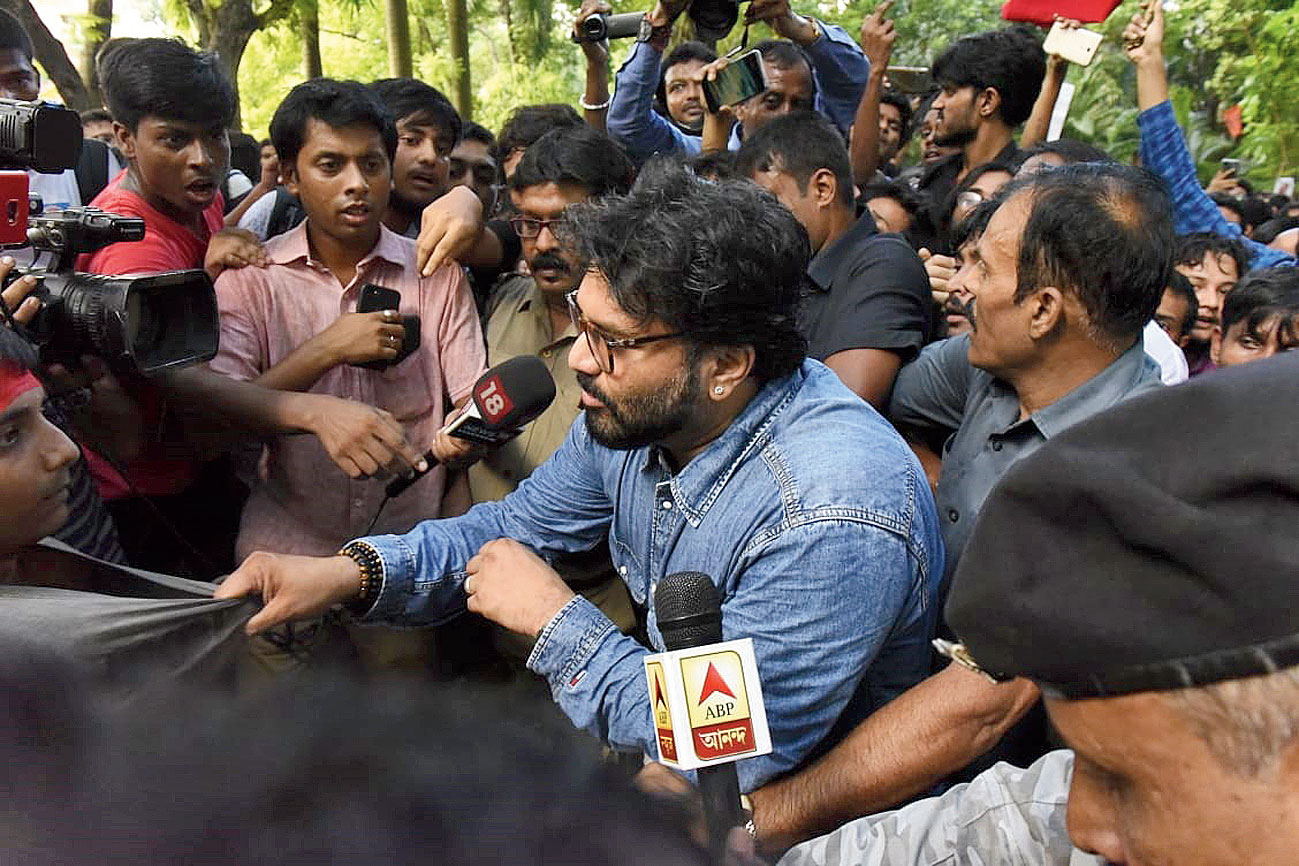 Hundreds of students barricaded Union minister Babul Supriyo at Jadavpur University for over five hours on Thursday when he arrived to attend an ABVP programme, before governor Jagdeep Dhankhar drove to the campus and rescued him.

The confrontation between Left-leaning students and the combative minister had the hallmark of campus brawls but the issues at heart went far beyond the confines of the varsity.

The students insisted that they would not let in someone representing “fascist” forces and specifically cited the BJP’s support for the National Register of Citizens (NRC), which has been finalised in Assam and which the Narendra Modi government has vowed to extend across the country.

Elements of the majoritarian narrative witnessed elsewhere in the country crept up on the campus later in the day: a local BJP leader posted pictures of ABVP supporters painting graffiti on the walls of JU’s SFI-run arts faculty students’ union room and “purifying” it with the name of the ABVP.

Near a gate of the varsity, suspected Sangh parivar supporters set on fire bicycles and banners, chanting “Jai Shri Ram”. The scenes were reminiscent of the Vidyasagar bust vandalism that took place just before the Lok Sabha polls.

By nightfall on Thursday, the campus clash had snowballed into a full-fledged political battle with the ruling Trinamul Congress accusing the governor of going to JU to “help” the BJP. (See statement below)

During the afternoon-to-night standoff, Supriyo said he was kicked and scratched. The junior environment minister’s hair was pulled in the melee.

When matters went out of hand, Supriyo, who had reached the campus to attend the ABVP event as a singer, shouted at vice-chancellor Suranjan Das: “You are a Leftist”.

Footage shows arson at Gate No. 4 of Jadavpur University by suspected supporters of the Sangh parivar, several of whom were shouting “Jai Shri Ram”

The minister asked the VC to call police. But Das did not budge from his stated policy of not calling the police into the campus and said he would rather resign. An official quoted Supriyo as saying “then you should resign”.

Governor Dhankhar, the chancellor of JU, arrived with a posse of policemen, mostly in plainclothes, around 7pm. The security personnel formed a ring as Dhankhar walked up to Supriyo, the junior environment minister, and led him by the hand to his car.

But the protesting students blocked the car, which could leave only around 8.10pm after some teachers intervened.

“Sangeetshilpi (singer) Babul Supriyo” was the chief guest at the panel discussion and freshers’ welcome the RSS student arm had organised at the K.P. Basu Memorial Hall. The SFI had called for a boycott of the event in protest at “fascism”.

Supriyo’s car entered the campus through Gate No. 3 around 2.45pm, to be confronted by a few hundred protesters chanting “go back” and waving black flags.

Fashion designer Agnimitra Paul, a recent BJP recruit, was among the invitees and had arrived before Supriyo. She was allegedly heckled by students who “tried to pull my sari”.

As Supriyo got off his car and walked towards the venue a few hundred yards away, escorted by a few students, others chanted slogans blaming him for the recent Asansol violence and vowing not to allow the NRC exercise in Bengal.

He tried to talk to the agitators but was told to get off the campus. Some students squatted in front of him, blocking his way. “Your party is trying to stoke trouble with the NRC; we’ll never allow this in Bengal,” said a student.

Supriyo lost his cool when a protester pulled him by the hair. “Debate the NRC if you want but why are you hitting me? I’d performed at a fest here in 1989. Jadavpur was not like this.”

The students alleged it was Supriyo who kept provoking them. The minister’s gun-wielding guards cordoned him but could not prevent stray “attacks”. Some students asked why he had come to a university with armed personnel.

Vice-chancellor Das arrived around 3pm. “I’ll take you to the venue when things settle down,” he promised Supriyo, addressing him as “Mr Minister”. The Asansol MP refused, saying he was not a “coward”.

After two attempts, around 4.05pm, the minister managed to enter the hall, protected by a safe corridor formed by his security guards. Inside, he thanked the ABVP for “not responding to provocation” and delivered a speech.

Supriyo walked out around 5.10pm, only to step into another protest by a now swollen crowd. “My ego is getting hurt,” he said a little later and walked towards his car. The protesters alleged highhandedness by the minister’s guards and demanded an apology from him.

At one point, as the students sang We Shall Overcome, Supriyo was seen leaning on his car and clapping. He told the protesters: “This is your problem. Democracy is good with a vocal Opposition but here, you are not letting me speak.”

Dhankhar arrived through Gate No. 4, got off his car and tried walking the 100 metres to where Supriyo was. But at least 100 students stood in between, forcing Dhankhar to return to his car after issuing a few instructions to his security.

After the guards and the police formed a safe passage, enabling the governor to lead Supriyo to his car, they were stuck inside for over an hour as students squatted in front. Some banged on the bonnet.

When the teachers’ intervention ended the standoff, the security personnel had to form another safe corridor so the car could leave through Gate No. 3.