Advertisement
Home / India / B, B, B… Bihar poll, not Bully Beijing
Address to the nation delivers PIB release

B, B, B… Bihar poll, not Bully Beijing

Modi does not even hint at the crisis on the border, let alone mention China by name 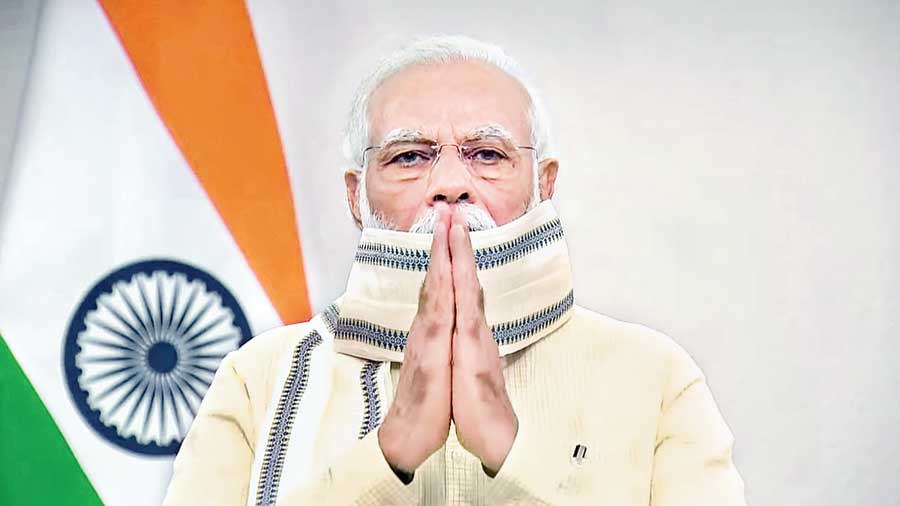 “Saathiyon, today, I am making a big announcement….”

If the nation moved to the edge of the seat and braced for a demonetisation-style strike on Tuesday afternoon, it needn’t have done so because that momentous announcement had begun with the fateful — and now forgotten — “mitron”, not “saathiyon”.

On Tuesday afternoon, Prime Minister Narendra Modi continued his address to the nation, building up the suspense through a 459-word introduction and then coming to the “big announcement” but only after a long lesson in the Hindu almanac.

“Friends, in our country, there are many activities in agriculture during and after the rainy season. Other sectors do not have much activity. July also marks the beginning of the festive season. 5th July is Guru Purnima, then the month of Saawan is starting. Then 15th August is coming, Raksha Bandhan, Sri Krishna Janmashtami, Ganesh Chaturthi, Onam will follow. Further, Kati Bihu, Navratri, Durga Puja is coming, then Dussera, Diwali and Chhath. This festive season increases necessities as well as expenditure. Keeping all these things in mind, it has been decided to extend Pradhan Mantri Garib Kalyan Anna Yojana up to Diwali and Chhath Puja, till November-end,” Modi told a nation holding its breath.

Cut to the chase, this is what Modi said:

The three bullet points above were among the five uploaded on the website of the Press Information Bureau (PIB), the publicity wing of the Union government.

Why the PIB, which is not short of talent and whose job is to issue such statements, made the Prime Minister do its hard work is not clear. The operative content of the 16-minute address could easily have been issued through a brief statement.

Instead, the suspense over the 4pm address was fed from Monday night itself.

One clue to the possible reason for the address lay in the abrupt end of festivals listed by Modi: “Chhath Puja, till November-end.” No mention of Id-ul-Zoha, which falls in July, or of Christmas, less than a month away from November-end.

November is also the month when the Bihar Assembly elections are due although the schedule can be affected by the pandemic fallout.

Migrant workers have been among the sections worst affected by the lockdown. Officially, around 18 lakh migrants have returned to Bihar during the lockdown.

In the address to the nation, the Prime Minister did not launch any new scheme. He merely extended it but spared no effort to drive home the message, which meant another calendar lesson followed.

Modi did not extend the magnanimity to the Opposition by sharing credit. The demand for free food grain for the poor was first raised in March by Congress president Sonia Gandhi, who has repeated it again and again since. The Congress has also been calling for cash transfer of Rs 7,500 per month to each poor family.

After the Prime Minister’s 960-word address peppered with 10 “saathiyon”, the saffron brigade flooded social media platforms with the hashtag “ModiCARES4Poor”.

Modi did not even hint at the crisis on the border, let alone mention China by name.