'The trust bought the land originally valued at Rs 2 crore for Rs 18.5 crore and Rs 8 crore since it was sold in two lots, which totals Rs 26.5 crore' 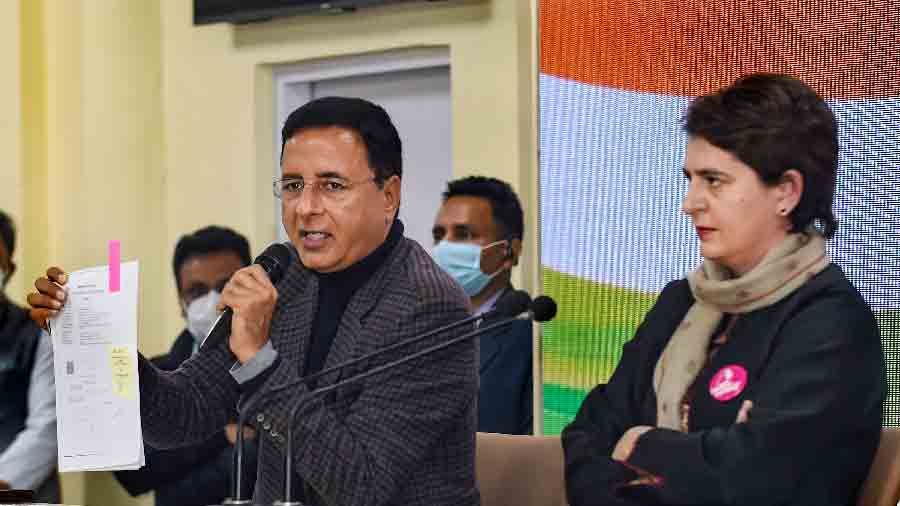 Congress leader Priyanka Gandhi Vadra Thursday dismissed as an eyewash the probe ordered by the Uttar Pradesh government into the Ayodhya land "scam" and urged the Supreme Court to intervene.

She said that by indulging in "corruption" BJP leaders and officials have hurt the faith of people who donated for the construction of the Ram Temple.

Addressing a press conference here, she said the Supreme Court should take suo motu cognisance of the matter as the Ram Temple in Ayodhya is being built following its order.

BJP leaders have "sold the sentiments, faith and religion" by indulging in loot and misuse of donations received for the Ram Temple, she charged.

The Ram Temple Trust's money is being "misused to benefit" BJP, RSS and trust members, she alleged, adding land belonging to Dalits which is not allowed to be sold is also being "usurped" and illegally bought by officials and their relatives.

She alleged the misuse of Rs 30 crore worth of Trust's money donated by the poor and common people. She also shared the details of purported registered land deeds related to the Ram temple in Ayodhya.

"The prime minister and the chief minister are trying to save those who have indulged in theft of donations for the Ram Temple. As per the registered land deeds, there is a 1300 percent rise in land price within five minutes. The massive corruption in Trust money is very clear, she alleged.

There is wholesale corruption happening.

A news report has claimed that MLAs, mayors, relatives of the commissioner, SDM and DIG bought land in Ayodhya after the Supreme Court announced the verdict in the Ramjanmabhoomi-Babri Masjid dispute, clearing the way for construction of the Ram temple.

The state government has ordered a probe into the matter.

But Vadra dismissed the probe ordered by the BJP government.

It is clear that no real inquiry is going to take place as a district level official is probing the matter, even when big people like the mayor and BJP MLAs are involved. We do not expect any inquiry to take place and the inquiry should be done by the Supreme Court," she said.

Asked if the inquiry by district officials is merely an eyewash, she said, "It is, absolutely. That is my view."

"In my view the court should suo motu intervene as we are talking about the faith of millions, including poor people who have given their savings to the Trust. It is some moral responsibility -- owed to them. It is very clear that the officer of that level cannot investigate the mayor of Ayodhya," she said.

Vadra named the mayor of Ayodhya Rishikesh Upadhyay and his nephew, besides trustee Anil Mishra and Champat Rai, the secretary of the Ram temple Trust in the land deals.

"The moral responsibility on these donations, given out of faith, is of the prime minister and the chief minister. You cannot hurt the faith of people," she said.

Mentioning the October 3 Lakhimpur violence during a farmers' protest in which Union minister Ajay Mishra's son is the main accused, she said, "The father of the accused is a minister and he is not sacked and no official can probe this."

"Here too, no official will probe as the mayor is a signatory to the land deed. This shows the mindset of the government. Whenever such a crime or corruption takes place, they do not want a true and fair probe, because they all know the truth and probably they are part of it too," she said.

Asked if the Congress will move court in this regard, she said a decision will be taken after consultations.

Congress general secretary and chief spokesperson Randeep Surjewala said Vadra is already fighting the battle in the people's court and a decision on whether to move court will be taken after discussions within the party. "Forgive me for saying, at times, the people's court is bigger than the court of law."

"Property dealers and BJP leaders are indulging in the loot of public money in the name of Lord Ram in Ayodhya," he said.