5 missing in tragedy at pass, which connects Leh with Siachen glacier 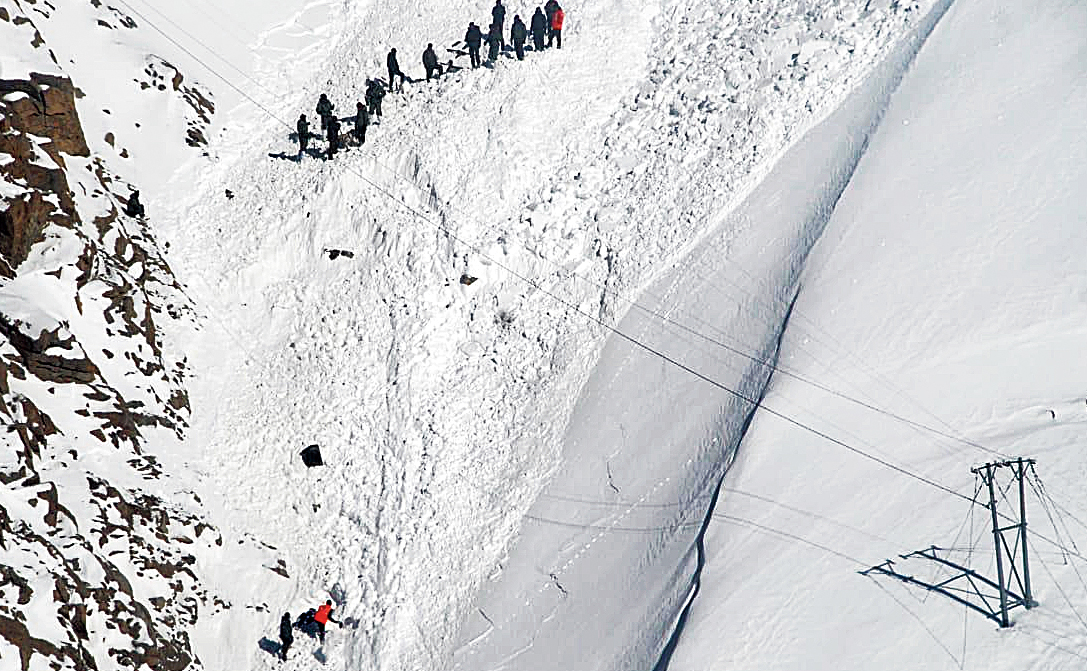 Five labourers were dead and five missing after an avalanche buried them at Khardung La in Leh on Friday morning as they dug snow, reportedly for a helicopter landing trial by Hindustan Aeronautics Ltd (HAL).

Searchers have recovered five bodies and are trying to rescue the rest, Tsering Namgyal, the Leh Autonomous Hill Development Council chairman, said. He said that all the 10 labourers were from the Zanskar area of Ladakh. He added that the chances of the five missing men having survived were slim.

Khardung La, whose topmost point is 18,000 feet above the sea level, has one of the world’s highest motorable roads and connects Leh with the Siachen glacier. Calamity struck the labourers around 800 metres ahead of the top, Namgyal said.

“Hindustan Aeronautics Limited officials needed snow for the (trial) landing of a new helicopter, for which they sent two tippers with 10 labourers to that place,” he told The Telegraph.

“The labourers parked the tipper near an avalanche-prone area and were busy collecting snow when the avalanche struck. Chances of the five trapped men surviving are slim.”

Namgyal said an inquiry had been ordered.

A senior official from HAL corporate communications told this newspaper that the company did not want to comment on the matter.

“In such matters, we usually don’t comment unless there is a proper clarification on whether we are engaged in any kind of work at that location,” the official said, declining to be named.

Colonel Rajesh Kalia, the defence spokesman in Srinagar, confirmed that 10 civilians had been buried under 20 feet of snow.

“The message of the unfortunate incident was given to the army detachment at Khardung La top at 7.45am by two civilian drivers. Immediately… all resources of the Fire and Fury Corps (the Leh-based 14 Corps) were activated,” he said.

Kalia said the army had deployed its aviation helicopters and called the Avalanche Panthers Teams (rescue teams) from the Siachen base camp and North Pullu.

“Rescue operations are still in progress. Since the run-out zone (the part of an avalanche’s path where the debris collect) is approximately 1,100 metres down the steep hillside, the operations may take some time,” he said.