At polls, bread thicker than Article 370 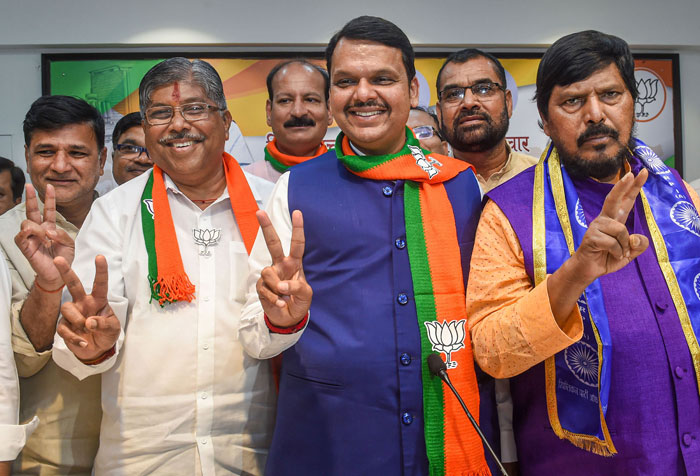 The Assembly poll results in Maharashtra and Haryana and a bunch of by-elections on Thursday sought to underline the importance of bread-and-butter issues over Hindutva nationalism by dealing punishing blows to the BJP, which declared itself the victor.

The stunning message was delivered in the middle of an economic downturn that the Centre had tried to deflect attention from through the abrogation of Article 370 in Jammu and Kashmir, and five months after the Narendra Modi-Amit Shah duopoly destroyed the Opposition and pulled off a spectacular victory in the general election.

The BJP, Shah declared, was set to return to power in the two states but the real story lay in the numbers.

Shah’s hubris-laden slogan of “Abki baar, pachhattar paar (This time, we’ll cross 75)” for the 90-member Haryana Assembly was shattered with the BJP ending below the halfway mark with a tally of 40 seats. If the party does hold on to power, it can only be on the back of unscrupulous games, not driven by the famed election-winning machine powered by Modi and Shah.

In Maharashtra, the BJP-Shiv Sena coalition managed only a simple majority with 162 seats in the 288-member Assembly, a loss of 23 seats from the previous tally.

The shock becomes apparent when placed against the claim by the ruling party of a two-thirds majority. At one point, BJP leaders were spinning dreams about their party scoring a majority on its own but, after the results, partner Sena spoke of a formula for “50:50” chief ministership.

On the campaign trail, Modi had tried to turn the state polls into a referendum on his government, particularly on the Article 370 decision. In Haryana, the Prime Minister had addressed many more rallies than initially scheduled. 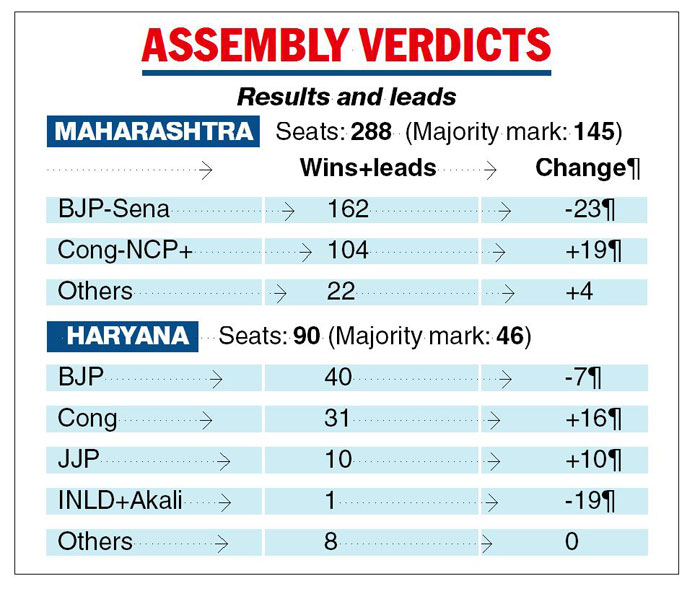 The BJP had hoped that just as the Uttar Pradesh victory of 2017 was touted as an endorsement of the demonetisation, a big show in Maharashtra and Haryana could be used to claim a thumbs-up for the Jammu and Kashmir decision. On Thursday, some leaders sought to seek solace in an assessment that the results could have been far worse had the Article 370 card not been played.

After the results, Modi and Shah claimed victory in both states.

On Haryana, Modi and Shah cited a 3 percentage point increase in the BJP’s vote share over the last Assembly polls in 2014 to buttress their claim. In Maharashtra, the return of the Devendra Fadnavis government was held aloft as a triumph.

The BJP’s vote share in Haryana in the 2014 Assembly polls was 33.24 per cent and now it stands at 36.5 per cent. But Modi and Shah did not mention that in the 2019 Lok Sabha polls, the BJP’s vote in Haryana had crossed a mind-boggling 58 per cent. Assembly and Lok Sabha elections ideally should not be compared but Modi had campaigned on national issues in the state elections.

Modi and Shah also skipped the fact that the Congress’s vote share had jumped more than the BJP’s, from just over 20 per cent in 2014 to over 28 per cent now.

In Maharashtra, the BJP-Shiv Sena’s combined vote share was over 47 per cent in 2014. It came down this time to 42 per cent. Compared with the Lok Sabha polls, however, the two parties managed to keep their vote share intact. The difference was that in 2014, the BJP and the Sena had contested separately.

In the by-elections, the biggest message came from Gujarat, the home state of Modi and Shah. By-elections to six Assembly seats were held, and the honours were shared by the BJP and the Congress. Alpesh Thakor, a former Congress MLA who jumped ship, lost.

The polls were held in the backdrop of an economic slowdown and an acute farm distress that were angrily brushed aside by the ruling party leadership. Modi and Amit Shah had sought to deflect attention by holding up the move to scrap Jammu and Kashmir’s special status.

The BJP’s performance looks all the more listless when viewed against the comatose state of the Opposition after the drubbing in the Lok Sabha polls.

A sulking Rahul Gandhi turned up for campaigning only at the last moment. Amid intense infighting, the battle was fought alone by the ageing NCP chief Sharad Pawar in Maharashtra and by satrap Bhupinder Singh Hooda in Haryana.

If the Balakot air strikes in Pakistan were used by Modi as a “Brahmastra” on the Opposition in the general election, the abrogation of provisions of Articles 370 and 35A to end the special status of Jammu and Kashmir was aggressively flaunted in the two Assembly campaigns by the top leaders, confident that it would snuff out whatever was left of the Opposition.

“This is an unopposed election. We are working hard only to achieve a two-thirds victory,” one BJP leader had said ahead of the polls.

The results, however, showed that the electorate in the two states, and in the by-elections spread across several states, had sought to judge the BJP state governments over the more pressing bread-and-butter issues and did not get swayed too much by the aggressive nationalist pitch.

In Haryana, a few top Jat leaders and ministers lost, suggesting the agrarian Jats had not swallowed the BJP’s nationalist pitch unquestioningly this time, five months after helping the BJP sweep the state.

In rally after rally in Maharashtra and Haryana, Modi had asked the voters to punish the Congress and the NCP for opposing the Article 370 decision. In one rally, he said the Opposition should “drown” in shame for saying Article 370 had nothing to do with the state polls.

“Had Article 370 worked, we should have swept the two states like the Lok Sabha polls,” a BJP leader said.

Another leader, however, differed. “It was only due to Article 370 that we have managed to save the two states. Without it (Article 370), we would have lost badly,” he said.