Anger, dissatisfaction among violence-hit Jahangirpuri residents ahead of Eid

How am I going to buy new clothes for my children. asks Akbar whose kiosk was among the many structures destroyed in the anti-encroachment drive by NDMC 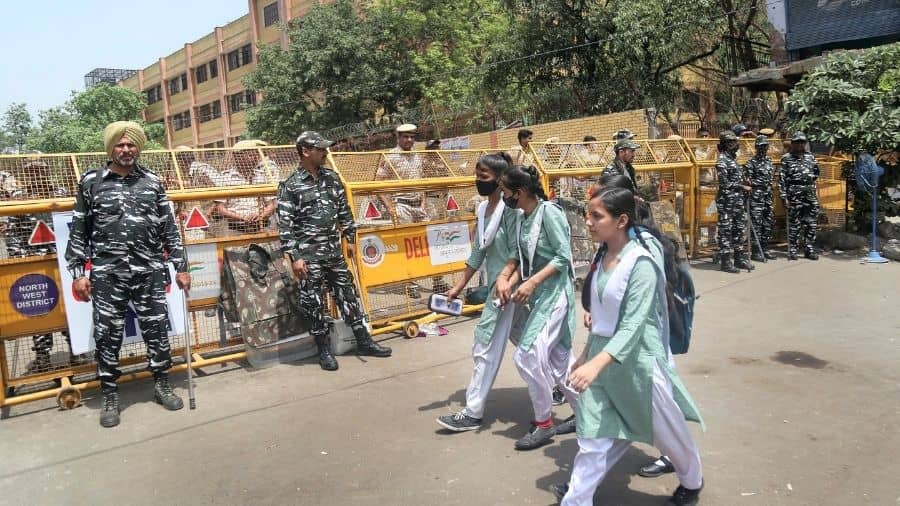 "My children are demanding new clothes on Eid, what should I tell them?" asks Sheikh Akbar sitting close to the ruins of his kiosk at Jahangirpuri's Kushal Chowk.

Akbar's kiosk was among the many structures destroyed in violence-hit Jahangirpuri during an anti-encroachment drive by the North Delhi Municipal Corporation (NDMC) on Wednesday.

For the past 15 years, the kiosk was the source of income for Akbar's family and now the rubble lying there foretells their shattered hopes and dreams.

Akbar is still processing the events of the last few days which have turned his life upside down. With the festival of Eid around the corner, the sole breadwinner of the family is worried about how he is going to buy new clothes for his children and other household items.

"This Eid is not the same. I wanted to buy clothes for children which I cannot do now. It is not feeling like a festival. Our livelihood is destroyed," said Akbar, who lives in a one-room set with his family.

He has three sons -- two in their teenage years and one a toddler. "I have a family to feed. With the source of our income gone, wherefrom should I bring the food for them. Two of my sons are in school. How will I pay their fees?" he sighed.

Akbar claimed that he suffered losses of around Rs 5-6 lakh as his kiosk was razed by the NDMC bulldozers. He said no warning or notice was issued before the demolition drive.

"I was at the shop when these clashes broke out. I shut down the kiosk and ran inside. And a few days later, we heard NDMC people are coming but we were told that they are to clear the road from scrap lying around. Nobody told us they will remove my kiosk too. If I had known this in advance, I would have emptied the shop. Everything is gone now. There were three fridges in the kiosk," he said.

Much like Akbar's home, the sombre mood has engulfed Jahangirpuri where clashes broke out last week and the whole area has been barricaded since then.

The violence has forced people to confine themselves to their homes as police, along with Central Reserve Police Force (CRPF) and Rapid Action Force (RAF) personnel, are manning the roads.

The majority of the shops in the area are still lying closed and businesses are not operating.

A resident of G block, Aslam, said usually there is a lot of hustle-bustle around Eid but the violence has ruined the festivity spirit.

"Around this time of year, people come out and shop for Eid. And there is a mood of cheerfulness in the area. People buy new clothes and prepare for Eid. But this time it is not the same," he said pointing toward the shuttered shops and barricaded roads.

"It is like living in some kind of jail. Festivals are meant to be enjoyed but we are unable to do so because of the current situation," he added.

Salma (28) was standing near a barricade in the H block and was visibly angry.

When PTI team approached her, she accused the police of ruining the festival.

"We want to celebrate our festival with the same freedom Hindus are allowed to celebrate theirs. They (police) are preventing us from enjoying our rights. No shop is open and no business is being carried out. How are we supposed to earn money and buy things?" she asked.

A shopkeeper in C block, who does not wish to be named, said business has been impacted badly.

"This time sales were supposed to triple and quadruple. But violence has impacted everything. I was very hopeful for the coming Eid as the economy was finally getting back on track after two years of the Covid pandemic. Now this happened," he said.

DCP (northwest) Usha Rangnani on Friday said the police will facilitate the opening of shops and businesses in the area.

"I am happy. Peaceful existence between two communities must remain. I have never stopped shops in H and G blocks from opening. I don't know why these shops are closed. We will facilitate the opening of shops and businesses in these blocks," she said.