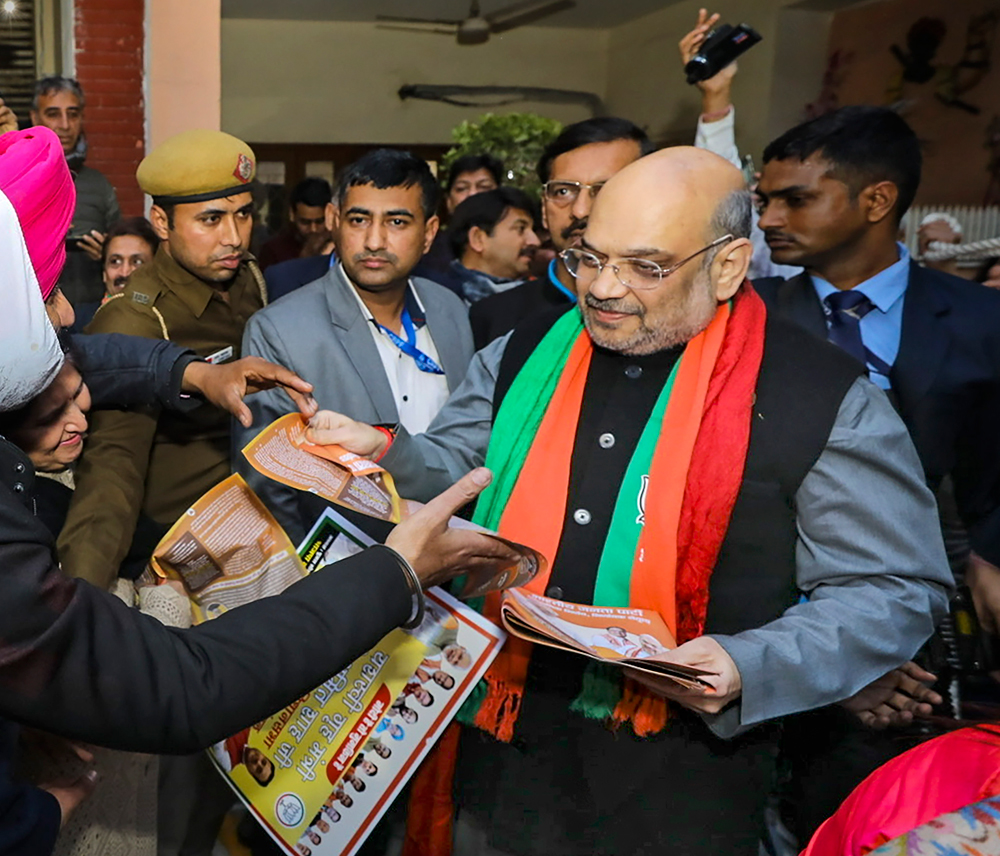 Amit Shah on Sunday knocked at the doors of some residents of south Delhi’s Lajpat Nagar, originally established to house Hindu and Sikh refugees from West Pakistan, to canvass support for the Citizenship (Amendment) Act and counter the widespread opposition to the law.

Before the BJP chief and Union home minister launched the “door-to-door campaign”, he addressed a meeting where he asked party cadres to raise the slogan of “Bharat Mata ki jai” so loudly that the “kaan ka parda (ear drums)” of those opposing the CAA “phat jaaye (gets ruptured)”.

The meeting of polling booth-level workers of the BJP, whom Shah called “senapatis (commanders)” and “dearer to me than my life”, was meant to gear up for the electoral battle in Delhi next month.

The twin events indicated Shah’s intent not to betray any signs of conciliation in the face of intense protests across the country against the CAA-NRC and instead go all out with a counter-offensive and also tap it for electoral gains in Delhi.

The BJP has claimed that its door-to-door campaign on the CAA is to shatter the “misinformation” being spread about the law by the Opposition, particularly among the minority community.

Shah, however, chose a predominantly Hindu-Sikh locality to launch the campaign and not a minority-dominated area to dispel the “fear” in their minds.

Accompanied by party leaders and workers chanting loud slogans of “We support CAA”, “Amit Shah zindabad”, “Modi hai toh mumkin hai” and “Hindustan zindabad”, Shah approached residents with pamphlets containing “myths” and “facts” about the CAA and asked them to give a missed call to show their support for the amended law.

“So much misinformation is being spread…. You give your support to the law,” he told men and women and then quickly asked them to take out their mobile phones and give a missed call on the number to show their support for the CAA. “Your support will directly reach Modi,”he said.

Lajpat Nagar appeared to have been chosen with a purpose against the backdrop of the attack on Gurdwara Nankana Sahib in Pakistan.

As peaceful protests against the CAA-NRC continued in the Muslim-dominated Jamia and Shaheen Bagh areas, barely 7-8km away, Shah selected the predominantly Hindu-Sikh locality to exhibit majoritarian support for the CAA and arouse people’s anger against the Opposition.

Earlier, addressing Delhi party workers, Shah spoke about the attack on Gurdwara Nankana Sahib by a mob and said those claiming there was no threat to minorities in Pakistan should open their eyes.

“This (the attack) is an answer to all those opposing the CAA. Tell me, if these Sikhs who were attacked will not come to India, then where will they go?” shah asked.

However, the CAA has a cut-off date of December 31, 2014, so it will not apply to any Sikhs or Hindus trying to flee Pakistan now.